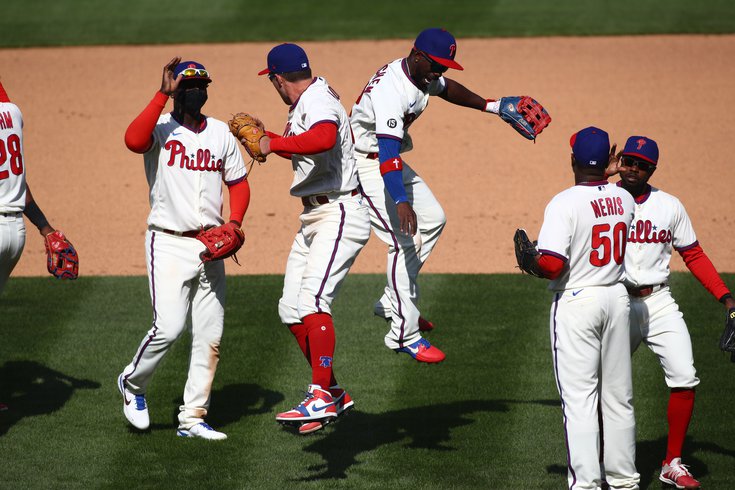 The Phillies swept the Braves this weekend, and looked good doing it.

The Phillies have completed their first series of the season and since we live in Philadelphia — there's a good chance their success from the first three games will send fans' expectations into the stratosphere.

Yes, they did sweep the NL East favored Braves which obviously means they are the front-runners to win the World Series, sports books be damned.

Unlike last season, where three games actually represented 5% of the entire season, the Phils are back to playing 162 games.

They also could get a boost from the baseball gods, as the Mets have been forced to sit idly by and hang around since spring training ended, as COVID issues with their first series opponent the Nationals has pushed their Opening Day to Monday in Philly, potentially leaving them rusty and out of whack.

So with a lot of baseball left, here's a cheat sheet on what the team accomplished and how we are feeling as they prepare for series No. 2 against the Mets on Monday:

Do they have 3 aces?

Through six innings on Opening Day, Aaron Nola was dealing. He had yet to allow a run, spread out six strikeouts and handled several jams with poise and confidence. But then, back on the field for the seventh, Pablo Sandoval took him deep, the bullpen took over and Jean Segura eventually hit a walk-off single. Nola looked fine in the seventh, making one mistake (which cost him a win). Nola has a frustrating blemish on his record, which many have in this day and age of pitching specialties, having never thrown a pitch in the ninth inning in his entire career. When Nola was yanked he had only tossed 84 pitches (with two out in the seventh). He has the efficiency and the stamina, it seems, to potentially crack that barrier in 2021.

And then we have Wheeler, who did get through the seventh inning in his shutout performance, joining with Archie Bradley and Hector Neris to blank the Braves in Game 2. His stuff was dazzling, as he wrung up 10 batters and, like Nola, still had yet to get anywhere near 100 pitches in his outing. Perhaps later in the year or in a different circumstance he'd be allowed to try and finish what he started, but Wheeler was a true ace on the mound dominating so thoroughly that he let a single base-runner reach in his outing while throwing 99 mph late into his start. Oh, and Wheeler also drove in two runs with two hits in three at bats which is pretty impressive for a pitcher.

Finally in the series finale, Zach Eflin lived up to his preseason hype going seven strong himself while allowing a single run and striking out eight with four hits in his debut. Maybe the Braves just came out flat? Or maybe the Phillies have something great at the top of their rotation.

The bullpen is better

Last season, the Phillies had a bullpen ERA of 7.06. Their pen was almost certainly the reason they missed out on an expanded postseason spot. After much effort and cash went into crafting a completely new bullpen — save for Hector Neris (who has been phenomenal as the ninth inning man so far) — it has shown dividends in the early going.

The Phils' 'pen has yet to allow a run in 7.1 innings (an extremely small sample size, yes), but the stats are not as impressive as the eye test is. The bullpen has been dominant, it's been confident, and they have been able to retire some of the best hitters in the NL East in clutch situations. In contrast to last year, when they couldn't find enough bodies to throw onto the mount, they have used just seven pitchers (including the three starters) through three games, the fewest in all of MLB by a large margin. They also have the best strikeout-to-walk ratio, best WHIP and fewest batters stranded thanks to their hot start.

It's a great beginning, and if it continues, watch out — though the team's ERA right now, 0.64, is surely just a blip.

The first home run of 2021 went to — not Bryce Harper, not J.T. Realmuto — and not technically to any Phillies offensive starter. It was Andrew Knapp who went yard, and it took three games for the Phillies to find the seats in the typically hitter-friendly Citizens Bank Park.

That the Phillies are 3-0 having hit one measly solo homer is a testament to their patience at the plate and their ability to get on base when it counts.

The power should pick up, particularly as the weather gets nicer, but that the Phillies are last in the league in homers and their nine RBI are the sixth fewest is a testament to just how good their pitching was against the Braves.

While the Marlins are off to a slow start, and the Mets and Nationals are still dealing with COVID issues and have yet to take the field, the Phillies have given themselves a nice little cushion in a division many predict will be the best and most competitive in baseball.

A handful of games ahead, with more than 150 games to come, is not much to boast about but it's something, and as Phillies fans know from seeing their beloved club collapse in consecutive seasons where a playoff berth looked to be within reach, every single game counts.

If you watched any of the Phillies first three games, when they were at the plate, you are aware that there is a general feeling of confidence that is emitted from the team when it's at bat. The lineup is kind stacked, and when the Phils get a man on, like, say, Harper, knowing that Realmuto and Bohm and Gregorius could all have a chance to knock that man in is an encouraging thought.

There are few easy outs on this team, and through three games, nine hitters have multiple hits already — and six Phillies hitters have an on base percentage of .385 or higher. Their on-base rate as a team, .315, is the 8th best in baseball so far. We should mention they do have the fourth most strikeouts in or any offense, and are ahead of a bunch of teams which have played more games than Philly has, which is a negative early trend to keep an eye on.