After winning four of five, Phillies get wake-up call from Nationals 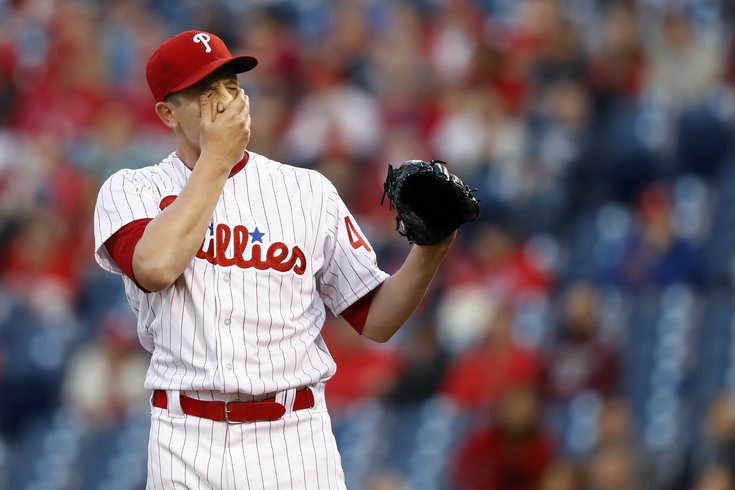 The Philadelphia Phillies never stood a chance. Just a day removed from one of the most impressive outings you'll ever see, courtesy of Vince Velasquez, starter Jeremy Hellickson delivered one that he has to hope you'll soon forget.

Or, as manager Pete Mackanin put it after the game: “What a difference one game makes.”

Facing a Washington Nationals team that had won five straight entering its series at Citizens Bank Park, what had been the Phillies' strength so far this season -- their starting rotation -- turned into a liability on Friday night as Hellickson surrendered five runs in the top of the first inning en route to a 9-1 loss.

The scoring started with a leadoff homerun by Michael Taylor and didn't end until after the Nats had batted around -- including a bases-clearing, three-run double by old frenemy Jayson Werth and another double by opposing pitcher Joe Ross, who also tossed 7 2/3 scoreless innings. That inning alone caused the Phillies starters' collective ERA, which had been the best in baseball entering play at 2.14, to rise to 2.81. It also ended a stretch of 23 scoreless innings by Phillies starters.

“The first inning set the tone for the whole game,” Mackanin said. “It’s tough when you get behind early like that. Hellickson wasn’t at his best, made a lot of mistakes with balls over the plate.”

Hellickson, who needed 45 pitches to get out of the first, would surrender another (unearned) run in the third before being lifted for a pinch hitter in the bottom of the third inning. His final line looked like this: 3 IP, 6 R (5 ER), 7 H, 3 K, 1 BB, 79 pitches.

"I didn't command [my pitches] like I needed to," Hellickson said after the game. "That's an aggressive lineup and I didn't make a lot of quality pitches."

And here's what the starting rotation's ERA looked like when allwas said and done:

But that was only part of the story. Here are some more observations from the game...

•    The Phillies (5-6) managed just 4 hits all night (Odubel Herrera, Cedric Hunter, Freddy Galvis and Ryan Howard) and had just seven batters reach base (two on walk, one on an error). Prior to the game, Mackanin talked about trying to jump start the offense, but that didn't happen in their first game against the Nationals. Emmanuel Burriss got his first shot at the leadoff spot with Cesar Hernandez getting the day off, but he failed to reach base in four at bats.

And things aren't going to get any easier the rest of the series. On Saturday, they'll face Max Scherzer. On Sunday, it'll be Gio Gonzalez. Yikes.

•    The lone Phillies run came courtesy of a Ryan Howard home run in the bottom of the ninth. It was the Phillies' only extra base hit of the night and was Howard's fourth HR of the season.

"It's kind of surreal," Howard said after the game when asked about tying the Hall of Famer. "It's very humbling."

You can watch it here.

•    The Nationals, meanwhile, put on a hitting clinic down at the park. They finished with 16 on the night and got at least one hit from all nine spots in the order, including multiple hits by four different batters (Michael Taylor, Bryce Harper, Jayson Werth, and Danny Espinosa).

But it was Harper with the biggest game of all. He finished 3-for-4 with a home run, two runs scored and a pair of RBI.

•    Jayson Werth also had a pretty nice night -- which only made the Phillies fans boo louder -- with a pair of doubles in five at bats. He also knocked in three runs and scored two of his own.

•    Darin Ruf (shoulder) made an appearance in the eighth inning as a pinch hitter after being sidelined since Monday's home opener loss to the Padres. He lined out to left field, but also made some really good contact on a ball he roped into the club boxes down the left field line. Mackanin said prior to the game that he would be available off the bench in the first two games of the series and will likely return to the starting lineup on Sunday against lefty Gio Gonzalez.

•    It was Jackie Robinson Night down at the park (and across the league) as the team paid tribute to the man who broke baseball's color barrier 69 years ago. It was a special one for the Phillies, especially considering the city only recently issued a formal apology to Robinson -- a little late for that, no? -- for the way he was treated as a visiting player.

Who's #42 on the Phillies? That guy sucks