What they're saying about the Phillies: The moment arrived 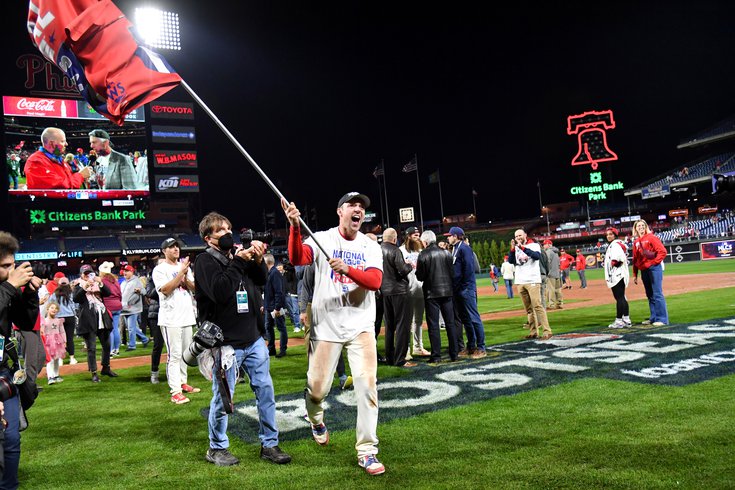 Rhys Hoskins waves the NL champions flag after the Phillies beat the Padres 4-3 in Game 5 to clinch the NLCS and go to the World Series.

There was no louder place on the planet this weekend than Citizens Bank Park and no happier one than the streets of Philadelphia.

Years of heartbreak, bad baseball then terrible baseball, multiple false starts, and multiple late summer runs that stalled out all led up to a moment that even as recent as a few weeks ago, many wondered would ever arrive.

Ranger Suárez, pitching out of the bullpen for the first time in well over a year, threw a breaking ball that San Diego's Austin Nola could only make a pop fly out of. That was it.

Suárez threw his hand up to signal for the fly ball, catcher J.T. Realmuto did too, and as the ball hung up there for what felt like forever, both had their arms up in victory the second it fell into Nick Castellanos' glove in shallow right.

The place erupted, as it had numerous times this month already.

The moment arrived. The Philadelphia Phillies are National League champions and will play the Houston Astros in the World Series with Game 1 this Friday.

"It's a got a good ring to it, doesn't it?" first baseman Rhys Hoskins told FOX Sports Ken Rosenthal after the clinching Game 5, with Harry Kalas' High Hopes blasting in the background. "We're gonna celebrate. We got some work to do obviously, still, but man, National League champions...What a beautiful thing."

There was a whole lot to be said after the final out, so let's just dive right in.

Here's what they're saying about the NL champion Philadelphia Phillies...

He launched Robert Suárez's pitch the opposite way over the fence in left-center and in an instant, had the Phillies go from facing a potential Game 6 back in San Diego to three outs away from a trip to the World Series.

"The swing of his life!" as Joe Davis exclaimed on the FS1 broadcast. No exaggeration.

The moment arrived and Harper met it. But for that moment to arrive, all the little things that happened over the past several years needed to. Something The Athletic's Jayson Stark pondered in his column following the 4-3 series-ending win.

If Harper went elsewhere in free agency, if Dave Dombrowski never arrived, if MLB never changed the playoff structure, if the decision to promote Rob Thomson was never made, the celebration isn't happening right now.

Two and a half weeks ago, most of America — not to mention most of the town they play in — viewed them as a postseason hanger-on, just waiting to get bounced by One of the Good Teams. But that was not how their saga was destined to turn out.

If it wasn’t clear then that the planets were lining up to make a baseball miracle happen, it didn’t take long.

They swept the Cardinals. They upset the Braves. They outplayed the Padres. And now, somehow, here they are, the last National League team still playing. Amazing.

Two and a half weeks ago, this was impossible. Now, it’s magic.

The powerhouse 2011 Phillies never reached the World Series. Neither did the 2010 Phillies, who traded for Roy Halladay and won five more regular-season games than the 2008 team that showered in ticker tape. But somehow, this team — the 2022 afterthoughts — are on their way. How could this have happened?

Ranger Suárez had earned his spot in the starting rotation, but after pitching the Phillies to a win in Game 3, he had no problem jumping back into the bullpen as an extra reliever.

Suárez doubted he would actually have to come in, but on the way to the ballpark Sunday, Seranthony Domínguez made it clear: He didn't want to go back to San Diego. "Be ready to pitch."

In the ninth, his name was called to record the final three outs. He got them, and the Phillies were off to the World Series.

It felt fitting, in a way, that Suárez was the one to send his team to the World Series. When the left-handed pitcher was moved from the Phillies’ bullpen to their rotation in 2021, because of injuries and subpar performances that caused some reshuffling, he said he wanted to fill a need. And on a rain-soaked Sunday afternoon, when his name was called, he filled that need, yet again.

“Whatever they need me for, that’s why I’m here,” Suárez said on Sunday. “Whatever the need is, I’ll be there for them.” [The Inquirer]

Everyone on the Phillies' roster conquered demons this postseason. Rhys Hoskins arguably conquered the toughest of them all.

But this postseason, the NLCS especially, has dramatically rewritten his history. He homered four times in the series, including twice in Game 4 and to open the scoring in Game 5, setting a franchise record as he finally helped lift the Phillies to the expectations they had always failed to meet in the past.

From the moment first baseman Rhys Hoskins became a Phillie, he heard the names and he saw the photos. Those legends had left quite the legacy as members of the 2008 World Series-winning ballclub.

Hoskins is a step closer to joining franchise folklore after Philadelphia’s National League Championship Series-clinching 4-3 victory over San Diego on Sunday in Game 5 at Citizens Bank Park. The Phillies captured the NL pennant with a 4-1 series win to reach their first Fall Classic in 13 years.

“It's everything,” said Hoskins, whose four NLCS homers were the most by a Phillie in team history. “This organization is the one that believed in me and gave me an opportunity to impact the city of Philadelphia in any way. There's been a lot of people that have had a lot of hands in this going back since I got drafted, but definitely since I got here in 2017. A lot of people that aren't here that put in work, laid the groundwork for the people that are here to succeed, to dream and to win.” [MLB.com]

"How can you not be romantic about baseball?"