If the Phillies win today they earn a spot in the World Series, and some unconventional preparations are underway 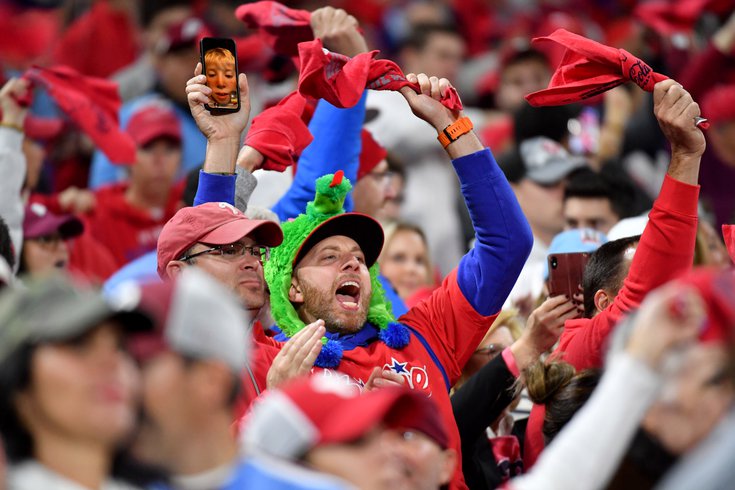 The Phillies are one win away from the World Series. As players warmed up and fans found their seats in the stadium (or on the couch), city officials began their own unconventional preparations.

Game 5 of the NLCS is happening today at Citizens Bank Park, and with the Phillies up 3-1 in the series, a win at home would send the team to the World Series and fans into a celebratory frenzy. With this in mind, poles in South Philadelphia have already begun being greased to deter fans from climbing them in case of citywide festivities following the game.

One Twitter user captured a video of light poles being greased ahead of yesterday's win.

They are greasing the poles in Philly! Go Phillies! #RedOctober #phillies #philliesnation pic.twitter.com/9YFEYrQAIz

What’s the best way to launder clothing that has pole grease on it? Asking in advance as a mom of a Philly teenager

“Can you imagine them putting grease on the light poles in San Diego so people wouldn’t climb on them? That would never happen. That place (meaning Philly) is disgusting.”

Me in my head the whole time: pic.twitter.com/yBfqXCEfMB

Tis the season to grease the poles #RingTheBell

"Light poles are being greased as a preliminary public safety measure," city spokesperson Kevin Lessard said in a statement to the Inquirer.

Other safety measures include barricades being erected at key locations in the city. Police were barred from taking time off through Tuesday in preparation for raucous fan celebrations, and officials have warned that open container laws will be enforced if the festivities take over city streets.

Poles along South Broad Street were also greased back in 2009 during the Phillies' last World Series appearance. The move is more recently reminiscent of officials slathering poles with Crisco during the Eagles' victorious Super Bowl run in 2018. Eagles fans were not exactly deterred by this. In fact, some saw it as a challenge.

Who are we kidding, obviously the grease doesn't stop eagles fans. pic.twitter.com/GhlNaZcw4j

While greasing light poles may not necessarily prevent fans with a knack for climbing, it does serve to raise the exciting anticipation of the Phillies possibly becoming National League champs and heading to the World Series again for the first time in 13 years.

Given the fact that the roaring fans in the stadium Friday night could be heard from over a mile away, it's safe to say the excitement level is already through the roof, though.

I live over a mile from the stadiums in south philly. This was the final out of the game #Phillies #RedOctober pic.twitter.com/E63SUFnrdh