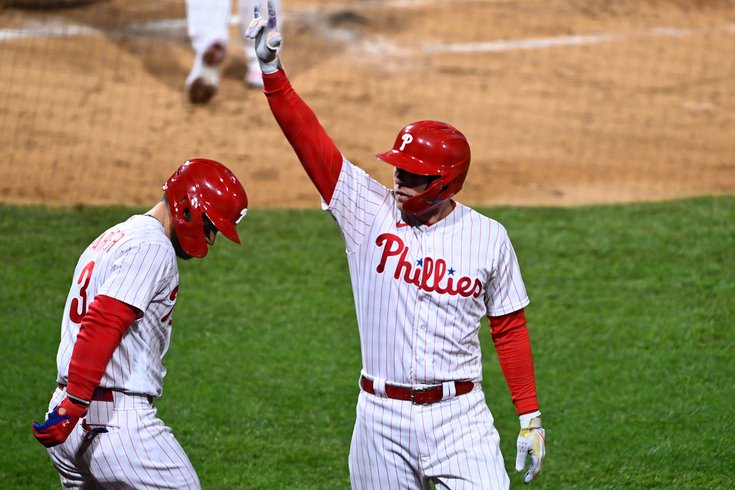 Rhys Hoskins may never have to pay for a drink in Philadelphia again.

The Phillies had a dream back in April: that a murderer's row of sluggers could carry them to a World Series.

Saturday night's 10-6 win over the Padres to take a commanding 3-1 NLCS lead was the best example of that yet, and it might have also been the most memorable Phillies game played in the last decade (maybe even longer?).

The top five hitters in the order combined for nine hits, nine runs, nine RBI, four home runs and three walks. Rhys Hoskins hit two 2-run homers in clutch spots to help the Phils overcome a 4-0 first inning hole. The stadium felt like it was going to bust several times over from a red sea of energy and enthusiasm. This is what World Series champions feel like.

But we're getting ahead of ourselves. The Phillies still need to seal the deal with a fourth win to advance to the World Series next weekend (likely against the Astros) and they'll have an opportunity to do just that Sunday at 2:37 p.m.

Before that games kicks off, let's take a look — as always — at the good, the bad and the ugly from one of the best games ever played in Citizens Bank Park:

• Rhys Dean Hoskins is headed for Philadelphia playoff legend status. After a top of the first that couldn't have gone much worse, a Kyle Schwarber single that beat the shift gave Hoskins the opportunity to get Citizens Bank Park hopping again, and he did just that:

And then he did it again, with Schwarber once again on base and the Phillies trailing (in the fifth):

Hoskins has been on the outs with fans for a while, due to a lackluster defensive acumen. He's also been frustratingly inconsistent at times and had a very slow start to the postseason. But he hit one of the most momentous home runs I have ever seen in the NLDS, and he hit another one to turn a potential disaster into a two-run game very early on. Keeping these fans loud and engaged is a big piece of winning playoff baseball at home, and Hoskins seems to finally be vibing with the Philadelphia faithful. Did he earn himself a contract to say in Philly? Is that crazy to ask?

• Okay let's keep it going. Bryce Harper is the reigning NL MVP and he simply can't stop playing that way. His RBI double cut the Padres early first inning lead to a single run and knocked starter Mike Clevenger out of the game.

Bryce is built for the postseason pic.twitter.com/PcsYwxpMzY

And would you believe history repeated twice in the same game? Harper, two batters after Hoskins' second 2-run homer, hit his second RBI double to give the Phils their first improbable lead of the ballgame.

More Bryce Harper Facts: With 10 extra-base hits, he's tied for the most by a #Phillies player in a single postseason. But Harper has done it in only 41 plate appearances so far. Ryan Howard got 64 PAs in 2009 and Jayson Werth had 62 in 2008.

Nick Castellanos hit a ground ball with some mustard on it in the right spot up the middle to plate Harper to extend the lead to 8-6, and an inning later Schwarber his his third homer of the series to make it 9-6. And then J.T. Realmuto blasted a dinger to left field. It was a scoring frenzy.

• Castellanos was the catalyst for the Phillies' earlier push to tie it at four, hitting a double in the fourth and scoring on a Bryson Stott single. One of the coolest things about this 2022 team is that no one would be been surprised to hear they overcame a 4-0 deficit in four innings. No one would be surprised if they were down 8-0 either. But there is so much talent in the lineup — and the Padres are dealing with the same scheduling issues the Phillies are, so you just knew there would be some runs scored in this one. Hope you banged the over.

• After using their best pitchers in high leverage spots in their Game 3 win, the Phillies had very slim reserves in the bullpen — particularly after the squad pulled Falter in the first. Connor Brogdon, Andrew Bellatti, Noah Syndergaard, and Robertson all pitched in to keep the Padres at bay in their respective appearances, and Zack Eflin retired the final three hitters in the ninth.

• The Phillies have a weird pitching staff and it's made for some very touch calls for manager Rob Thomson. With two true aces (in Aaron Nola and Zack Wheeler), and a third reliable starter in Ranger Suarez, the Phillies have a three-man rotation that can probably handle most of the starting duties in a seven-game series. In the NLDS clincher against the Braves, Noah Syndergaard started a bullpen game and despite Bailey Falter having sat on the bench for the last two weeks, Thomson decided he, not Thor, was the best man for the job.

In a rare twist for the manager of the year candidate, Thomson was wrong in giving Falter the nod. The young pitcher didn't get out of the first and retired just two batters. Who would have thought starting a guy who last pitched on October 5 (and last went more than an inning on September 30) might not be a good idea? But as it often seems to, things worked out anyway.

• For the first time this series, the Padres struck first. With two outs in the first, Manny Machado hit a no-doubt home run right over Schwarber in left to give San Diego control of the game early. A Brandon Drury double gave the Padres two more runs putting the Phillies on the ropes and an RBI bloop from Kim Ha-Seong made it 4-0 before Philadelphia had even gotten to take a swing on offense. You all know what happened after that.

• Juan Soto's first homer of the postseason came at a pretty clutch time, a two-run bomb off of Brad Hand in the fifth inning that had no chance of staying in the ballpark. For this fleeting moment, it felt like the series could go the other direction. The bullpen has weaknesses, and Hand was a lefty arm sent in the game to neutralize Soto. It was another pulled lever that failed for the Phillies decision-makers.

• I have no earthly idea how any pitchers will have any energy to pitch in Game 5 on Sunday, but that's Sunday's problem.

• I love baseball. I've been ridiculed as a "boomer" from colleagues for fighting against DH expansion. But I don't care how much you love the game, a 47-minute inning is just brutal. The first frame lasted the same length as an entire half of pro soccer. At least I was stuck here with 45,000 friends.