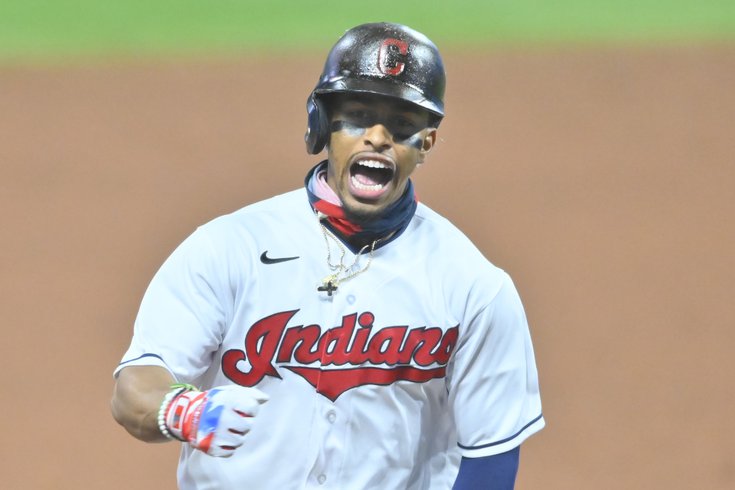 Francisco Lindor will be a tough out for the Phillies as a member of the Mets in 2021.

The offseason is approaching its end with spring training around the corner, and the Phillies are expected to make a big of a splash this week — if you believe what you read.

They may poised to re-sign stud catcher J.T. Realmuto. [UPDATE: They did.]

They may be bringing in a free agent shortstop — one of either Didi Gregorius, Freddy Galvis or Andrelton Simmons.

And they may still add some bullpen or starting pitching help.

But that may not be enough. In the months since the 2020 season ended, a truncated 60-game season that saw a collapsing Phillies miss the playoffs, the entire NL East has seemingly improved. Every team except the Phillies, that is.

The Phillies currently have +3000 odds to win the World Series, 14th best in baseball. Realmuto's return and a shiny new shortstop would likely improve those just a bit. But in the race for the division, that might not be the case. Here are the odds according to PointsBet today, as compared to back in October:

As you can see, the Phillies not only dropped from third to fourth, but they also find themselves with some substantial space between the top two teams in the division. The Mets took a huge leap forward as the Phillies were descending.

The pressure is on for the Phillies to spend the money they have left (thought to be somewhere around $50 million) to put together a competitive roster, which is what new president of baseball operations Dave Dombrowski says they plan to do.

“There’s too many good players on the Philadelphia Phillies to think about transitioning," Dombrowski said last week, after the team introduced their biggest signing of the year: a relief pitcher. "We’re thinking about winning.”

The teams the Phillies will be trying to win the division against will be some steep competition. Here's a brief look at where each one stands as the offseason nears its conclusion:

Outlook: The Braves are the returning champions and have an anchor of superstars in Freddie Freeman, Ronald Acuna and Max Fried. They added some depth in the rotation and bullpen, which is more than enough to keep them favored in the division, though the Mets are coming on quite strong (more on that in a second). Morton is the headliner from their free agent haul, but they were forced to let a lot of veterans walk in order to keep enough cash around to sign five of their key younger players and avoid arbitration.

Outlook: The Mets now have one of the best shortstops in the league, an improved pitching staff, and an improved catcher situation all while keeping the lion's share of their key players from last season. And they're not even done.

Adding Trevor Bauer to a starting rotation that already includes Jacob DeGrom and Marcus Stroman? Not a bad way to hedge against a potential loss of the still injured Noah Syndergaard for a large part of the 2021 season. The Mets have a deep lineup too, and have become a second true contender for the Phillies to worry about in the NL East.

Outlook: The Nats haven't lost a lot and brought in a slugger in Schwarber who can play DH or the corner outfield, as well as Bell, who had 37 homers two years ago in Pittsburgh. With more power in the lineup, they are hoping they can give some more support to a loaded pitching staff that includes Stephen Strasburg, Max Scherzer and Patrick Corbin. Oh, and they still have MVP candidate Juan Soto.

[UPDATE: As we mentioned in the intro, the Phillies indeed signed free agent catcher J.T. Realmuto to a five-year deal, according to multiple reports. Read more here.]

Outlook: The Phils have glaring holes at shortstop and catcher. They lack depth on offense and need another starter or two to help assemble a competitive starting rotation. They've spent the offseason so far focusing on the worst bullpen in baseball history, adding Bradley as well as a handful of other marginal acquisitions for the 'pen. Are they feeling the heat to pony up the dough to finally end the Realmuto saga — and bring him back — once and for all?

JT Realmuto situation feels like it’s coming to a head. Phillies — believed at about $110M — are trying to close the deal. Braves and Realmuto said to have mutual interest, as @ByRobertMurray reported. But Atlanta is thought to prefer shorter deal and has d’Arnaud thru ‘21.

Outlook: Miami isn't making any noise this offseason, but they are coming off of an unexpected postseason berth and have a lot of young talent. Former Phillies top prospect (and, ironically the key piece on the Realmuto trade a few years ago) Sixto Sanchez projects as one of their top starters.