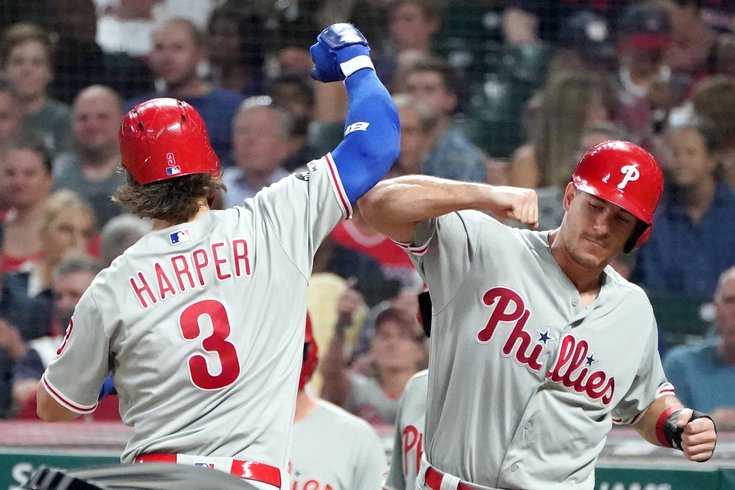 The Philadelphia Phillies and JT Realmuto are in agreement on a 5 year $115.5 million dollar contract. Pending physical. Per source.

Inking Realmuto for five seasons is a win for the Phillies. He'll be 34 when the deal is up, and catchers often decline more quickly than other players. They also were wary of being too committed to too many players well into the future — they already have Bryce Harper under contract for the next 11 seasons.

The catcher was first acquired via trade from the Marlins in 2019, costing the Phillies stud pitcher Sixto Sanchez who has since become a top of the rotation starter in Miami. The pressure was high on Philadelphia to make that trade worthwhile, and even a regime change couldn't stop the Phillies from making what most would say is the obvious decision.

The Phillies reportedly had a similar offer on the table for Realmuto, 29, last offseason, but negotiations never really took hold and the backstop played under an arbitration figure of $10 million in 2020. The pandemic may be partially responsible for why it took so long for Realmuto to find a home for the next half decade, as teams had no idea what their revenue figures would look like and the Phillies were understandably cautious.

Realmuto suitors dropped like flies, with the Mets, Yankees, Astros, Dodgers, Padres and other teams deciding to focus their cash reserves elsewhere. The Phillies got lucky, as their waiting game seems to have paid off. The Braves were rumored to have been interested as well, but that fit never made sense (as they have a silver slugging catcher already on the roster).

On the field, Realmuto has been as good as advertised and deserves to be paid like the best catcher in baseball. He has a .278 career batting average, .455 career slugging percentage and averages 21 homers and 79 RBI per 162 games. That's good for anybody, but add that he plays a premium position and is perhaps the best defensive catcher in the league and you can see how valuable he really is.

The Phillies already added a relatively big-ticket reliever in Archie Bradley — will Realmuto conclude their free agency moves? Even after signing Realmuto and Bradley, the Phillies have room to add a starting pitcher or a shortstop. More moves may be necessary to compete in the NL East, a division which, prior to signing Realmuto, the Phillies had the worst odds at winning (according to TheLines.com's consensus odds).

So what do the Phillies have left to spend now?

Realmuto will earn $20 million this year, and equal payments for the last four years. There are no opt outs or option years in the $115.5 million contract.#Phillies

Adding Realmuto's $20 million this season brings the team's payroll just around $176 million. He will reportedly then earn $23.875 million in the years following.

The team has around $28 million before they reach the luxury tax threshold (which prior to 2020 was $204 million). Expect them to look for a veteran bargain (under $10 million) shortstop, and some depth at catcher over the next couple weeks with their remaining payroll.

We'll have more as this story develops...