In the eighth inning of a 3-1 Phillies win over the New York Mets on May 8th, Chase Utley grounded into a double play and saw his average drop down to a hideous .099. He heard some very audible boos from the home fans heading back to the dugout, and at that point it was probably fair to wonder if he’d be able to recover to submit a respectable season.

“Obviously the first month didn’t go as planned, but you can’t really change that,” Utley said. “You’ve got to continue to move forward. The last month or so has been a little better, and you just try to build on it.”

“A little better” is a pretty big understatement, but there were always clues between the lines that Utley could at least somewhat turn things around. Mainly, his BABIP (batting average on balls in play, a stat that tries to describe the relative luck involved in what happens to a baseball after it leaves the ball) was unsustainably low. Utley’s was always eventually going to have a few bloopers drop in for hits at some point.

Problem is, most fans and Utley himself to an extent don’t give two [redacted] about his BABIP. They want to see hits, and then they want ‘em to keep on coming. For a hitter that is in the lineup every day, it has to be difficult to stick with the same approach when it’s May 9th and the first number of your batting average is a zero, regardless of whether you’ve been unlucky or not. For a six-time All-Star and World Series champion who has experienced so much success in his career, the whole thing really had to be a trip.

“It became a little frustrating at times,” Utley admitted. “But you know you’re putting some decent at-bats together hitting balls maybe not perfect, but well enough where you feel like you may deserve a hit here and there. For whatever reason, they weren’t really falling. You try not to change too much, but mentally it can be tough.”

Here’s another stat courtesy of the nice little post-game notes packet the Phillies hand out: Utley’s OPS of 1.033 over his last 16 games is tenth in the National League over that stretch, despite not hitting a homer since May 1st. That changed when he drilled a Johnny Cueto change-up into the right-field seats in Tuesday’s 5-4 walk-off win over the Cincinnati Reds.

Besides the homer, Utley had a productive night with the stick in which he got on base three times and hit three balls hard. Even with the homer, the one time he didn’t hit the ball hard might stand out the most due to its uniqueness. In the first inning, seeing that the Reds had an aggressive shift against him where third baseman Todd Frazier was essentially playing shortstop, Utley dropped down a perfect bunt that died right around third base in fair territory.

There’s a school of thought that power hitters (which Utley isn’t anymore, but whatever) shouldn’t bunt against the shift because it takes them away from their strengths. If you’ll recall, Utley tried to drop a bunt down in the first inning of Game 1 of the 2008 World Series against the Tampa Bay Rays. The ball went foul, and Utley hit a two-run bomb off Scott Kazmir later in the at-bat. Regardless of his history, though, Utley thinks more hitters should use the tactic against shifts.

“One, it’s not that easy,” Utley said. “But over the course of the year, I think guys should try [bunting against a shift] whether it works out or not. They still get the defense thinking a little bit.”

Bunt, homer, or however, Chase Utley just wants to get on enough to put that disastrous start to the season as far in the rearview mirror as possible. So far, so good on that front.

Maikel Franco killed a baseball. That much is apparent. As Ryne Sandberg said after the game, “he definitely got all of that.” He might've even paid Harry Kalas’ statue a visit with that titanic shot off a Jumbo Diaz slider.

I wrote about Franco’s struggles after Sunday’s game and tried to sort of put a positive spin on them, so excuse me for not being too upset about the 22-year-old third baseman reaching base four times (two errors by Todd Frazier although one wasn’t an easy play, double, said homer). After the game, Franco reminded everybody that like he said two days ago, the process remains the same.

On a lighter note, Franco was asked if that was the farthest ball he’s hit in the majors, his eyes lit up and a smile went across his face. “I mean yeah, I think,” he said. “That was really good today.”

After a couple of perfect days for baseball over the weekend, we were treated to an absolutely miserable night. It was so cold, windy, and damp that it felt like we were back in April. A couple of hours before the game, I was pretty skeptical about the prospect of getting this one in.

I’ll take off the curmudgeon hat for a second and cease with the bitching and complaining, because there was some humor to be taken from the bad weather. Reds third baseman Todd Frazier did a pretty lengthy interview with MLB Network (not sure which show) on the field and got soaked. Ryne Sandberg was doing his pre-game chat with reporters in the dugout close by and yelled out to Frazier that it was tough work. I’m pretty sure the umbrella they used didn’t get the job done: 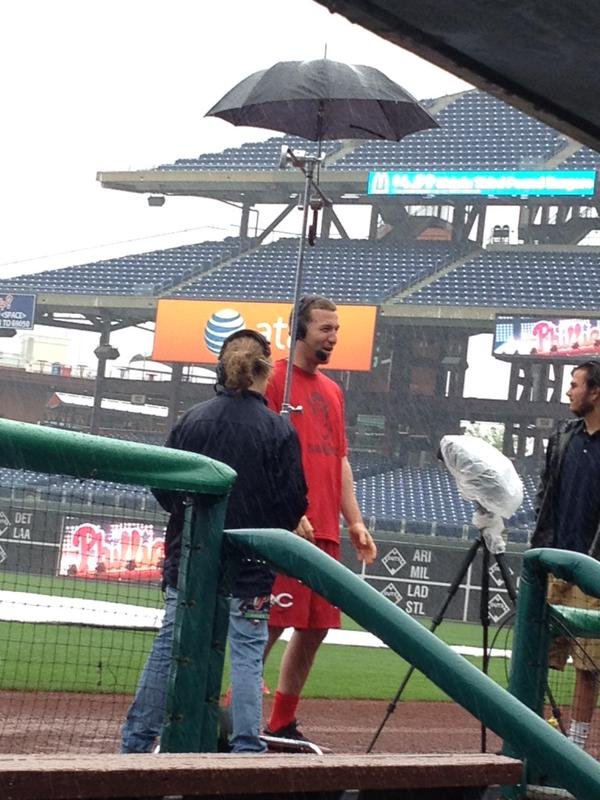 Speaking of Frazier, anyone who remembers his little league heroics knows that he’s from fairly nearby Toms River, New Jersey. Pretty much anyway you slice it, he’s been one of the best players in baseball so far this year (Frazier’s 3.0 WAR is tied for fourth with fellow Jerseyan Mike Trout and Paul Goldschmidt). That got me to do a little research and ask the question if Frazier is the most accomplished MLB player that also participated in the LLWS.

The short answer is no. Doc Gooden and Gary Sheffield, who are related and played for the same Tampa little league, probably hold that title. Still, it’s pretty impressive that Frazier wasn’t just one of those kids who was bigger than everyone at 12 years old and fell back to the pack when everyone caught up in high school.

Sorry, Cole and Ruben. When you read pretty much any article with Hamels trade speculation, Reds starter Johnny Cueto is one of the first names that come up as an alternative in the trade market or via free agency next year. Cueto was scratched from his last start with a sore elbow, but he looked good in throwing six innings and only allowing one earned run. On the season, his ERA is down to 2.90 with a 0.95 WHIP.

You know what that means. Cole's trade value just took a hit tonight, because that's totally how this works:

Jonathan Papelbon had great stuff in throwing a 1-2-3 ninth inning, so much so apparently that he felt confident grabbing a bat and heading out to the on-deck circle when his spot in the order came up. To the surprise of perhaps nobody but Papelbon, Darin Ruf eventually pinch-hit for him. Ruf would go on to walk it off:

Here’s what Sandberg said of Papelbon: “He snuck out there, but not to convince me … I was still thinking of my choices at that time. He bides me a little time.”

Here’s what Ruf had to say of his goofy teammate: “He said, ‘You’re lucky you’re getting to pinch-hit for me.’ He’s a great hitter, so I had some big shoes to fill.”