Phillies prospect watch: Which players have the best trade value? Are untouchable? 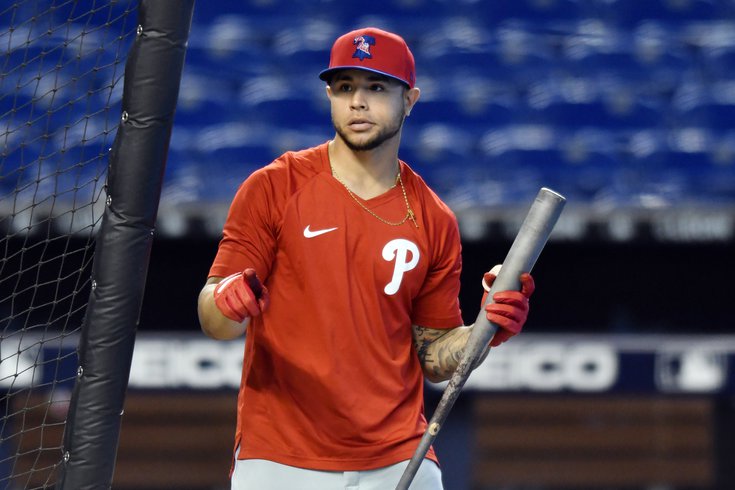 Could the Phillies cash in on catching prospect Rafael Marchan?

It's possible that this is the most you've read about, or cared about Phillies prospects in quite a while.

It's possible, if the Phillies continue to hang on in the NL East, that Painter and other newly drafted players become the replacements for some of the team's current prospects, as the team could be a buyer ahead of the trade deadline in two weeks.

Just which prospects the team parts with in a theoretical deal obviously depends on who they are trying to acquire. Netting a Kris Bryant-type MVP level talent would cost a bit more than someone like Byron Buxton. But it's possible teams will want one of the Phillies top prospects in a deal this month.

With way too many prospects to look at in the farm system as a whole, we thought it might be useful to focus on the current status of the top 10 — according to MLB.com.

Here's a look at how the team's top rated youngsters are performing, ahead of the trade deadline, and of September call-ups:

Abel was last year's first round pick and he's playing like it, boasting eight scoreless innings over his last two starts. His ERA, which ballooned when he struggled early for the Threshers, is now a respectable 3.92. He is likely in the untouchable category.

Stott was the Phils first draft pick two drafts ago, and he's the team's top offensive player right now in the system. He will probably be coveted as Abel will be, and he's been solid in Double-A, hitting .248 since being called up from Single-A. Across the two levels of competition, Stott has walked 39 times in 57 games and has an OBP of .378. He plays a premium position and a position of need and it would probably take a lot for Philly to part with the 23 year old.

Morales continues to struggle in Double-A, with an ugly 2-7 record and 6.84 ERA. Could he benefit from a change of scenery? At 21, the Phillies likely still believe in his ability to turn it around — but perhaps another club would too.

We've arrived at perhaps the most intriguing prospect on the Phils' ledge with regard to trade value. With J.T. Realmuto tied up for years to come, the Phils have the catcher's spot blocked pretty succinctly. They also happen to have three other backstops — Rodolpho Duran (No. 17), Rickardo Perez (No. 19) and Logan O'Hoppe (No. 24) — ranked in the top 25 in their farm system. Marchan is an extremely talented defensive catcher who's hit .346 in limited MLB opportunities (11 games). His lot in life with Philly would be as a back up catcher. There are no doubt plenty of other clubs lacking the strength at the catcher spot in the farm system, and he may wind up being the key piece of a blockbuster deal this July.

Garcia is coming off a monster game back on Friday, blasting two home runs and adding a double and four total RBI in a recent win over Dunedin. At 20-year-old and in Single-A, Garcia is likely to be kept out of trade talks and could find a promotion to Reading if he can hit a bit more consistently.

Martin, 22, is struggling with the bat in Single-A — he has a .114 average and just one hit in his last 17 at bats. He's old enough to be risking bust status.

Rojas is a very young outfielder who has hit worse in each of three seasons at different levels in the Phillies farm system. He is currently mired in a .235 slump with the Threshers.

A fourth round pick in 2019, Miller is one of many prospects who suffered from a lack of minor league season in 2020. At 23, the lefty is trying to round into form and has yet to allow an earned run in three starts this summer.

He was supposed to be the leadoff man in Double-A but he's had some Visa issues and has yet to suit up in 2021.

Put Medina in the category of frustrating talent, like Mickey Moniak, who has not lived up to minor league hype. Once the team's top pitching prospect, Medina has a 5.73 ERA this season in Triple-A. He was shut down due to an undisclosed injury on July 2 after allowing five runs in his last start.