Phillies notes: As trade deadline approaches, Hamels off his game

It feels strange to kinda, sorta eulogize something that isn’t necessarily over, but the Phillies aren’t exactly providing many other rich storylines, are they?

On a sweltering Sunday afternoon in South Philadelphia, Cole Hamels might have pitched his last game as a Phillie at Citizens Bank Park, the only home he has ever known as a professional baseball player. His next scheduled start at The Bank is on July 31st against the Atlanta Braves (although there are a few off days in between now and then), a couple of hours after the trade deadline. By then, we’ll know Hamels’ fate for the rest of the season.

If this was Hamels’ final home start, it certainly wasn’t representative of the excellent 900-plus innings he has thrown at CBP throughout his career. The 31-year-old left-hander was hit hard by a Miami Marlins lineup missing both Giancarlo Stanton and Dee Gordon, surrendering eight hits and five earned runs in three innings of work. It was his shortest outing since April 5th, 2011 against the New York Mets, when he also only recorded nine outs.

“I just wasn’t able to locate pitches early and definitely was getting into counts where I was becoming a little bit too predictable,” Hamels said after the game. “When you’re doing that and laying pitches over the heart of the plate, guys are going to be able to manufacture some hits and honestly get some runs.”

Combined with the disastrous eight-run inning in San Francisco right before the All-Star break, this was the second consecutive game that Hamels got shelled. It’s hard to say whether or not a couple of really bad starts will affect his trade value, but they definitely can’t be viewed as a positive.

The important question is why Hamels has suddenly lost his form. In ten starts from May 8th to June 30th, he owned a 2.73 ERA and was striking out 9.7 batters per 9 innings. This was Hamels at his best. Normally a slow starter, his ERA improves as the season goes along. So while it’s unusual for him to get roughed up to this degree this late in the season, Hamels more or less reacted like this: ¯\_(ツ)_/¯

“I think my track record speaks for itself,” Hamels said. “Sometimes you can get yourself in a rut and got to be able to get out and sometimes you get on a hot streak and can go for months. It’s just [a matter of] being able to start back over and see what I can do from first pitch.”

If that is the case, expect him to bounce back in his next scheduled start on Saturday at Wrigley Field. Still, it’s easy to wonder if Hamels is playing mind games and all of the rumors — After all, he is the biggest fish in the sea at the deadline — are affecting his performance. It would only be natural.

Jeff Francoeur, who played hero by hitting a walk-off homer to give the Phillies the rare win and extremely rare three-game sweep, brought up a pretty good point after the game: One of the benefits of such a great career is that Hamels has never been traded before, and the unfamiliarity of the situation could be weighing on him. As someone who has been traded twice, Francoeur would know.

“It’s tough, man,” Francoeur said. “When you’ve been in one place your whole [professional] life and have never gone through it before, it’s tough. You hear your name every day. I think you’ll see him be just fine whether he goes or [not]. I’m never worried about Cole.”

Hamels’ struggles could have also been at least partially due to extremely warm temperatures. Marlins starter Dan Haren, who is enjoying a successful season so far, also got hit around pretty good by a bad lineup. If the heat did play a factor, neither Hamels nor manager Pete Mackanin was making any excuses. To them, the explanation was far simpler: Hamels just didn’t pitch well.

Gently, Mackanin has publicly wondered a few times about where his ace’s head is at. After the poor start in San Francisco, he admitted that he thought some of the chatter was getting to Hamels. On Saturday, before Hamels submitted another poor start, Mackanin downplayed those previous remarks a little bit.

“When I made that comment, I had talked to him,” Mackanin said. “I think it’s only natural for anybody to be aware of the situation and I didn’t want to blow it out of proportion that that’s why he got hit in San Francisco or anything like that. It’s just that it’s got to affect you mentally and you have to put that somewhere in the back of your mind.”

Whether or not Cole Hamels is in a funk because he’s unsure of his status, declining as a player, or any other explanation, we may never know. According to him, there is nothing physically wrong. If this was indeed the end of his time Philadelphia, it was a rough ending to one great ride.

For the second time this week, Francoeur hit a big homer late in the game and got the opportunity to hold court in front of his locker afterward. He’s pretty good at it, too. First, here is video of the blast off A.J. Ramos, which Francoeur said he knew was gone off the bat with a big, fat smile on his face.

Mackanin said after the game that Frenchy, who “has been bugging him about playing,” would likely be in the lineup on Monday against the Tampa Bay Rays and lefty Matt Moore. Here was Francoeur’s response to that, with the word “shoot” unfiltered. You never know, this could become the new version of Shane Victorino’s “No questions asked.”

“Shoot, I know he’s got a lot of players on this team that got to play and different things,” Francoeur said. “Shoot, everybody wants a chance to play and obviously with a lefty tomorrow [I’ll be in the lineup]. I think Pete does a great job getting myself two at-bats today and with playing tomorrow. In the National League as a bench player, you’re going to get a good opportunity.”

One more Francoeur gem: "We probably have the best record in baseball in the second half." Without checking, I imagine he's correct about that. 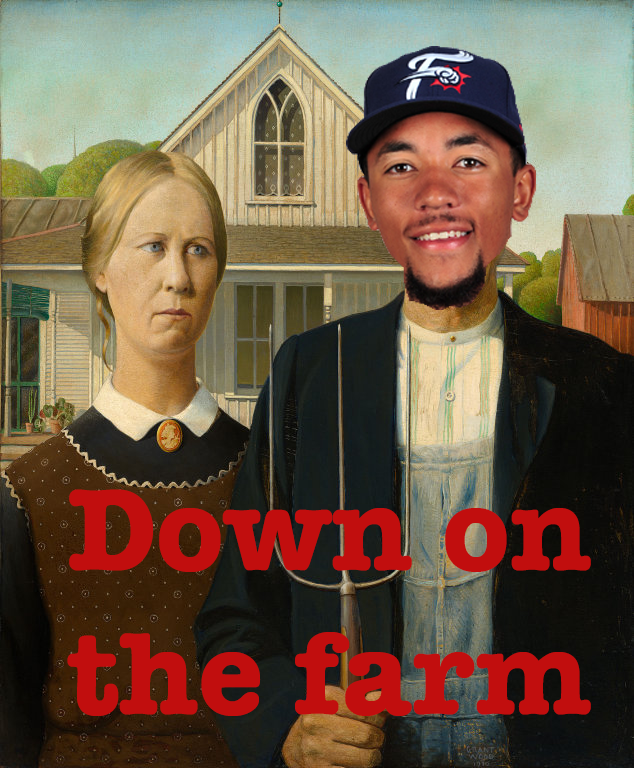 READING 6, New Britain 5: Cam Perkins smacked a walk-off RBI double in the 10th inning as the Fightin Phils (51-43) picked up an extra-inning win. J.P. Crawford homered, Kelly Dugan collected two hits, and Ben Lively gave up two runs in 6.1 innings. It seemed like a productive day down in Double-A, as Reading moved into a tie with Trenton for first place in the Eastern League's Eastern Division.