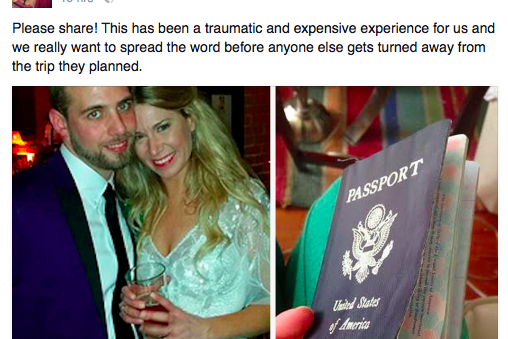 Philadelphia newlyweds Carly Baker and Chris Fee were about to embark on their “dream” honeymoon to Europe from Philadelphia International Airport via U.S. Airways when an airline representative told them Baker’s passport was too “damaged” to fly.

Philadelphia newlyweds Carly Baker and Chris Fee were about to embark on their “dream” honeymoon to Europe from Philadelphia International Airport via U.S. Airways when an airline representative told them Baker’s passport was too “damaged” to fly.

According to the newlyweds' accounts and photos of the document posted on Baker's Facebook page, and a subsequent article by BuzzFeed, Baker's passport was, in fact, fraying a bit around the binding and the cover was a little bent, but the document was not otherwise compromised.

"I thought they were kidding - we caught the (U.S. Airways employee) at the end of her shift bc she pulled us from the flight and banned my passport then literally walked out of the building," Baker posted on Facebook.

Because of the snafu, Baker and Fee were forced to postpone their trip. They will eventually make it to Europe but decided to share their story to help others from falling into a similar situation.

"This has been a traumatic and expensive experience for us and we really want to spread the word before anyone else gets turned away from the trip they planned," Baker posted on Facebook.

In a review of the airline that she posted on Facebook, Baker wrote:

"I'm supposed to be in Greece, on my honeymoon right now. I'm not. We've saved for 2 years, researched, booked, packed and paid for the best trip of our lives.

I'm not in Greece, or even outside my home city of Philadelphia right now because a random manager at USAir decided to deem my passport "DAMAGED" and therefore invalid, referencing frayed strings along the edges of said passport.

Said manager joined us a few minutes later only to loudly instruct the gate agent to immediately pull us from our current flight 2 hours later, as well as to make a formal note in my travel file that my passport had been flagged as damaged and not to be used for any travel."

According to BuzzFeed, the U.S. Department of State does restrict traveling with passports that have been “significantly damaged,” but that determination is made largely on a case-by-case basis.