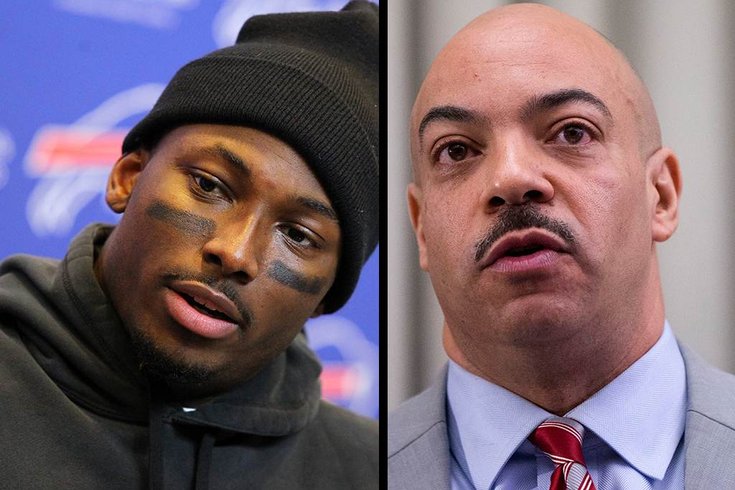 Former Philadelphia Eagles running back LeSean McCoy, left, will not face charges for his involvement in a Feb. 7 nightclub brawl in Old City that injured two off-duty Philadelphia police officers. The state attorney general's office said it will not overturn the decision by Philadelphia District Attorney Seth Williams, right, not to prosecute McCoy.

LeSean “Shady” McCoy has officially beaten the rap for a Feb. 7 bar fight at the Recess Lounge that resulted in two off-duty police officers being seriously injured.

The state attorney general’s office has formally notified John McNesby, president of the Fraternal Order of Police in Philadelphia, that it will not overturn a decision by District Attorney Seth Williams not to prosecute the former Eagles star running back.

On April 4, after taking nine weeks to investigate a 10-minute bar fight in Old City, the district attorney announced that he would not prosecute McCoy because of “insufficient evidence.”

“The key phrase is ‘abuse of discretion,’” Bruce L. Castor, the state solicitor general, wrote McNesby on Thursday. “Whether the Attorney General agrees or disagrees with the determination of the district attorney is not the issue. I would have to not only disagree with the decision of DA Williams, but I would have to conclude that his decision was so far off the mark as to be abusing the authority given him by the voters of Philadelphia.”

“Applying that standard, I cannot say that I find DA Williams abused his discretion,” Castor wrote McNesby. “In his shoes, might I have decided the matter differently? Perhaps. But any disagreement we might have falls within the margin of where reasonable prosecutors might differ.”

At his May press conference, Williams. stated that one of the off-duty officers at the Recess Lounge was the aggressor. Officer Roland Butler, the district attorney said, grabbed one of Shady’s companions, former Pitt running back Tamarcus Porter, by the collar, and then by the throat. Both men wound up on the ground where witnesses saw Butler on top of Porter, Williams told reporters. At 6-foot-4 and at least 250 pounds, Butler had a decided advantage over the 6-foot-1, 195-pound Porter.

When bouncers threw Butler out of the Recess Lounge, along with Porter and Officer Darnell Jessie, another off-duty cop, the district attorney said, two on-duty Philadelphia police officers were standing outside the club. And they saw that Butler was "the person being the most aggressive,” Williams said.

Witnesses told investigators that the incident began when Butler allegedly swiped a $350 bottle of pink champagne off McCoy's table.

There were other problems with the case that prevented the district attorney from prosecuting anybody. No two witnesses could agree on what happened, he said. And the two officers didn’t follow police procedures such as calling 911 after the fight, the department's policy when they're involved in an off-duty incident.

Instead, Butler left the scene and sought treatment at Delaware County Memorial Hospital in Upper Darby for a laceration to his right eye, a broken nose, broken ribs and a sprained thumb.

The other off-duty officer injured in the brawl, Jessie, was admitted to Hahnemann University Hospital, where he received eight stitches over his left eye and treatment for a possible skull fracture.

In an April 4 letter to the attorney general’s office, McNesby described the district attorney's decision not to prosecute as "an outrageous cover-up and dereliction of duty by a public official." McNesby stated in his letter that the only reason Williams let McCoy off the hook was "because McCoy is a prominent professional athlete."

In response, Castor wrote McNesby that “at the direction of Attorney General [Kathleen] Kane, I personally oversaw the review along with former Abington Township Police sergeant and detective Michael Miletto, now an agent with the OAG.”

“Agent Miletto and I looked at all available witness statements and video of the incident, examined all police reports, hospital records, photographs, in addition to conducting some interviews ourselves,” Castor wrote. “We met with members of the Philadelphia Police Department, Philadelphia District Attorney’s Office, and representatives of the potential suspects. I am comfortable that we have seen enough evidence to come to a decision on whether to overturn the decision of the Philadelphia District Attorney not to authorize the filing of criminal charges.”

In February, McNesby and Philadelphia Mayor Jim Kenney, after seeing a 30-second cellphone video posted on TMZ Sports, had called for the arrest of McCoy. In the video, the officials alleged, McCoy was seen throwing a punch. His lawyer, however, said that if McCoy threw a punch, he whiffed, and that the only thing he was trying to do was to pull Butler off of his friend, whom Butler had pinned on the ground by the neck.

The stakes were high for McCoy. Had he been suspended from the NFL for even one game, he would have risked losing $18 million in guaranteed money in the $40 million contract that he signed last year with the Buffalo Bills, after he was traded from the Eagles.

In a letter Thursday to Williams and Dennis Cogan, McCoy’s lawyer, Castor wrote that the “OAG now considers this matter closed.”

“I’m not the least bit surprised,” Cogan said, “because McCoy did absolutely nothing wrong that night. The most he ever did was try to break up a fight.”

A spokesperson for Williams released the following statement:

"The Philadelphia District Attorney's Office was pleased to learn that the Pennsylvania Attorney General's Office, after their review of the LeSean McCoy case, declined to seek permission to overturn our decision not to prosecute. This was a decision that should be left to locally elected officials, and it is appropriate that the Attorney General will not try to intervene. As always, the District Attorney had no motive in reaching his charging decision other than making the call on the facts of the individual case."