The device can tell you whether the president is in D.C., elsewhere in the country or abroad 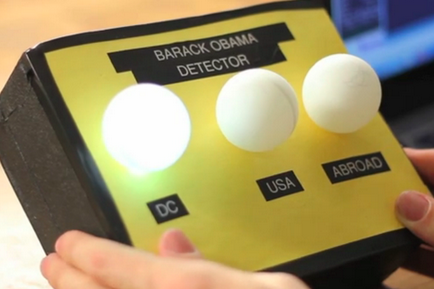 Read More
A Philadelphia native has engineered a device to will tell you the current location of President Barack Obama.
Andrew McGill made his "Barack Obama Detector" — which tells you whether the president is in Washington, D.C., elsewhere in the United States, or abroad — at his job at the National Journal, Philadelphia Magazine reported.
He built the device in about an hour and for less than $100 using an Arduino, a microcontroller device that employs an open-source platform. People have used the Arduino to make auto-lacing shoes, a flame-throwing Jack-o-lantern, a jacket-mounted turn signal for bicyclists, and now a thing that tells you where the leader of the Free World is.
You may be familiar with McGill as the creator of PhillyRapSheet.com, a web site that tells you who's been arrested in Philadelphia every 30 minutes by scanning court documents.
McGill explains his device further here.
Click here for the full story.