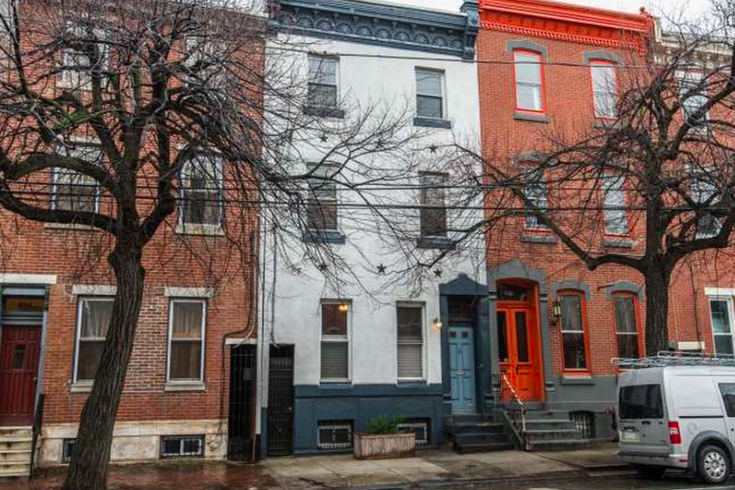 This three-story Victorian townhouse fits in perfectly in the Northern Liberties neighborhood.

Defining the line between gentrification and urban renewal for decades has been one the fiercest debates about urban policy and development in American cities.

In addition to factors of displacement and discriminatory lending, the more subtle and everyday influences of social history have a way of asserting themselves into narratives about neighborhood change, sometimes in ways that can be both counterproductive and inaccurate.

A new analysis of American ZIP codes finds that Philadelphia is home to two of the nation's top 20 neighborhoods impacted by gentrification — Northern Liberties (19123) and Point Breeze (19146).

The report, put together by the Rent Cafe blog, looked at three data points across 11,000 U.S. ZIP codes to determine its rankings, which cover the period from 2000-2016. Data on median home value, median household income and the share of residents with a bachelor's degree or higher were taken from the 2000 Census and the 2016 American Communities Survey.

Final rankings were determined by a simple average of the rankings ZIP codes received in each of the three categories.

"It's really difficult to look at neighborhood change at the ZIP code level," said Emily Dowdell, a Philadelphia-based community and economic development analyst. "It's so vague that it masks a lot of the change within neighborhoods. You really need to be looking at a much smaller, finer geography."

Dowdall oversees business development for policy solutions at Reinvestment Fund, a community development financial institution that aims to improve the quality of life in low-income neighborhoods. She was the author of a 2016 report from the Pew Charitable Trusts that examined multiple facets of long-term neighborhood change in Philadelphia.

"I think it's always important to keep in mind that cities are complex and constantly changing. People move in, they move away, people are born and they die. Gentrification is very real in some places, but it's not the only type of neighborhood change. It's not a uniform process, either. We have to ask, how is it playing out in each neighborhood?"

In the rent cafe report, Northern Liberties—whose long-term transformation has been obvious on and around Second Street—came in at No. 4 in the country. The average home value increased by 203 percent, average household income rose by 95 percent and the number of residents with college degrees or higher rose by 230 percent.

As jarring as the numbers appear, this isn't necessarily a complete picture, Dowdall explained.

"In Northern Liberties, gentrification was getting discussed as early as the 1980's," Dowdall said. "When some of the former industrial parcels were redeveloped, it created an entirely new residential market. But in our analysis, we found that on many of the neighborhood's older residential streets, most of the sales were from one owner to another, not an investor. There's less price appreciation when owners sell to owners."

It's also true that the 19123 ZIP code extends beyond Northern Liberties and west to Broad Street, encompassing a large section of subsidized housing.

In the 2016 Pew report, Dowdall and her colleagues determined that the most glaring example of gentrification in Philadelphia could be found in Graduate Hospital, which lies within the same 19146 ZIP code as Point Breeze.

"Graduate Hospital was very much a renter neighborhood," said Dowdall. "Change in the housing market came very rapidly, so it's always a concern whether people are getting priced out, and if they leave, are they getting what their homes are worth? Are investors not giving residents a fair price for their properties?"

Point Breeze, where housing battles have intensified over the past decade, landed at No. 8 in Rent Cafe's ZIP code rankings. There, average home value increased by a massive 404 percent — second-highest in the country — compared to an average household income change of 51 percent, one of the lower shifts among the top 20 ZIP codes. Residents with a college degree or higher rose by 106 percent.

Both Northern Liberties and Point Breeze were targeted last year by vandals who appeared to be motivated by opposition to gentrification in these neighborhoods.

"When change is more rapid, there's more likely to be tempers flaring around it," Dowdall said. "When we talk about concern and mitigation for gentrification, there has to be an understanding of whether the neighborhood is a renter or owner market. In lots of places, problems are driven by the housing market, income differences or racial and ethnic change, but the cultural side is often where residents feel it most. That's a lot harder to address."

In Philadelphia, Dowdall said, the vast majority of gentrification is propelled by one powerful influence.

"Proximity to Center City is really what's been driving gentrification in Philadelphia," Dowdall said. "Otherwise, these neighborhoods are all very different from one another in important ways."

Notably, 12 of the top 20 most gentrified ZIP codes in the US are in East Coast cities, including seven in New York City alone, according to the Rent Cafe report.