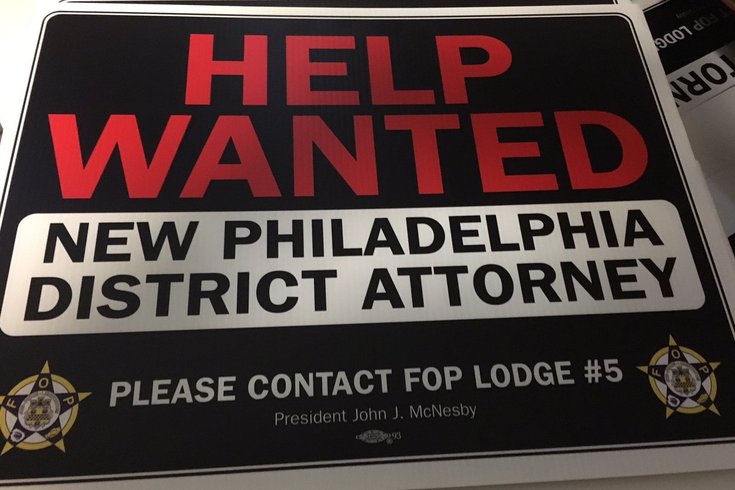 An ongoing spat between Philadelphia's district attorney and police union shows no signs of stopping. In fact, new signs are being posted around the city to prove it.

The Fraternal Order of Police Lodge 5 made clear on Wednesday its thoughts on Seth Williams, the city's embattled top prosecutor, by sharing a message calling for his ouster.

The labor union posted a help wanted sign on Twitter and a billboard on Interstate 95 urging for a new district attorney.

According to CBS3, the sign is located between Bridge Street and Cottman Avenue, facing northbound traffic.

The billboard is the latest example of FOP Lodge 5 President John McNesby's displeasure with Williams, who is seeking reelection this year after serving in the office since 2010.

On Jan. 4, McNesby called Williams an "ethically challenged sideline playboy" for not pursuing charges against a 16-year-old girl who admitted to punching a police officer in Southwest Philly.

In November, Williams and McNesby sparred over legislation on how police-involved shootings should be handled. Williams unveiled a plan to promote more transparency while McNesby backed a state bill that would protect the identities of officers in such cases. Gov. Tom Wolf eventually vetoed the bill.

The pair also clashed last spring when Williams declined to charge former Philadelphia Eagles running back LeSean McCoy for his involvement in a February brawl that injured two off-duty officers.

Earlier this week, Williams was hit with the largest fine ever levied in the 10-year history of the city's ethics board. He's been ordered to pay $62,000 in penalties for failing to disclose gifts and sources of income over a five-year period.