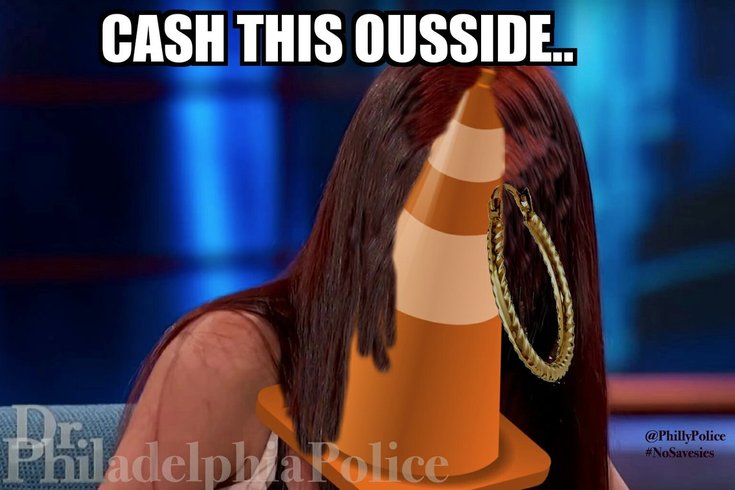 A winter storm could drop as much as 10 inches of snow in Philadelphia on Thursday, allowing local law enforcement a chance to continue a newly-beloved tradition.

Every time snow is in the projected forecast, the Philadelphia Police Department picks out a pop culture reference to warn residents against using objects to save parking spots after shoveling. Usually, Philadelphians prefer to throw a chair or a cone out on the freshly-shoveled asphalt, but some residents get more creative.

The public service announcement, which authorities have dubbed #NoSavesies, serves as a reminder that parking spots can not be saved and to alert the police when neighbors try to do so. The department urges the public not to practice vigilante justice and allow an officer to handle the situation.

This storm, the PPD used the now-infamous "Cash Me Ousside" girl:

For the uninitiated, 13-year-old Danielle Peskowitz Bregoli appeared on "Dr. Phil" in September 2016 so her mother could receive some guidance from the television psychologist on her our-of-control behavior. Bregoli took issue with reactions from members of the studio audience so she called them derogatory names. After some prodding by Dr. Phil, Bregoli eventually uttered a phrase that would forever enshrine her in internet fame, "Cash me ousside, howbow dah?"

The clip has become so popular that countless jokes and parodies were spawned, including a new ad campaign for a Philly-based company.

Unfortunately, Bregoli was caught on video during a flight this week fighting a fellow passenger. That did not stop the PPD from using Bregoli as its muse and plastering an orange cone over her face:

Bregoli joined Drake and Game of Thrones as topics for the #NoSavesies campaign, now in its third year.

Police officials say offenders could receive a $115 fine for "obstructing the highway" but would rather remove the objects themselves without further incidents.