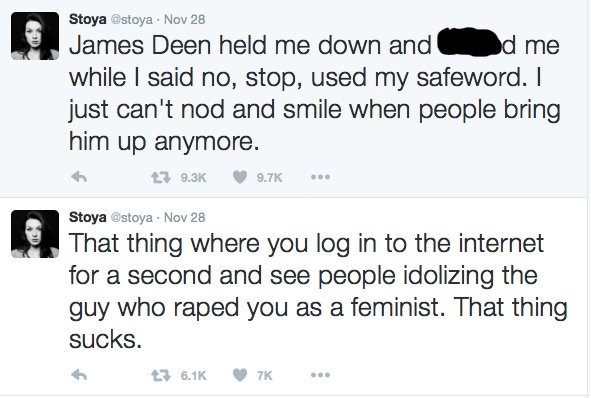 The Inquirer reports that Stoya has not yet filed charges.

Deen, who in addition to performing in adult films starred in the 2013 movie The Canyons alongside actress Lindsay Lohan, has denied the claims.

He called them "egregious" Sunday on Twitter, saying that he respects women.

I want to assure my friends, fans and colleagues that these allegations are both false and defamatory

In light of the claims, the women's website The Frisky has stopped publishing a sex advice column written by Deen, the Huffington Post reports.

An article on the website written by editor Amelia McDonell-Parry said while she liked working with Deen and she understands accusations aren't necessarily a conviction, in cases like these oftentimes the victim's story is the only evidence. More from McDonell-Parry:

From a professional standpoint, as the editor of a women’s blog which has published the accused’s words, acting swiftly and decisively is the least that I can do. The court of public opinion is not a court of law, and I don’t need Stoya or any woman to “prove” that she has been raped for me to believe her. Women who come out as rape victims are far, far, far too often not believed.

The hashtag #solidaritywithstoya has gained traction on social media, with several posting their support for the actress.

The courage it takes to come forward with personal details of sexual assault or rape is ENORMOUS. #solidaritywithstoya

No means no. No matter what job you do. No matter if he's your partner. No matter how many times you've said yes. #solidaritywithstoya

Stoya hasn't posted anything else since making the accusations and couldn't be reached for comment, according to the Post.