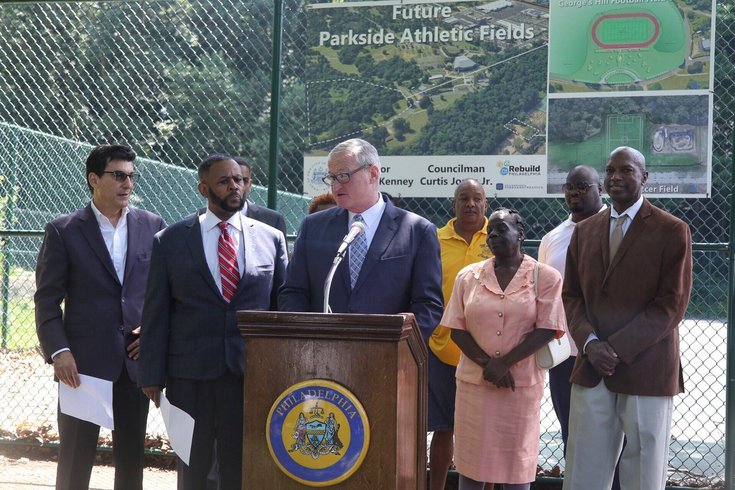 City officials announced on Wednesday, June 20, 2018, that the Rebuild project will bring a soccer and football practice field to Parkside.

Despite Philadelphia’s soda tax still being at the center of legal and political battles, the city is moving ahead with some of its Rebuild program to revitalize parks, rec center and libraries.

On Wednesday, that meant announcing that the Parkside Fields near the Mann Music Center will soon get a boost, but the project comes with a funding caveat.

Later this year, using some of $8 million in capital-budget funding, work will start on converting “a grassy area near the Parkside Evans Playground on Parkside Avenue into a public practice field for many of the neighborhood sports teams.” It will be called the Parkside Athletic Fields.

In a city faced with limited fields for youth-soccer and other sports programs, that first phase of the project will create a soccer and practice football field for schools in the area.

“Our kids should have the same quality facilities as the teams they compete against and have the opportunity to play in their own community. They deserve a place they are proud of.”

The park is located in the district of City Councilman Curtis Jones, who likened it to a “field of dreams” and spoke about youth sports as a vehicle for teens to find a positive path toward their futures.

"There's six high schools within a mile and a half of here that will be able to use this practice field and the upper field for game day that they can be proud of," he said. "They won't have to go to a suburb to see how the other half lives. They can see it right here."

The second phase of the project will be used to renovate a second field that can be used for soccer and football games.

Work on that “will begin after the majority of Rebuild’s funding becomes available through bond proceeds that will be repaid by the Philadelphia Beverage Tax.” Those bonds won’t be issued until the state Supreme Court weighs in on the soda-tax issue.