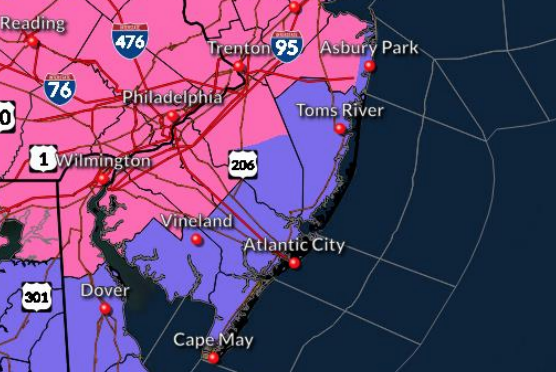 Snow and sleet are forecasted to fall across the Philly region from Thursday morning through Friday afternoon.

As much as 9 inches of snow and sleet is expected to accumulate throughout the Philadelphia region on Thursday, according to the National Weather Service.

Philadelphia declared a snow emergency that took effect at 6 a.m. Thursday, and in New Jersey there is a winter storm weather alert is in effect until 10 a.m. Friday. All New Jersey state offices are closed.

The storm will continue into Friday afternoon, though most precipitation will fall Thursday.

In Philadelphia, sanitation crews have been deployed to clear streets until conditions are deemed safe for travel. Pennsylvania officials urged residents to stay home until the storm has passed, but those who need to travel are advised to allow additional time to account for delays.

"We know that this storm will make travel difficult, and I encourage anyone who doesn’t need to be out on the roads to stay home," Wolf said. "PEMA, PennDOT, the PA Turnpike and the State Police will be monitoring conditions across the state to ensure that commonwealth assistance can be delivered quickly when needed."

All SEPTA service is expected to operate on a normal schedule Thursday, but riders should anticipate travel delays due to the weather.

Any cars parked along snow emergency routes in Philadelphia will be subjected to ticketing and towing.

The Philadelphia Parking Authority is offering a 24-hour, $5 rate for residents to park their cars at several Center City garages until the snow emergency expires. To receive the discounted rate, drivers must bring their parking stub and pay at the PPA office in each garage.

Below are the participating Center City garages:

Trash and recycling collection has been suspended for Thursday.

Wednesday's pickups, which were already pushed back due to Presidents Day, will now take place Friday. Thursday's collections are postponed until Saturday. Philadelphia residents who have trash and recycling pick up on Fridays will not have their garbage collected this week. Residents with rear-driveway collections should expect delays caused by the snow.

The city's sanitation centers are closed on Thursday, but will reopen Friday with normal operating hours.

A code blue issued by the city remains in effect until further notice. Residents who are experiencing homelessness may remain indoors at a shelter until the code blue expires. Identification is not required to enter a homeless shelter while a code blue is in effect.

All School District of Philadelphia buildings are closed. The school district will continue its online instruction.

Archdiocese of Philadelphia high schools and parochial elementary schools will conduct online-only learning. Secondary schools will be on a flexible, all-virtual instruction day.

The city's access centers and meal and food distribution sites also are closed.

Most city-run COVID-19 testing sites in Philadelphia will remain open, but a mobile testing unit event at Beloved St. John Evangelistic Church in North Philly has been called off.

All vaccine clinics run by the Department of Public Health are closed. People will need to reschedule their appointments.

In New Jersey The COVID-19 vaccination mega-site in Burlington County is closed due to the snow, Gov. Phil Murphy said. All vaccine appointments scheduled for Thursday at the Moorestown Mall have been reschedule to Friday.

The COVID-19 vaccination mega-sites in Gloucester and Atlantic counties will remain open amid the storm, and New Jersey's vaccine call center will also continue operations.

The New Jersey Department of Transportation is urging residents to stay off the roads and remain at home for the duration of the storm. NJ Transit is expected to operate on a normal service schedule, but riders should expect delays due to the weather.

The National Weather Service has issued a winter storm warning for the Philly region that remains in effect until 10 a.m. Friday, as heavy mixed precipitation is expected over the next two days.

As much as 9 inches of snow and sleet is expected to accumulate in parts of region, with the vast majority falling during the day Thursday. There is also a slight chance of ice accumulation.

Below is a forecast for NWS Philadelphia. To get forecasts for other areas, visit the NWS forecast page and enter a specific location:

THURSDAY: Snow is expected before 10 a.m., then becoming sleet and freezing rain. Total snow and sleet accumulations expected to be 3-9 inches. High temperature near 30 degrees. Sleet will continue Thursday night, possibly mixing with a freezing drizzle. Nighttime low of 28.

FRIDAY: Sleet to continue until 8 a.m. then transitioning to a light, wintry mix of snow and sleet until 11 a.m. Chance of daytime precipitation is 70%. The skies will be cloudy with a high temperature near 35. Overnight, mostly cloudy skies with a low near 23.

SATURDAY: Mostly sunny and breezy. High near 33; overnight low around 17

SUNDAY: Sunny, high temperature near 36 and overnight low around 25.