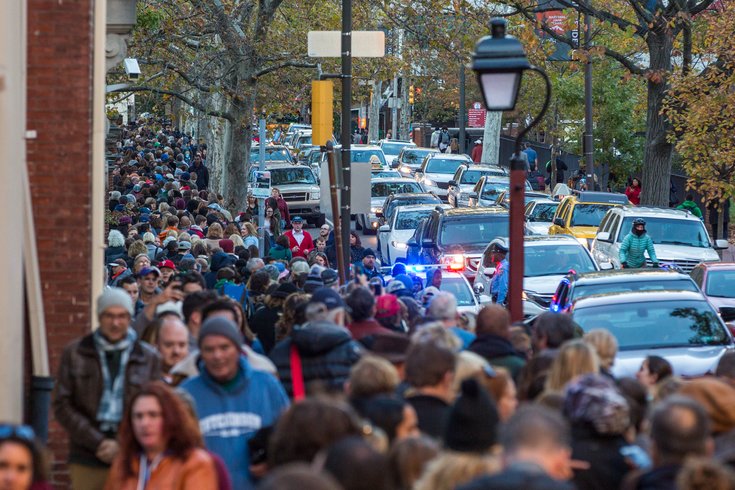 It was a momentous night in Philadelphia, where Democratic presidential candidate Hillary Clinton appeared for final campaign rally ahead of Tuesday's election.

Droves of people lined up to make their way to Independence Mall for the event, which featured appearances by Barack and Michelle Obama, Bill and Chelsea Clinton and musical guests Bruce Springsteen and Jon Bon Jovi.

The trek to Philadelphia's historic heart inspired lots of attendees to post scenes from the civic walk on Twitter. Here's some of the best and most amusing.

Line for @HillaryClinton rally tonight in #Philadelphia stretching more than a mile from #IndependenceHall #imwithher pic.twitter.com/On60PNKbo5

The line for the Clinton rally stretches from Market down past South Street. #philly #philadelphia

Amazing atmosphere in the line waiting to go into the @HillaryClinton rally in Philadelphia #obama #clinton #ImWithHer pic.twitter.com/vzcrrSxHLQ

The line for Clinton in Philly is insane. Longest line I've seen this election (including Trump rallies) pic.twitter.com/HHVGCaP9wq

30m ago, line for Hillary Clinton ended at Washington Ave. & 4th street in Philly. That's 1.3 miles away from rally. It's even longer now. pic.twitter.com/7PAcSVa1iK

We're at Independence Mall in Philly for Hillary Clinton's rally tonight. 3+ hours before it starts and the line is over 3 city blocks long pic.twitter.com/m4bcarjPHM

Hillary Clinton's final set piece: A rally in Philadelphia with the Obamas and Bruce Springsteen https://t.co/rtbvTpBL7P

There is a staggering number of people lined up for tonight's @springsteen rally for @HillaryClinton in Philadelphia #appelections pic.twitter.com/swGTxXuN8K

Just walked miles to find the end of the line to Hillary's rally tonight in Philadelphia. My feet may hurt but my heart is full #imwithher

To all those who stood on their feet, you did it because it's potentially historic. Remember Washington, D.C., and Chicago when Obama was elected and inaugurated? Mind over matter.