In Philly suburbs, secret Trump supporters not so eager to come out of the closet

'Trump is a pig, but I can’t vote for Hillary Clinton,' says a Montgomery County voter 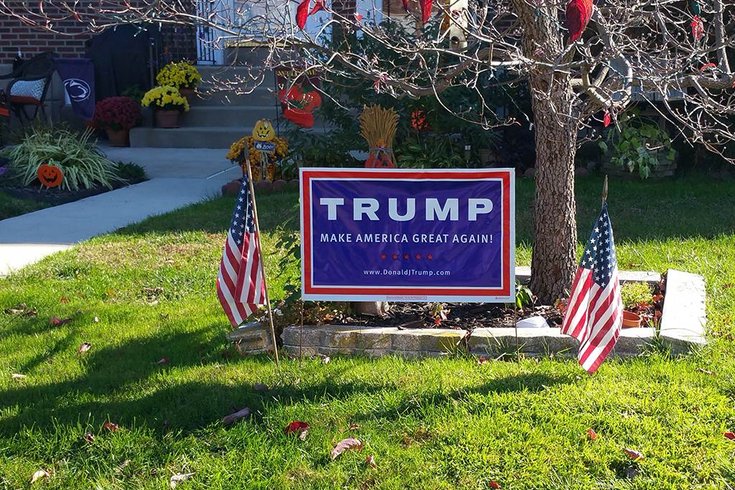 A Donald Trump campaign sign sits on the lawn of a Delaware County home.

The long-time Delaware County resident is a college-educated professional in his mid-40s. He has two daughters and a son, and his wife is also college educated. They live in a nice single Colonial with a side garage and a good amount of surrounding ground.

Each weekday morning Tom stops halfway down his sloped black-asphalt driveway before he leaves for work, hops out of his car, goes back into his garage to pull out his Donald Trump election sign, then quickly hammers it into his front lawn. Each evening he arrives home from work, he unearths the sign and stores it back into the garage.

“My neighbors know who I like, and my family and close friends do, but I’m not that crazy about anyone at work or any business associates to know I like Trump,” admits Tom, the antithesis of a typical Trump supporter – white male without a college degree. Tom agreed to speak to PhillyVoice under the condition that his identity be withheld.

“I just don’t need the aggravation," he said. "I don’t need anyone looking at me as a racist, sexist or bigot because I like Trump.”

Tom is not alone.

In fact, silent faction of voters out there will vote Tuesday for Trump, the controversial, polarizing Republican nominee for president. In Pennsylvania, that number of secret Trump supporters is in the thousands, maybe tens of thousands, but they are out there, across the country.

Pennsylvania is a key state in the election. It’s viewed as a battleground state, said to be leaning for Democratic nominee Hillary Clinton, a firewall to stave off Trump’s late charge in the polls.

A Morning Call/Muhlenberg College poll out Saturday shows Democrat Hillary Clinton with a six-point lead among likely Pennsylvania voters. The statewide survey — conducted between Oct. 30 and Nov. 4 with 405 likely Pennsylvania voters and with a margin of error of 5.5 percentage points — shows Clinton with support from 48 percent and Trump with the backing of 42 percent in a head-to-head matchup.

PhillyVoice spoke to nearly three dozen closet Trump supporters from the Chester, Delaware and Montgomery counties. Nineteen were men; 16 were women. Thirty of them had college degrees. Four were African-American.

The share one thing in common: they're voting for Trump and fear they will be branded negatively because of it.

John, who lives in Montgomery County, posts pro-Trump rhetoric on his Facebook page and has a Trump bumper sticker on his car. Like Tom, John puts his Trump sign out on his lawn each day, and takes it back in when he returns home from work. He asked to speak anonymously because he’s a professional and has a government job in the public service industry.

"Trump has his flaws. He’s no prize, but she’s a national security threat. That’s the way I look at it." – John, a suburban Trump supporter

“I bring it in every night to avoid damage,” John says, of the campaign sign. “I have my family members that are too afraid to admit that they’re voting for Trump. They’re afraid that to say they want a change in this country, and don’t want to be labeled racist, or sexist. Basically, all of the things that Trump is called by his detractors. You can call it guilt by association.

John sees Trump as the lesser of two evils.

“As bad as Trump is, he doesn’t come anywhere near the amount of criminal activity that Hillary Clinton is involved with. Trump is a pig, but I can’t vote for Hillary Clinton," he said. "I’m from a law enforcement family and my mother won’t answer a poll or respond to anything publicly about Trump. Trump has his flaws. He’s no prize, but she’s a national security threat. That’s the way I look at it.

"Clinton may be elected, and she’ll probably win, but it may be another Richard Nixon thing," he added. "She won’t have a long presidency, because she’ll be found guilty of something and impeached.”

'THESE PEOPLE ARE MISOGYNISTS'

Professor Robin Kolodny, who heads the political science department at Temple University as a 26-year faculty member. She says this presidential election is unlike any other in American history.

“It’s crazy and highly unusual because of the nominee of the Republican party,” said Kolodny, who’s worked with both parties. “Times have changed, but we’ve never had a (presidential) candidate from a major party that had zero political experience. That’s never happened. Ron Reagan came from the entertainment world, but he was governor or California before he became president.

"It’s unusual to go straight to the front of the line like Trump has," she said. "The learning curve for a new president is really steep. Some of the things he says, like how he’s going to unilaterally get out of international treaties and he’s going to commit war crimes, an experienced politician knows not to go there.”

Kolodny says a number of people have broached the topic of these “silent Trump supporters.”

“Unfortunately, I have to say, these people are misogynists,” Kolodny said.

She relates a story of being on a train a few months ago talking to a fellow passenger who worked for a medevac company. The man supported Jeb Bush, but when he was knocked out of the Republican race, he changed his affiliation to Trump even though he didn’t like him, because he “couldn’t trust Clinton.” The gentleman brought up Benghazi, and Kolodny countered that it was a Republican president who ordered the invasion of the wrong country for the wrong reason, based on bad intelligence.

“It’s when the light went on – that he just didn’t want a woman to tell him what to do,” Kolodny said. “Men are four times more likely than women to say that they’re going to run for office. When a woman with equivalent experience faces a man in a race, the woman has a better chance of winning. We all have gender stereotypes, and one of those stereotypes is that women are more honest than men when it comes to city council or the mayor of small towns.

“On a national level, a woman has to be perceived as twice as honest as a man to do well. The media keeps harping on the email scandal, while Trump has 18 years of tax evasion. When Sarah Palin was on the ticket, how often did we heard about her children and the focus on her children? They never said that about Barak Obama, who has children of the same age.

"Even women feel the same way, Kolodney added. "A lot of women are themselves resentful of a woman being bossy over them. We’re in a critical generational time. We’re on the cusp of this generational shift where it’s so uncomfortable for many people to see a woman in power.”

In 2008, Kolodny noted, the Obama campaign was concerned with something called “The Bradley Effect,” so-named for the African-American mayor of Los Angeles Tom Bradley. When Bradley ran for governor of California, he polled consistently ahead. He lost to white Republican candidate George Deukmejian, because white voters were giving inaccurate polling responses to hide a perception of prejudice, as the theory goes.

That’s the other dimension, she said. Are people saying that they’re voting for Clinton, but won’t truly vote for Clinton because they would be too embarrassed to say they wouldn’t vote for a woman?

“I think that’s the case,” Kolodny said. “Polls have been confronting that. The response rate of an average poll is three percent. Most people would hang up on a pollster. Do I want my neighbors to know that I’m a sexist, no. Do I want my neighbors to know that I would never take orders from a female boss, no. Why are they saying this? They’re saying this because they’re in a neighborhood that is full of well-educated people who are comfortable with a more diverse society.”

Tom, a 29-year-old resident of Secane, Delaware County, and a Penn State graduate, is in the security field but overqualified and underpaid in his current position. He’s fed up with the system, and like many white males, feels disenfranchised by the Democratic Party.

He’s voting for Trump. Despite the fact his girlfriend is Mexican.

“It’s one of those things where I don’t walk around wearing a Trump hat or put Trump stickers on my car bumper,” said Tom, who asked to withhold his last name. “You’re just in for trouble, I think, if you do.

"You’re instantly labeled a racist if you tell people that you’re voting for Trump, and my girlfriend is Mexican." – Tom, Delco resident and Trump supporter

"People are very emotional over this election. I fear violence could happen if I’m seen wearing Trump stuff," he added. "You can’t put a Trump sign out in fear of having it destroyed. I think it’s very ironic how the Democratic Party is supposed to be the party of inclusion and peace, and they’re the ones vandalizing and attacking anything to do with Trump. It’s why I’m afraid to let people know that I support him."

In his neighborhood and others in Delaware County, Tom said, people have a quick-trigger response toward pro-Trump people.

"You’re instantly labeled a racist if you tell people that you’re voting for Trump, and my girlfriend is Mexican. I hear it every night from her that I’m so stupid blah, blah, building the wall, blah, blah, blah.

Tom says there are a lot of people like him, but his generation is overwhelming Democrat.

“It’s hard enough to get by, working 60 hours a week and having college debt of up to $28,000 and working a job where I’m underemployed and overqualified,” he said. “But I’m not going to sit here and collect food stamps, because I feel I didn’t get a fair shot. It’s why I’m voting for Trump. I do believe he can make changes happen.”

'PHENOMENA MAY NOT BE WIDESPREAD'

According to Berwood A. Yost, the director of the Center for Opinion Research at Franklin and Marshall College, the race has tightened in some areas of the country, with Trump gaining an advantage. But it’s not unusual in a campaign cycle as an election nears.

“I think there is certainly a possibility that people are afraid to admit (that they’re voting for Trump),” said Yost, a Penn State undergrad who possesses a graduate degree in political science from Temple, and has been polling in Pennsylvania for 25 years. “I would imagine that could work on both sides, but it’s possibly true. The question is, will that manifest itself in the polling? We have looked at that. People we poll decide how they’re going to be interviewed. Some people will call us, or we’ll call them. Or, we also interview people online, and they don’t have to essentially let us know who they are.”

In comparing responses from online polling to those answered in person, Yost doesn't see a large difference in how their questions are being answered. If there were a seismic sway in Trump support, Yost said, there would be a needle move on the online side of their poll.

"The evidence we do have doesn’t show a hidden Trump vote, but it’s always possible that people are opting not to participate, because they don’t want to talk about who they’re voting for," he noted. "That’s where that hidden Trump vote could exist.”