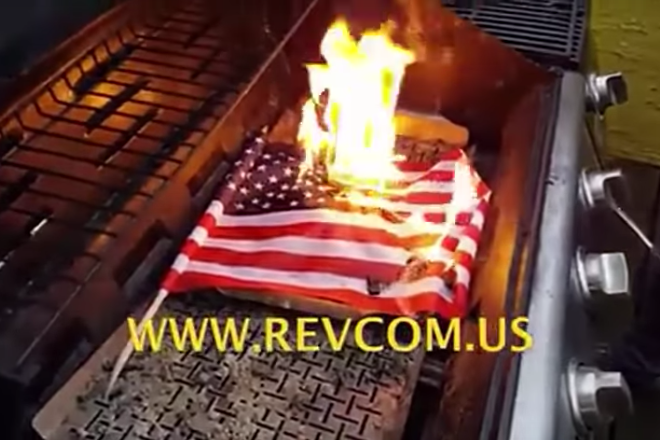 A still from the since-deleted #flagburningchallenge video posted by the Philly Revolution Club.

When a member of the Philly Revolution Club filmed himself burning the American flag as a part of the online campaign called the #flagburningchallenge and then posted the video to Facebook, he knew there would be pushback.

He did it in response to President-elect Donald Trump's tweet on Tuesday that said people who burn flags should face jail time or have their U.S. citizenships revoked.

Steve – not his real name – is a member of a newly-formed club that has joined similar clubs across the United States in protesting Trump's threat criminalize an act the U.S. Supreme Court has ruled is protected as free speech by the U.S. Constitution's First Amendment.

Nobody should be allowed to burn the American flag - if they do, there must be consequences - perhaps loss of citizenship or year in jail!

What Steve didn't expect was that the response to his video would be so personal and threatening.

He hadn't included his own name in the original post on the Philly Revolution Club page, but by Wednesday night Steve began getting private messages via Facebook with photos of him and his wife.

There were dozens of threats – some vague and others eerily specific and threatening to kill Steve. One user wrote "Maybe I'll burn you to death" and included a screenshot showing Steve's home address. Another user said "I hope your wife gets raped and burned by Islam (sic) ... Don't f--- with Trumps (sic) America."

"The reason I thought it needed to happen was – I have burned flags before – I do believe it essentially stands for genocide and slavery that this country is founded on at its core, and I think Trump is going to make that much worse," said Steve, whose identity has been withheld because of the threats.

The Philly Revolution Club member posted the video two days ago, and took it down around 8 p.m. Wednesday.

Steve did not report these threats to police, but he provided screenshots of the messages to PhillyVoice.

The goal of the video, he said, was to raise support for the club, which advocates "a communist world, free of exploitation and oppression"  and was formed in Philadelphia during the Democratic National Convention in July.

"This flag has been a symbol of death and oppression from Hiroshima to Yemen to Honudras to North Dakota and almost everywhere between. And now you want to outdo all of that with an openly fascist USA. No. We refuse to live that way. We will burn this flag to ashes and we will organize mass resistance to defeat you and stop your whole program."

While a few liked the Facebook page or left positive comments, the threats were too much.

The Philly Revolution Club joins a handful of other groups who responded to Trump's tweet by participating in the #flagburningchallenge. The New York City Revolution Club went so far as to burn the American flag outside of Trump Tower earlier this week.

Though, members of the Revolutionary Communist Party weren't the only ones to participate.

The U.S. Supreme Court ruled that flag-burning was a form of symbolic speech, protected in the First Amendment, and not a crime, in 1989.

And while Steve was prepared for some backlash, he does not think death threats were warranted.

"This is f---ed up, and this is scary that this is happening," he said.