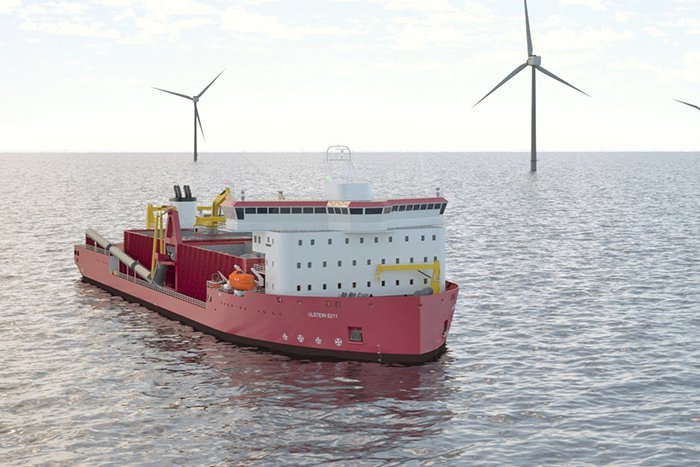 A rendering of the $200 million rock installation vessel the Philly Shipyard has been contracted to build. The technologically advanced ship will play a critical role in constructing offshore wind turbines on the East Coast.

The Philly Shipyard recently locked down a $200 million contract to build a cutting-edge vessel critical for constructing offshore, wind turbines.

The Texas-based Great Lakes Dredge and Dock Company has commissioned a 461-foot-long subsea rock installation vessel. The boat will have space for 45 crew members and 20,000 megatons of rock which it will deposit on the ocean floor to create foundations for new turbines.

Great Lakes has the option to buy a second vessel from the shipyard if construction of the first boat goes well, which would bring the total balance for the contract to over $380 million.

The first boat will be done some time in late 2024. If Great Lakes decides to move forward with a second vessel, it will be completed by late 2025.

The boat will likely be put to use somewhere on the east coast between Massachusetts and Virginia, Great Lakes' Senior Vice President Bill Hanson said.

The workers are proud to be building "a vessel which will be essential in achieving the nation’s ambitious offshore wind targets," said Thomas Grunwald, the shipyard's vice president.

News of the new high-tech boat came after the Biden administration announced its plans to double the nation's offshore wind generation to 30 gigawatts annually by 2030 earlier this year. That's enough to power 10 million homes.

Over that period, the cost of wind energy is expected to drop by more than 50%, which would make it more competitive with other forms of power like natural gas.

Although Pennsylvania obviously doesn't have any offshore wind turbines, the share of its power gleaned from wind has more than doubled since 2010 to almost 3,900 gigawatt hours, which accounts for 1.68% of the state's energy needs.

Two of Pennsylvania's neighbors with access to the Atlantic Ocean are trying to up their offshore wind capacity.

New Jersey, a state with roughly 130 miles of coastline, currently only has two wind farms, one in Bayonne and another in Atlantic City. Together they generate about 22,000 megawatt hours annually, which accounts for only about 0.04% of the state's energy needs.

Gov. Phil Murphy hopes his state will install enough turbines to supply 7,500 megawatts of offshore wind power, enough to power 3.2 million homes, before 2035 as part of his plan to make the state's energy infrastructure 100% renewable by 2050.

A key element of that plan is the Ocean Wind project, a collaboration between Danish energy company Orsted and local utility provider PSE&G to build out 1,100 megawatts worth of turbines about 15 miles off the South Jersey coast. The first part of the project is expected to be done in 2024.

In Delaware, perhaps the only state in the northeast more beach-oriented than New Jersey, there's currently only one active windfarm. The University of Delaware's turbines in Lewes generates about 5 megawatt hours, or about 0.11% of the state's power needs.

At present, Orsted plans to build out its Skipjack project, a wind farm off the coast of Fenwick Island which would provide 120 megawatts of energy to Maryland annually, enough to power 40,000 homes.

The company aims to have part of that project complete by 2026 and could potentially expand it afterward.

Orsted also currently holds a lease for another 96,000 acre parcel immediately north of Skipjack as part of a partnership with PSE&G called Garden State Offshore Energy. Although there are currently no plans to build there, the parcel could provide up to a megawatt of power to New Jersey each year.

Offshore wind projects in New Jersey and Delaware have been met with staunch opposition, mainly from residents of the waterfront communities who want to keep their views intact.

There are also environmental concerns in both states, as these projects would be hard to complete without damaging some of the fragile ecosystems along the Atlantic seaboard.

The two seem to be playing second fiddle to other states on the east coast when it comes to offshore wind.

When asked about where the new boats might be put to use, Laura Johnson, Great Lakes' marketing and communications manager, listed off roughly a dozen offshore wind projects in Massachusetts, Rhode Island, New York and Virginia, but none in New Jersey or Delaware.

The amount of power both states get from wind has remained roughly the same since 2014, while Rhode Island has expanded its wind power over 25 times in the same period. It now accounts for about 2.9% of the state's energy needs.

Thousands of acres off the coast of Rhode Island and Cape Cod in Massachusetts have been sold to energy companies looking to build offshore wind farms.

Construction is currently underway on Vineyard Winds 1, the nation's first commercial-scale offshore wind project, 15 miles off the coast of Martha's Vineyard, Massachusetts. When complete, the 62 wind turbines will provide over 800 megawatts, or enough power for 400,000 homes, each year.

Furthermore, Johnson said that New York -- which already gets 3.75% of its power from wind, edging out every other state in the Mid-Atlantic -- is exploring building out over 3,000 megawatts worth of turbines off the coast of Long Island.

Even Virginia, a state that currently gets none of its power from wind, is now piloting a 12 megawatt offshore wind farm off the coast of Virginia Beach and hopes to build out over 2,600 megawatts by 2026.

Hanson said that while offshore wind projects in the U.S. aren't exclusive to the east coast, the new boats being commissioned would not be useful on the west coast.

Offshore wind turbines in the Pacific Ocean would need to be constructed on floating piers rather than on the ocean floor, as the water off the west coast of the country is much deeper.

While the Philly Shipyard has long been a destination for private companies in need of container ships or tankers, President and CEO Steinar Nerbovik said in a release that the shipyard has been trying to diversify recently with more government-oriented contracts.

In addition to this new contract with Great Lakes, the shipyard is also currently in the process of building four National Security Multi-Mission Vessels for a Florida-based ship management company called TOTE Services.

These specialized vessels are used by governments to both train naval recruits and respond to emergencies on the homefront like natural disasters.

Like Great Lakes, TOTE has the option to commission a fifth vessel from the shipyard.