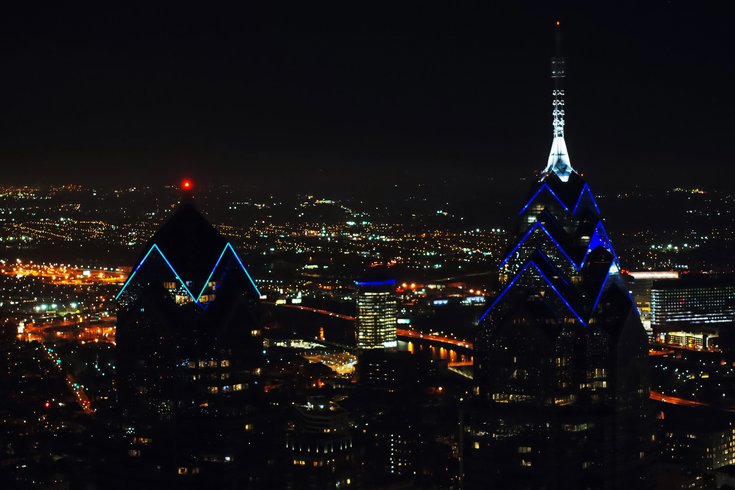 An exclusive app called My Liberty Lights allows users to control the exterior lights of One Liberty Place, the Philadelphia skyscraper shown above on the right.

The lights on top of One Liberty Place have changed colors for Eagles games, the Fourth of July, Juneteenth and COVID-19 awareness.

Users can book 5-minute sessions to customize the colors and animations displayed on the zig-zag lights at the building's top.

While access to the app only is available via invitation, an Instagram contest will give two randomly selected people the opportunity to access the app and set the light display. The winners also can invite two friends to the app.

To enter, people must follow One Liberty Place on Instagram and tag their friends in the comments. Each tagged friend counts as an entry. The contest ends Friday.

App users who book time slots will be emailed instructions for programming the lights and will be able to the watch the show via a webcam footage if they can't view it in person.

Users can choose the color combination and animated pace of the lights — everything from Eagles colors to red, white and blue.

The lighting on the building's zig-zag peak was upgraded this spring to feature animations for its color displays. It is made up of 72 sections of 20-foot LED panels that respond to solar queues, Billy Penn reported

The neighboring tower, Two Liberty Place, is owned and run by a different group and still bears static lights. For now, My Liberty Lights just operates the lights on One Liberty Place.

Other cities have similar light-control experiences. New York City residents can control some of the city's iconic buildings through an exclusive app called Spireworks. Users who are granted access have control of One Bryant Park and 4 Times Square, though One World Trade Center also is available on special occasions, Curbed reported.

One Liberty Director L .Stewart Brown said the choice to upgrade the lighting was driven by sustainability. The new LED lights are more efficient than traditional bulbs and fall in line with the building's LEED-Gold certification and Energy Star rating.

"We're extremely committed to sustainability," Brown said, "and we wanted to make sure that when we launched My Liberty Lights, we were using the most efficient lighting and technology possible."