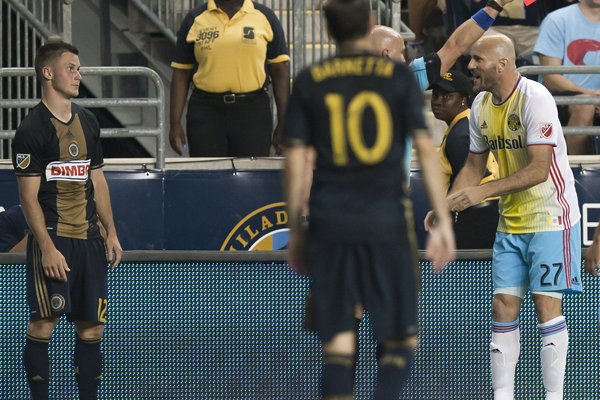 Conor Casey gets the side eye from Keegan Rosenberry after being sent off in the Union's 3-2 win on Wednesday night.

This time last year, the Philadelphia Union were lurching into June with three wins, eight losses, and three draws.

Andre Blake was injured, Rais Mbolhi was banished, and the Union needed an emergency loan just to get another goalkeeper on the roster. The club was in utter disarray and the Sons of Ben had organized a protest featuring the image of a former team executive inside of a coffin.

Jump ahead some 366 days, and this Union team is headed into the Copa America break atop the Eastern Conference table. Wednesday night's 3-2 win extended the Union's unbeaten streak to a franchise-record eight games and capped off a three-game, eight-day stretch that garnered five out of nine points.

It's a remarkable turnaround for the Union, who are experiencing their own Game of Thrones moment in the summer of 2016. Left for dead by the entirety of Major League Soccer, a perennially underachieving franchise is now in prime position to take back the castle of Winterfell make a run at the playoffs.

A few weeks back, Montreal midfielder Patrice Bernier referred to Vincent Nogueira as the Philadelphia Union’s “metronome.” He sets the tempo and serves as the glue that pulls together the Union lines.

Philly is certainly a better team when he’s on the field.

It's not to take anything away from Warren Creavalle and Brian Carroll, who have been very good this year. But Nogueira is just a different type of player. He’s not a number six. He is a box-to-box, ball-moving number eight, and that type of player isn't easy to find.

The Union looked much more rhythmic in their passing and final third entry on Wednesday night. They really seemed more threatening due to Nogueira's ability to take up good positions just outside the 18, or cycle the ball to the flanks to force defensive rotation.

Check out his event map and passing chart: 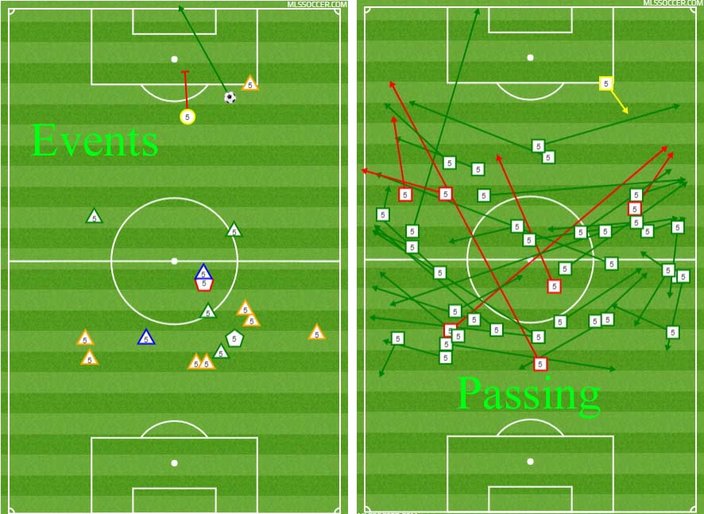 Vince did a little bit of everything on Wednesday night.

Event-wise, he had one goal on two shots, four tackles, two interceptions, and eight recoveries. The goal may have taken a deflection on the way in, but give him a lot of credit for cracking that ball on frame without having to take a first touch. The defensive side of his game was equally assertive and results in that really balanced stat line.

In passing, he went 34 for 40, plus one key pass, which was a layoff for a shot attempt.

Keep in mind, Nogueira did this in just 70 minutes of play, as he was making his first start in about two weeks. Normally he’ll get himself into the 55 to 60 range for total touches in a match, and you want him on the ball as much as possible.

Nogueira had himself a solid, two-way game and didn’t look to be hampered by injury at all.

The Union lost the possession battle in this game, even while playing 20 minutes with a man advantage.

It seems strange, considering the fact that Philly generated 17 shots and put 7 of those on frame. That’s more than the last two games combined, where the Union only mustered a combined 14 shots and 6 on goal against Colorado and Orlando.

The Union had been on a cumulative slide in this department since the LA game, going from 22 shots to 15 shots (at Montreal), to 11 shots (D.C.), to 9 shots (Orlando), then finally reaching the statistical floor with 5 shots in Colorado.

There are a few reasons for the resurgence in this department.

Philly caught Columbus with two backups in defense. Hector Jimenez was standing in at right back and Chad Barson deputizing in the middle.

The Union compiled 12 key passes to go along with three assists (no secondary helpers in this game). Instead of slowing it down and holding possession, they were seeing chances and taking chances.

They also “valued” their possessions more overall, forcing 14 Columbus turnovers and dispossessing the Crew 17 times. On the flipside, Philly only lost the ball eight times and turned it over ten times.

Jim Curtin’s press resulted in a 35 to 19 margin in tackle attempts, with a success rate of 83%. The chart below shows the Union in orange and the Crew in blue. Philly was basically more aggressive defensively and attempted to win the ball back with more urgency and closer to the opposing goal. 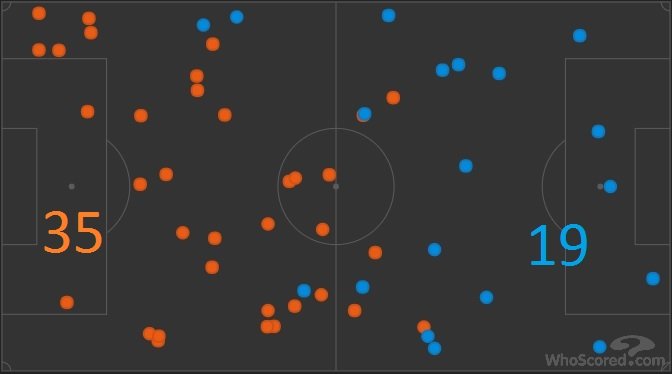 Whereas the Crew generally went for tackles in wide areas, the Union made more high-risk, high-reward attempts in that central area. The cluster of orange in the top left corner is the work of Fabinho, who did better after getting burned on the opening goal.

This was only the second time this year that the Union have scored more than two goals in a game. The only other time that happened was in the 3-0 win against New England, who also suffered a red card ejection.

Philly is still 8th in the league in total goals, so they’re just above average in that department. The defense, however, has only conceded 16, which is good enough for a +5 goal differential.

So what’s the takeaway here?

The Union basically struck more of a balance between defensive work rate and offensive efficiency in this game.

I liked that ball that he slipped through for Le Toux early in the game. It’s not a big part of C.J.’s game but shows that he can be more than just a target man.

He had a chance on a backheel flick a little later on, then got a head on a Rosenberry long-throw and steered the ball towards the top of the box for a Carroll shot. Sapong then worked hard to keep a ball in play that was surely going out, but no one was there to follow up.

Sapong only managed one shot in this game but did well in other areas before having to come off injured.

The assist on the Pontius goal is questionable since it was just a long, field switching ball.

Don't get me wrong; it was a great ball. But Pontius brings it down and takes about six steps along the 18 before taking that shot.

Anyway, Seba played an excellent two-way game, adding four key passes to go along with a nice compilation of defensive events. His ability to get up and press really caused some dicey moments for Columbus, which is a team that puts a huge emphasis on building out of the back.

Active early, Barnetta fired two shots on goal in the first ten minutes of the game.

The Union just didn’t get the same type of production from the number ten spot last season. Cristian Maidana was an assist machine and a very good counterattacking player, but Barnetta just has a better all-around game and can help out on the defensive side as well.

Again, Pontius continues to maximize his contributions relative to the time he’s spending in and around the run of play.

For instance, he only had 32 touches last night. The only field player with fewer touches was C.J. Sapong. But Pontius contributed a goal and assist while also doing the defensive work required of the midfielder that plays in front of Fabinho.

His pass completion rating was around 95% in this game, which was second to only Mohammed Saied. Carroll really is a great complement for Nogueira, as he sits and reads the game while his midfield partner moves the ball around.

The only blemish on BC's performance was the second Columbus goal, where he gets back in time to read the play, but can't get high enough to get a head on that cross into the box.

The most important thing for the Union is that he’s healthy, with a long break coming up.

He got burned by Ethan Finlay on the first Columbus goal, then steadied the ship for the remainder of the game.

There was a goal-saving clearance in the 84th minute that stood out as his biggest play of the night.

He isn't culpable on the first goal, because when Fabinho gets beat, he's pulled out of position to close the space on Finlay.

On the second goal, he's retreated correctly to the six-yard line, and there really should have been a defensive midfielder there to cover.

An eventful first half for Tribbett, who lost his footing on the Columbus opener.

Tribbett then took a bad yellow card when he fell asleep on a routine play and got beat for speed, but redeemed himself by clearing the resulting restart off the line.

On the second Crew goal, he probably could have done better to challenge Finlay on the endline.

Another solid game for Rosenberry, who did two-way work up and down the right flank.

He still looks a bit “off” in his attacking game, at least compared to what we saw in the first six or seven games this season. Only one of his three open play crosses came off, but he'll look a lot sharper I think when Ilsinho is healthy and playing in front of him.

It wasn't the most convincing performance for Jones, who told reporters after the game that he wasn’t happy with the second goal.

Earlier in the second half, he also flapped at a corner kick that ended up coming off the post. There was another bobble in the box that he was able to smother.

Otherwise, Jones was pretty good with the ball at his feet and kept the Union backline relatively organized. I'd say you're probably going to be pretty rusty when playing your first top-level game of 2016.

Whenever he gets on the ball, you can feel the anticipation in the stadium. Everybody knows that something special is about to happen.

Twenty minutes of defensive reinforcement in the midfield, it seemed like he could have been in better position on the second crew goal.

Give him credit for the tackle that leads to the Herbers goal.

That's the way to score your first MLS goal.

Conor Casey’s sending off was unwarranted and significantly changed the game.

Marc did a great job filling in for J.P. Dellacamera.

Calling a soccer game is completely different than calling a basketball game, but Zumoff does a good job of letting the game breathe while adding relevant bits of information to give the broadcast a nice “pace”. It’s something that Gus Johnson had trouble with when he started calling soccer games. Gus just couldn’t seem to downshift from the intensity of basketball and football.