One day, the technology could be used to print whole organs for transplantation. 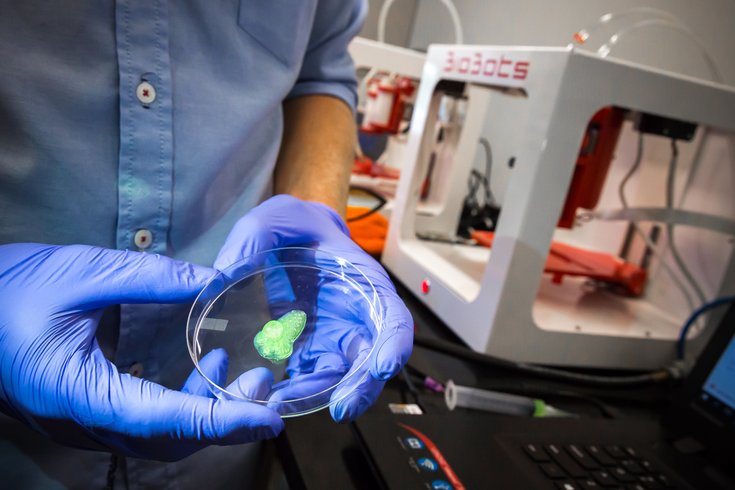 Jakub Lewicki, a bioengineering intern at BioBots, a biotechnology company based at the Pennovation Center, holds a 3-D model of a nose bioprinted in fluorescent hydrogel.

In the summer of 2014, while many of his fellow Penn students were spending their days interning at big tech companies and investment banks, computational biology major Danny Cabrera was busy trying to build a working bioprinter.

Instead of using traditional color inks, a bioprinter uses bioinks made out of living cells. The idea behind the technology is to print three-dimensional biological tissue and, eventually, whole organs for transplantation.

“I was a senior in college, and this bioprinter ended up being my senior design project,” said Cabrera, who collaborated with his friend and Penn research specialist Ricky Solorzano on the prototype. “From there, we started to build a couple of these devices in our dorm room and sold them to scientists around the world.”

They fashioned together a makeshift lab in Solorzano's apartment above campus bar New Deck Tavern on Sansom Street and decided to start a company called BioBots. Their momentum has yet to stop.

Cabrera and Solorzano — along with third co-founder Sohaib Hashmi — took the top prize at Pennvention that year, an invention competition with a $5,000 prize and a review from accelerator program DreamIt Ventures. Later that year, BioBots became part of DreamIt's second class of startups for its health-focused accelerator, DreamIt Health. The company received $50,000 in funding, office space at the University City Science Center, mentoring, and other resources.

The prototype was built with existing 3D printer components that were meant for use with traditional materials like plastic. In 2015, BioBots officially launched the BioBot 1, the world's first commercially available desktop 3D bioprinter. With a price tag of $10,000, the BioBot 1 is a sleek, stylish 12-inch cube that prints biological tissue with 100-micron resolution — about the thickness of a human hair. The bioinks come out of an extruder head, where visible blue light cures biomaterials rapidly without causing cell damage.

“From a technology perspective, the biggest challenge was figuring out how to keep the cells alive and making sure that the printing process was not harmful to them,” said Cabrera, now CEO of BioBots.

They also sell cartridges and tissue kits that contain different biomaterials like collagen, gelatin and alginate. While the printer cannot build implantable whole organs, it can create small model organs that may be used for drug testing and other research purposes. Earlier this year, the company released the BioBot 2 which sells for $40,000. The latest bioprinter boasts six temperature-controlled extruders for different biomaterials, sub-micron precision and auto-calibration. 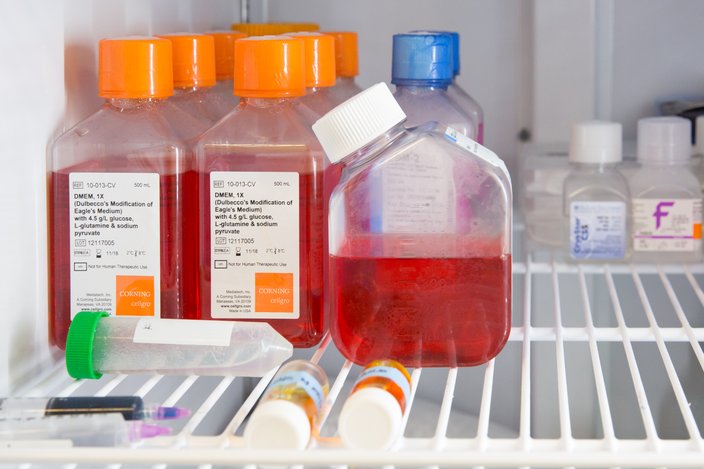 Cell culture media used to support in-vitro cell growth is stored in a refrigerator in the 3-D bioprinting lab.

THE MAKING OF HUMAN TISSUE

Researchers around the world have used BioBots' printers to make heart, lung and stomach tissue, along with cartilage and bone. Chamith Rajapakse, assistant professor of orthopedic surgery at Penn Medicine, was an early BioBots customer since he knew Cabrera and Solorzano as students. His lab focuses on how to best treat and manage bone defects by using medical imaging techniques like MRI and CT.

For instance, certain defects cannot heal by themselves and require a bone graft to replace missing regions. Although bone grafts are often harvested from the patient's own body, a bioprinter that could manufacture the perfect-sized, patient-specific bone graft would greatly advance the field. The project is still in early stages, but Rajapakse's lab has begun to print models of actual patient bones as a start.

“We are using a biocompatible material that mimics the stiffness and properties of bone,” said Rajapkse. “It's not biological but it's biodegradable. The idea is to implant it into the body, and over time it degrades while real bone grows in.”

They tested out the printer's capabilities with a few preliminary experiments and decided to purchase one earlier this year.

Although its popularity has skyrocketed only in the last several years, the history of 3D printing actually goes back decades. In 1984, an American engineer named Chuck Hull filed a patent for a new method of manufacturing he called stereolithography. The system used a focused beam of ultraviolet light to trace the shape of an object within a vat of liquid photopolymer, forming a solid. Instead of waiting months to prototype new product designs, a stereolithography apparatus could create three-dimensional plastic objects in a fraction of the time.

More than 30 years later, Hull's invention — now known as 3D printing — has found its way into just about every industry. 3D printers have been embraced for industrial manufacturing and prototyping as originally intended, but they have also created intricate clothing, jewelry, food, and even firearms. Researchers have gone on to print patient-specific implants and medical devices, such as a jaw replica or hip replacement. And a few years ago, the first 3D-printed pill received approval by the U.S. Food and Drug Administration. 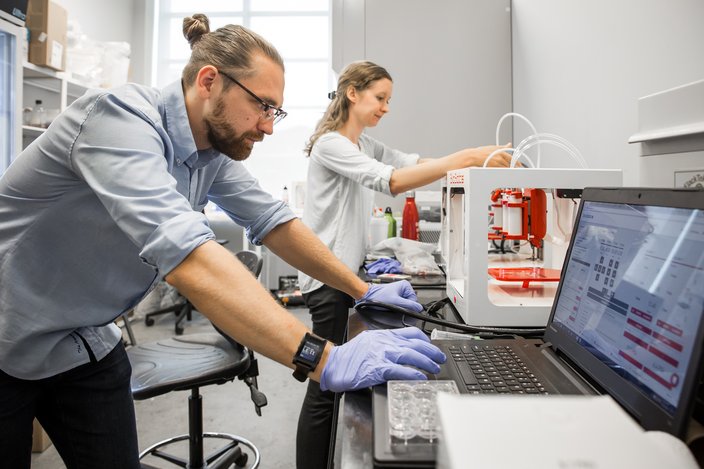 Bioengineering intern Jakub Lewicki, left, and bioengineer Margaret Prendergast work in the bioprinting lab at BioBots, located at the Pennovation Center in Philadelphia.

Now bioprinting whole organs for transplantation appears to be the next big frontier for 3D printing in medicine. While a number of other companies and research groups have developed their own 3D bioprinters, including Organovo and Advanced Solutions Life Sciences, BioBots emphasizes usability and affordability in its line of products. Many advanced 3D printers can take up an entire room, require a team of scientists to operate, and cost upwards of $200,000.

In comparison, the first beta testers for BioBots got an early version of the printer for only $5,000 and included researchers from Penn, Drexel and Mt. Sinai Hospital in New York City.

“The BioBots printer was a good starting point for us, but we are now considering buying a larger-scale printer not from BioBots,” said Rajapakse. “We'd like to start printing with titanium since that’s a material we need to use for orthopedic implants.”

Wei Sun, chair professor in the College of Engineering and director of the Biofabrication Laboratory at Drexel University, says that BioBots might make a good beginner product for people to tinker around with, but it isn't made for serious researchers. His lab has worked on bioprinting since the early 2000s and most notably has printed cancer cells to built an in vitro 3D tumor model for drug testing. In 2014, Sun and his colleagues founded SunP Biotech, a research and manufacturing company that specializes in 3D bioprinting and tissue engineering.

“I'm happy to see the young generations working on this, but to me, the BioBots printer is a toy,” said Sun. “It looks nice and prints cells, but this machine won't be advanced enough to do serious work.”