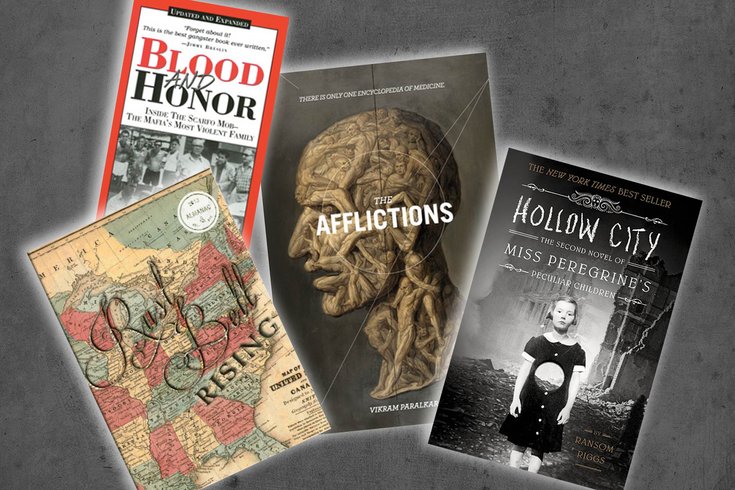 Published in Philadelphia: from bottom left, Rust Belt Rising : Almanac 2013, published by The Head & The Hand Press in January 2013; "Blood and Honor" by veteran mob reporter George Anastasia, published in 2013 by Camino Books; "The Afflictions" by Vikram Paralkar, published in 2014 by Lanternfish Press; and "Hollow City: The Second Novel of Miss Peregrine's Peculiar Children" by Ransom Riggs, published by Quirk Books in 2014.

Back in the early days of the Republic, Philadelphia was home to many of America’s finest publishing houses. Over the course of the second half of the 19th century, however, New York began to draw more and more of the trade into its orbit, leaving behind only medical publishers and the odd academic outfit.

But in recent years, especially since the beginning of the new century, Philly has been developing an independent publishing scene to rival those in other coastal cities.

These literary and non-fiction publishers range from the most established houses like Quirk, which regularly features on the New York Times bestsellers list, to the constellation of small non-profits often staffed by volunteers. These niche presses are devoted to publishing the kind of unorthodox, or just unestablished, authors – often locals – that major publishers are less inclined to experiment with in today’s hypercompetitive market.

Close to 20 independent presses operate in the Philadelphia metropolitan region, ranging from old mainstays like Camino Books and P.M. Gordon Associates, to the newest entrants like The Head & the Hand or Lanternfish.

“Looking around at the Philadelphia community over the last few years I’ve really seen the emergence of more independent literary presses,” says Brett Cohen, president of Quirk Books, the largest of the city’s indie presses. “While the distribution isn’t as wide, a lot of them are doing what we do and really focusing on a niche. We have a really small list, but we pride ourselves on focusing on really different, interesting, unique books.”

Philadelphia’s scene has its counterparts in other large cities, and combined they fill an important market segment. In New York, the big five publishers have seen their business model threatened by Amazon while they struggle with the expectation of short-term profits from the shareholders of their parent media conglomerates. As a result, there is great pressure to rely heavily upon authors who can be expected to churn out mega-hits. On the other end of the spectrum, worthwhile authors can only occasionally be dredged up out of the enormous quantities of entrants to the self-publishing industry.

Indie presses are a happy medium, providing quality control while giving a chance to books like The Afflictions, which Lanternfish released last year. Written by Penn hematologist Vikram Paralkar, the novella is an immersive encyclopedia of mystical illnesses that bedevil a world akin to Renaissance-era Portugal, but with a serious case of magical realism. The unique format of the novel provides glimpses into a lovingly, but sparingly, detailed universe touched with shades of Albert Camus, Jorge Luis Borges and Gabriel Garcia Marquez. 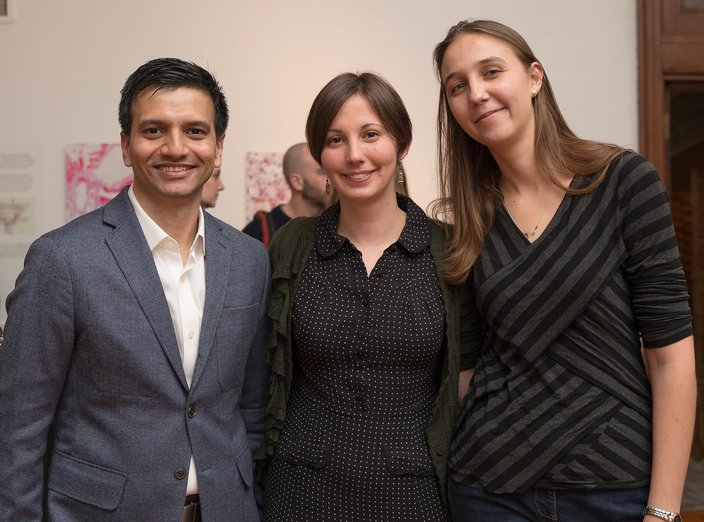 But there is no action, the main character doesn’t have a line of dialogue, and there’s nary a hint of sequel potential. Imagine taking that to a pitch meeting at Simon & Schuster.

“We move towards quirkier fiction that wouldn’t necessarily find a home [elsewhere],” says Amanda Thomas, operations manager at Lanternfish Press, which chose The Afflictions as its first original publication. (Its first book was a reprint of Sherlock Holmes stories, which are freely available in the public domain.)

“Really big publishing houses have a tremendous amount of overhead, so they are beholden to that bestseller in a way that smaller presses are not," Thomas said. "We can choose books that don’t have a giant audience because we are really small and scrappy and don’t have the huge apparatus of a large publishing house.”

One particularly onerous piece of the apparatus for small presses is offset printing, which is only economical if books can be sold in bulk quantities. With offset, it's as expensive to print 100 books as 1,000, so the unit cost of small orders are unbearably high, especially because of the risk that many copies might end up sitting around unsold in the basement.

Digital printing, however, allows for immediate response to small orders, the kind most likely for indie press products – at least initially. When paired with the availability of online sales, digital printing allows small publishers a real shot: They don’t have to worry about warehousing and can just print the books as they are ordered from Amazon.

Although the model allows independent publishers to operate without excessively burdensome costs, the profits are small, too. Many indie presses are non-profits staffed by volunteers, because they lack the money to pay staffers. Lanternfish hopes to turn a profit after they have 10 to 12 titles to their name (they will soon have four). But even better established small houses, like P.S. Books, may operate in the black but are still dependent on free labor.

This model also results in different rewards for authors. Few of these independent presses can offer advances, although royalties range from the industry norm of 10 to 15 percent to more generous 50/50 splits. Authors who work with small presses do tend to have a much greater degree of direct input and control over the material, including cover art and title – decisions that are often taken away at larger publishing houses. But the biggest boon for many authors, may simply be the opportunity to get their work edited, packaged and on the shelves.

“The Afflictions was turned down by many agents for being too unusual in structure, even by those who liked it,” says novelist Paralkar, who is now working on his second book. “If it hadn't been for Lanternfish Press, [it] might still not have been published. But now that it's out there, it's finding an audience. It’s even being translated into Italian....”