What does it mean for you?

A law that requires employers to provide paid (and in some cases unpaid) sick leave to their workers goes into effect on Wednesday in Philadelphia, after Mayor Michael Nutter signed a bill to approve it despite vetoing similar legislation in 2011 and 2013.

So, what does that mean for you? The city released a poster in April that breaks down who is and isn't eligible, requirements for employers, and what to do if you're refused paid sick leave by your employer. 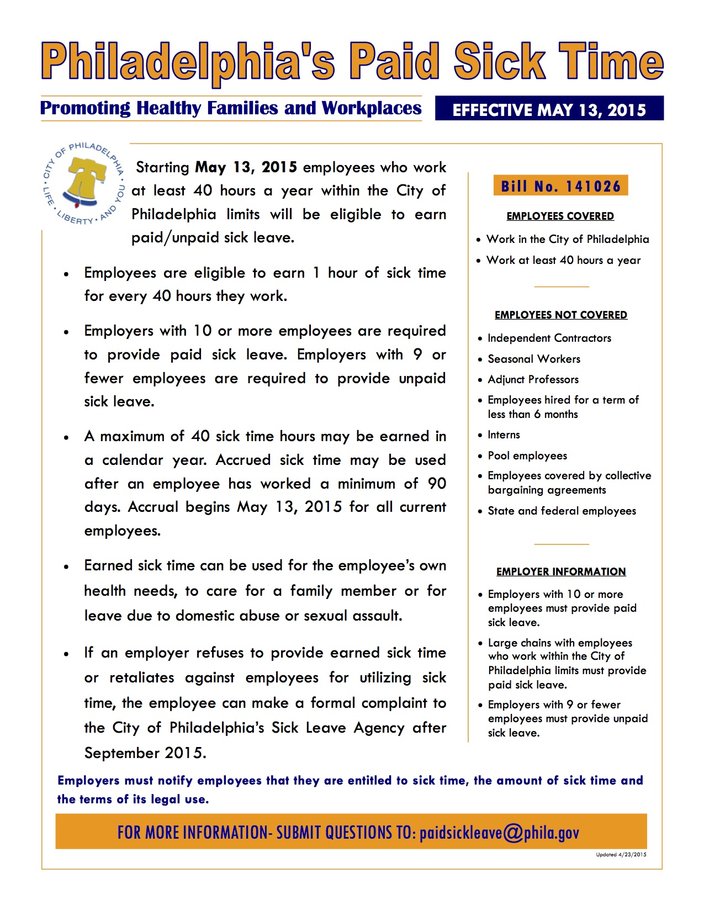 That's the bare bones of the law. To offer additional insight into what employees and employers can expect Wednesday, several law firms and journals have outlined details of the new law.

The National Law Review laid out what requirements need to be met to qualify for paid sick time under the new law:

...can be used to respond to physical or mental illness, to care for ill family members, to attend preventative or diagnostic medical appointments, and to respond to the physical, psychological, and legal ramifications of domestic abuse, sexual violence, or stalking.

In the same post, it is pointed out that employers who currently provide paid sick leave or similar paid time off for their employees who meet or exceed the law's requirements do not have to provide extra sick leave. Also, consecutive days off require "reasonable documentation," such as a note from a healthcare professional.

The National Law Review also points out how unused hours carry over:

Unused sick time must be carried over to subsequent years unless the employer elects to provide 40 hours of paid sick time at the beginning of each calendar year.

Essentially, your employer can provide a block of 40 hours at the beginning of the year, which doesn't carry over if you don't use it all. If it doesn't provide a block, you get to roll over unused sick time to the following year.

Employers must also formally notify their workers of the law and their rights under it once it goes into effect Wednesday, as noted by law firm Ogeltree Deakins, which represents a number of employers. Also, your employer can't take paid sick leave into account if they're taking disciplinary action against you.

While all of this may sound like a victory for Philadelphia workers, don't expect Wednesday to be the last you hear of it. Pennsylvania's Republican-controlled Senate has been working to try to override Philadelphia's law, despite a guaranteed veto from Governor Tom Wolf.