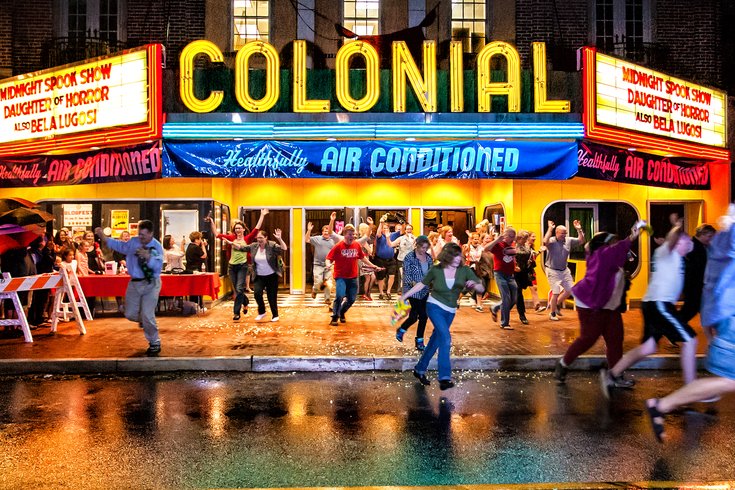 Each July, cult movie fans flock to Phoenixville’s historic Colonial Theatre, where many scenes from the 1958 movie "The Blob" were filmed.

It's absurd. It's campy. It's oh-so-fun to watch. "The Blob" has captivated audiences since it was first released in theaters in 1958.

In the film, teenagers Steve (Steve McQueen) and Jane (Aneta Corseaut) try to protect their hometown from an alien life-form that consumes everything it touches.

Below is the schedule of events. Tickets are required for most Blobfest activities.

In the late '50s, a big scene in "The Blob" was filmed at Phoenixville's Colonial Theatre. Each year, to kick off Blobfest, fans reenact the moviegoers screaming and running from the building.

Before the run out, which takes place at approximately 9 p.m., there will be special guests and performances to entertain participants.

Only 350 tickets total are available and the event tends to sell out quickly.

The next day, after everyone runs for their lives, there will be a street fair outside of the Colonial Theatre. Attendees can listen to live music, watch a parade, participate in a costume contest or just eat, drink and hang out.

"The Blob" and "It Came from Outer Space"

The double feature will be shown twice. There will be a noon and 3:45 p.m. screening.

In "It Came from Outer Space," a spaceship from another world crashes in the Arizona desert, but when the local townsfolk begin acting strangely it's only an amateur stargazer and a schoolteacher who suspect alien influence.

"The Blob" and "The House on Haunted Hill"

In "The House on Haunted Hill,"  a millionaire has a proposal for five guests at a possibly haunted mansion: Show up, survive a night filled with scares and receive $10,000 each.

In the horror flick, a talented sculptor and his business partner own a wax museum together. When the business partner burns down the museum to collect the insurance policy, the sculptor is thought to have died inside. He ends up surviving but turns vengeful and murderous.

"The Blob" and "The Lost Skeleton Returns Again"

A double feature with bonus activities will close out Blobfest. "The Blob" will be screened at 2 p.m. and after there will be live music from Michale Graves.

The next movie, "The Lost Skeleton Returns Again," will begin at 4 p.m. At the end, there will be a Q&A with producer Mark Allen Stuart.

"The Lost Skeleton Returns Again" was made much more recently than any of the other films being screened over the weekend. The 2009 jungle-adventure flick is about a priceless mineral buried in the Amazon that everyone wants to get their hands on.