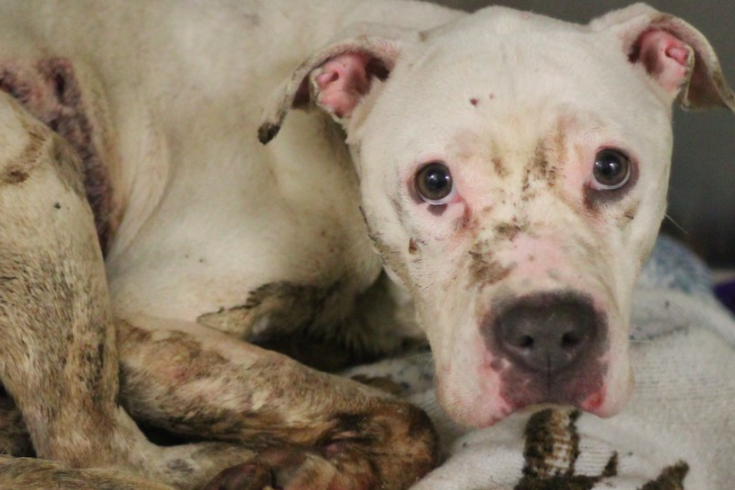 Woobie, a one- to two-year-old pit bull mix, was found suffering from multiple stab wounds on March 5 in North Philadelphia.

Humane officers with the Pennsylvania SPCA are searching for a suspect who they say stabbed a dog and seemingly left her to die Monday morning near SEPTA Fern Rock Station.

Authorities said the dog, a 1- or 2-year-old pit bull mix named Woobie, was found by a Good Samaritan near the station in North Philly, suffering from multiple stab wounds.

Woobie was picked up by the Animal Care & Control Team and transferred to the PSPCA for an evaluation of her injuries, which included wounds on her rib cage, trauma to her lungs and possible internal bleeding. She was later transferred to Penn Vet’s Ryan Hospital to be treated as part of the Penn Vet Shelter Medicine's Richard Lichter Charity for Dogs Program.

Woobie is listed in stable condition and will undergo exploratory wound surgery.

Investigators said Woobie was found around 7:45 a.m. on Monday. Investigators are trying to determine the identity of Woobie's owner and figure out whether anyone may have witnessed her being dumped outside the station.

“While we don’t know the whole story, we do know that Woobie was stabbed at some point and left to die,” said Nicole Wilson, director of humane law enforcement at the PSPCA. “We are seeking the public’s help to uncover what happened, who did this and bring them to justice.”

Anyone with information in this case should call the Pennsylvania SPCA’s Cruelty Hotline at (866) 601-SPCA. Tips can be left anonymously.