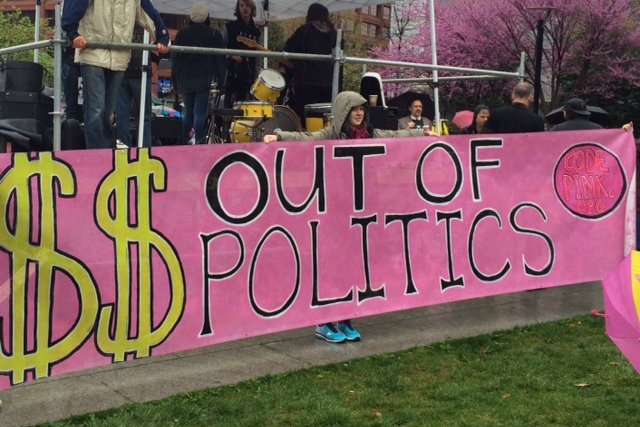 The current version of free speech in America, with big money talking loudest, is wrong according to the group Democracy Spring. The group began a march two Washington D.C. Saturday from Independence Mall. The group plans to stage sit-ins once they get to Washington.

The current version of free speech in America, with big money talking loudest, is wrong.

That’s the message of Democracy Spring, which kicked off a walk on Saturday at Independence Mall, with a plan to stage massive civil protests and provoke thousands of arrests in Washington, D.C.

An assemblage of liberal, but disparate groups – Friends of the Earth, MoveOn, the National Organization for Women (NOW), the Voucher Vendetta and more – cheered each other on as they began a walk to Ridley Park in suburban Philadelphia.

Curt Ries, deputy director of Democracy Spring, and a man who has been arrested for disrupting the United States Supreme Court over the issue of money in politics, said the American ideal of democracy is “grossly unfulfilled.”

He said rather than the ideal of one-person, one-vote, politics has become more about using wealth to influence elections than casting individual votes.

That’s why his group is walking to Washington, he said.

They plan six days of nonviolent sit-ins calling for the passage of bills to expand voting rights, ensure fairer elections and overturn the Supreme Court's 2010 Citizens United decision, which opened the way for businesses and their wealthy owners to sway the political process through donations to Super PACs.

Ries, who plans to be arrested, said 3,000 have pledged to face jail, and 1,000 of those pledges have already been vetted.

If all of the pledges make good, it will be the largest civil disobedience act in United States history, said Ries.

That remains to be seen, though: while the organizers had hoped to turnout 300 to 500 on Saturday, the true number was “no more than 150,” according to an Independence Park ranger who watched the peaceful crowd at a distance.

Ries said the group’s actions in Washington will “change the narrative” and advance the call for “free and fair” elections, rather than the “corrupt” process that dominates now.

That would mean overturning the Citizens United decision, funding elections either through small donations only or with public funding, and enhancing voting rights, including same-day registration.

While formally non-partisan, Ries acknowledged that many of those involved are supporters of Democratic candidate Bernie Sanders.

He said that is because Sanders is the only candidate addressing the issues of concern to the members of Democracy Spring.

“Naturally, there’s a crossover,” he said.

Two tourists in from suburban Washington, Mike and Claudia Burke, were taking in the Liberty Bell Saturday morning and didn’t even notice the protest at the other end of the lawn.

Told of the subject of their protests, Claudia agreed with their concerns – right up until she heard the group planned six days of protests that could have a bad effect on already horrible traffic in Washington.