Discovery made by concierge outside condominium complex in Hackensack 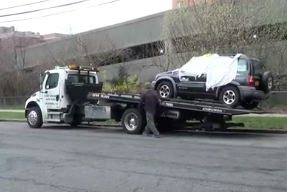 SUV towed away from scene on Overlook Avenue in Hackensack.

A couple found dead Friday morning in a parked SUV in Hackensack died as a result of carbon monoxide poisoning inside the vehicle, according to police.

A 2002 Chevrolet Tracker with New York plates was discovered outside a high-rise condominium complex with two bodies inside, The Record reports. Earlier, the Daily Voice and other outlets, including PhillyVoice, reported that the couple died while having sex in the SUV. The Daily Voice initially reported this with information allegedly shared by emergency responders.

Later Friday afternoon, police announced that the victims were a 29-year-old Hackensack man and a 24-year-old New York City woman who fell asleep inside the running vehicle. Detective Capt. Patrick Coffey told The Record there were no signs of a struggle or suicide. He said reports that they were having sex were innacurate.

The bodies were first discovered by Chris San Martin, the concierge at the condo complex, who said he saw a woman suspiciously reclined on a seat and notified authorities.

The vehicle was later towed away on a flatbed with the bodies still inside.