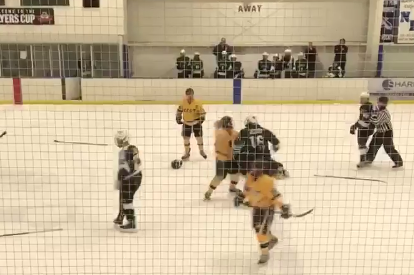 An investigation is underway after a hockey game was halted when players from two Philadelphia suburban high schools brawled on the ice, authorities said.

On Friday, the Hatfield Township Police Department confirmed two players were injured in the fight at a Flyers Cup Class 2A playoff game between Central Bucks West High School and Ridley.

Authorities said officers arrived at the rink around 10:20 p.m. for a report of a fight in progress.

According to the Intelligencer, there were seven minutes remaining in the third period and CB West was holding a dominating 7-1 lead when the brawl started.

Footage of the incident was shared on social media. CB West was wearing yellow sweaters and Ridley was wearing dark sweaters. Warning: The video contains profanity.

The video shows several players on the ice throwing punches as officials struggle to keep order. Parents and fans in the crowd are heard encouraging the violence on the ice.

The game was suspended and declared a victory by forfeit for CB West.

West defeats Ridley 7-1. West played well and hard and clean. It's unfortunate that we had to be part of the end of that game. We move on.

Police said two CB West players were injured during the brawl. One was transported to Abington Memorial Hospital for medical treatment.

Anyone with information or video recording of the events is asked to contact the Hatfield Township Police Department at (215) 855-0903.