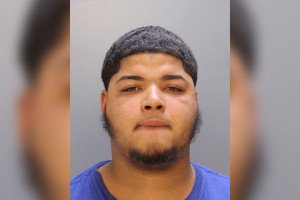 Police believe Ativa Jackson, 19, of the 100 block of West Wishart Street, in Kensington, is responsible for the Jan. 3 shooting that killed two men and injured a boy.

On Tuesday, the Philadelphia Police released the identity of a man who police believe is responsible for the Jan. 3 shooting of three people. The incident left two men fatally wounded and a boy in critical condition.

Police are seeking help from the public to find, Ativa Jackson, 19, of the 100 block of West Wishart Street, for the shooting. Raul Rodriguez, 21, of the 3600 block of N. 3rd Street and Richard DaVilla, 47, of the 3300 block of North American Street were killed in the shooting.

Police said Jackson should be considered armed and dangerous.

According to police, Rodriguez was found suffering from a gunshot to the back of his head, and DaVilla had wounds to his right thigh and left back area. Both were taken Temple Hospital.

A third victim, a 17-year-old boy, was found at the scene, suffering from a gunshot wound to the face. He too was taken to Temple Hospital where, police said, he was listed in critical condition.

The city of Philadelphia offers a reward of $20,000 leading to the arrest and conviction of the suspect(s) for all homicides.

You can also submit an anonymous tip to police, here.