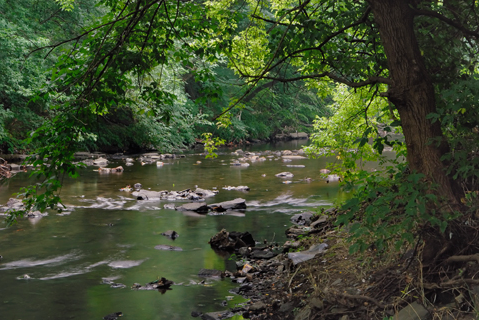 Philadelphia police suspect a pattern rapist is sexually assaulting young women in the Cobbs Creek Golf Course area in the Southwest of the city, near the border with Upper Darby.

Leaders of the special victims unit and other officers are patrolling the vicinity of the attacks on motorbikes, golf carts and on foot, looking for physical evidence, Capt. John Darby and Lt. Anthony McFadden announced Thursday afternoon.

The attacker in both attacks is described as a muscular Hispanic male of about 5’ 5”, clean-shaven and with close-cut hair.

Darby said the hallmark of both attacks were that that they were sudden and violent.

“He appears and pounces,” said the captain.

The first attack was July 11 and the second August 14. They happened just a few hundred yards apart.

In the first instance, a 26-year-old woman was cutting through on Cardington Street near Lansdowne Avenue on her way to work via the 69th Street Terminal in Upper Darby at 3:30 a.m.

The attacker grabbed her, dragged her onto the golf course and sexually assaulted her before fleeing towards Haverford Avenue.

During the second incident, a 39-year-old woman was walking on the golf course at about 8 p.m. when a man attacked her and began pulling her pants down.

When she resisted, he punched her in the face, knocked her out, and sexually assaulted her. His direction of flight is unknown.

That man wore a T-shirt during both attacks, first white, and then red, said police. The man did not speak to his victims.

Neither victim got a good view of the attacker. So far, there is no physical evidence linking the two crimes, said Darby.

“It’s a stroke of the paintbrush that tells me we should be talking about this as one,” said Darby.

Police asked the public to call 911 if they are in the Cobbs Creek area and see anyone matching the description.