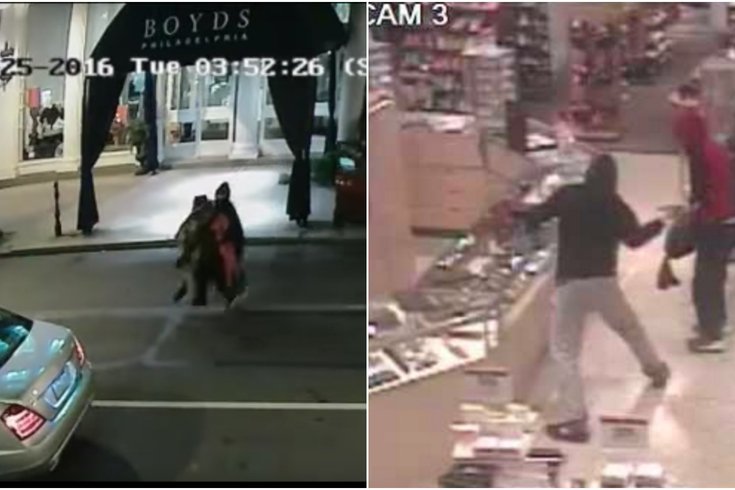 Police said they've noticed a similar smash-and-grab pattern in two robberies that occurred in Center City and the Northeast.

Philadelphia police believe that some of the same suspects involved in Tuesday morning's smash-and-grab robbery at Boyds in Center City may be tied to a robbery at Macy's in Northeast Philadelphia.

On Wednesday, police released a video showing a group of people taking off with $45,000 in merchandise after a 2016 Toyota Rav4 smashed the high-end retailer's storefront window. A group of people also involved in the robbery were also seen coming out of a 2012 Mercedes-Benz S350.

On Thursday, three men were seen coming into the Macy's on Cottman Avenue in ski masks, jean, hoodies and gloves. The suspects then smashed the glass of a Movado display and threw 14 watches valued at more than $16,000 into trash bags before fleeing.

The suspects then got into a Mercedes-Benz with a PA HVA-3241 license plate. Police said that they have since recovered the Toyota used in the first robbery.

Anyone with any information is asked to call Central Detectives at 215-686-3039.