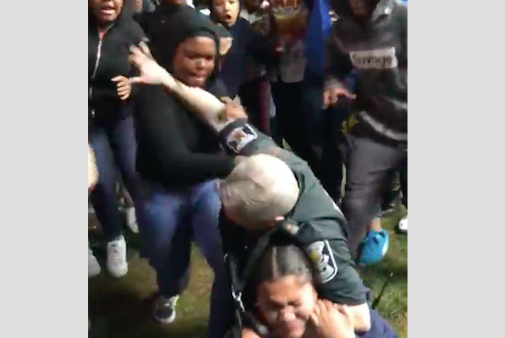 In a video on Instagram, two Norristown police officers are seen breaking up a large fight occurred at the St. Francis of Assisi Church carnival on Saturday, May 11, 2019.

Police in Norristown are investigating a fight that occurred Saturday night at a church carnival where an officer was recorded holding a teenage girl in a chokehold.

Viral video of the incident is sparking outrage from community members, who are calling for an internal investigation and suspension of the officers involved.

Police said officers were called to the St. Francis of Assisi church carnival around 8 p.m. Saturday night following reports of fights involving large groups of juveniles. Video of the incident shows one officer repeatedly pushing a group of people away from a second officer who is holding a girl on the ground.

The second cop eventually puts the girl in a chokehold with one arm and is seen throwing punches in the direction of other juveniles that approach him. The first officer then pushes one girl into a crowd of bystanders, while another girl rushes at the second officer and begins to punch him.

The video ends after a third officer threatens to deploy pepper spray and the crowd disperses.

Going right to y’all chief !! Norristown PD at its finest.. Make it go viral !!!!!!! First girl got thrown to the ground because she was walking towards a girl arguing, other cops continued to aggressively push people and threaten them, the other cop is being very physical with the 14yr old girl on the ground, choking her , hitting her , etc. second girl: thrown to ground for hitting a cop after he hit her twice, while on the ground being kneed in the back and legs. There’s ALOT more to this video. This shit NEEDS to stop.

At a press conference on Sunday, Norristown police confirmed one person is still in custody and an investigation is pending. The officers involved in the incident remain on active duty, WHYY reported.