The event, prompted by videos posted by state Rep. Brian Sims, was billed as a protest against bullying and abortion 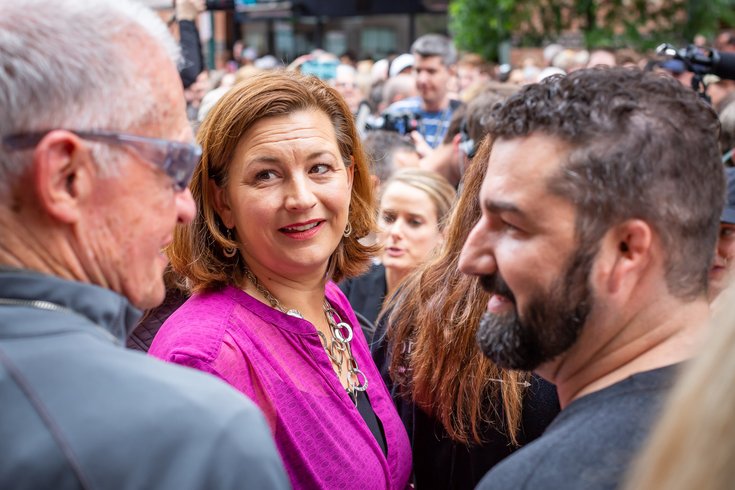 Ashley Garecht, mother of the two girls confronted by state Rep. Brian Sims outside the Planned Parenthood in Center City Philadelphia, spoke at the protest on Friday, May 10, 2019.

Ashley Garecht returned to Center City from the near suburbs on Friday morning, but the scene outside Planned Parenthood’s Elizabeth Blackwell Health Center was substantially different than her last visit.

On the Thursday before Easter, Garecht, her two teenage daughters and one of their friends were near 12th and Locust streets. She said they were there to pray in their pro-life beliefs when a man they didn’t recognize approached using a phone as a camera.

At first, she thought little of it, but it soon became a “very intense experience.”

“He was asking for the girls' IDs, and their addresses. It was horribly inappropriate,” Garecht said. “I had no idea who he was and when I found out (this past Monday), it made it all the more shocking.”

The man was state Rep. Brian Sims, who was streaming live on the Periscope app while all that was happening. When Sims’ footage – and subsequent explanation and measured apology – went viral this week, fervent reaction to it drew hundreds to Locust Street on Friday, where Garecht shared that story.

Billed as a “Rally Against Bullying to protest abortion and Sims’ treatment of pro-life individuals,” a mass of pro-life supporters from near and far flooded the streets, leaving the half block between 12th and Sartain streets practically impassable by foot.

Philadelphia police had blocked off Locust Street to vehicular traffic, a news helicopter hovered overhead and no counter-protest was seen. Planned Parenthood escorts worked tirelessly to keep the sidewalk clear in front of the entrance, despite event speakers setting up shop not too far away.

The crowd – which would number around 1,000 though police didn't release an estimate – started gathering well before the scheduled 11 a.m. start time.

Though Sims issued a statement on Tuesday saying, in part, that “I know that two wrongs don’t make a right, especially when I’m on the front lines of this civil rights battle,” the event featured the energy of a group galvanizing around a divisive, decades-old issue given new life by Sims video and legislation aimed at strictly limiting access to abortion.

There was a “Pray for Brian” sign posted on a neighboring building and a truck parked nearby with a flashing ad for Relevant Radio (Talk Radio for the Catholic Life).

Protesters held signs that read “Pray to End Abortion,” “Face It, Abortion Kills,” “Aborticide is the American Holocaust” and, among others, “Wish Brian Sims mother had aborted him.” Some wore shirts emblazoned with the slogan “Make Unborn Babies Great Again.”

There were also several Make America Great Again hats, a “Trump 2020: No More Bulls***” flag and a who’s who of right-wing commentators ranging from Jack Posobiec and event co-organizer Matt Walsh to Kaitlin Bennett of InfoWars and Graham Allen.

“Our movement and cause is much bigger now. We don’t cower to bullies and harassment.” – Lila Rose

Allen, who hosts the “Dear America with Graham Allen” podcast, explained what brought him to a rally/protest, which kicked off with a group rendition of “God Bless America” and a vociferous “USA! USA! USA!” chant.

“As much as Brian Sims sparked something with his videos, it’s not entirely about him,” Allen said. “There is an attack on unborn children, and we have to stand up as the current generation to secure a future for the next generations.”

Among the first speakers, Lila Rose, president and founder of the anti-abortion group Live Action, told those gathered that it was all about “standing up for life” and noted that they’d invited Sims to attend, which he did not, and loved him despite his “sexist, racist” comments captured during the video.

“Our movement and cause is much bigger now,” she said of the support galvanized in recent days, a statement that prompted a “Resign Now” chant from the crowd. “We don’t cower to bullies and harassment.”

Other speakers – ranging from former Planned Parenthood Director Abby Johnson and Dr. Monique Ruberu (an OB-GYN and Sidewalk Servants leader) to Walsh and Garecht – also hoped the large turnout would translate into more protesters returning to Planned Parenthood locations in the future to be heard.

Johnson said that the ultimate goal should be to ensure that “clinics like this no longer exist.” 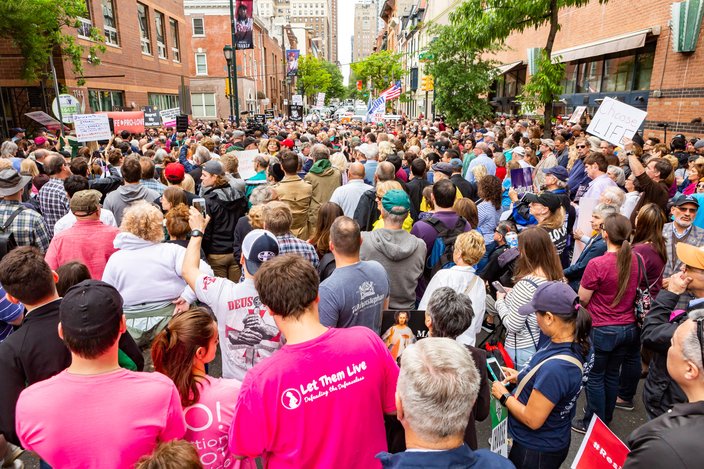 Hundreds attended the Pro-Life Rally Against Bullying outside the Planned Parenthood - Elizabeth Blackwell Health Center on Locust Street in Center City, Friday, May 10, 2019.

Big-picture politics weren’t on Ashley Garecht’s mind when she spoke to PhillyVoice after the event had ended around noon. After all, the videos weren’t a political talking point to her, her husband or her 13- and 15-year-old daughters.

Instead, it’s a visual record of the moment of their encounter with Sims, and one that seems to have taken on greater impact. They’ve also seen nearly $120,000 raised via GoFundMe to “Show Brian Sims the Power of the Pro-Life Movement.”

Still, the teens didn’t attend Friday’s rally and protest because, in the words of one organizer, they feared for their safety.

“We’ve seen such an outpouring of support this week, and it means so much to us,” Garecht said. “They have so many friends praying for them. We’re so proud of how they’ve stayed strong after what happened that day. We're so thankful that so many people took time out of their work day today to come support this.”