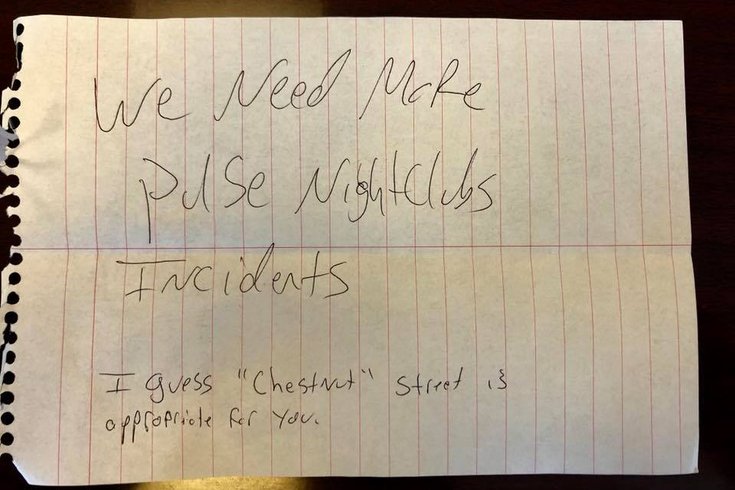 The Democratic lawmaker from Philadelphia, who has been the center of some controversial and national media attention lately, shared the letter to his Facebook page on Tuesday.

The letter contains a number of homophobic slurs and phrases. Sims is Pennsylvania's first openly gay lawmaker. He made headlines earlier this month when he welcomed Vice President Mike Pence for a Philadelphia visit by posting a photo of himself giving the middle finger.

One of the last lines of the letter Sims received reads, "You will rot in hell, maybe sooner rather than later." On the back of the letter, the person wrote, "We need more Pulse Nightclubs," a reference to the massacre in Orlando, Florida, two years ago when 49 people were fatally shot at an LGBTQ nightclub.

The back of the letter continues: "I guess 'Chestnut' Street is appropriate for you," a reference to the street that runs through Center City Philadelphia and the city's Gayborhood. Sims also posted an image of the envelope that showed "retired USA sniper" had been written on it.

In response to the letter, Sims shared the following message on Facebook:

‪DEAR BIGOTS: When my Office gets letters like this, I’m reminded of today’s Marriage Equality anniversary and of last night’s Democratic National Committee #LGBTQ Gala.

My PRIDE in being a member of the lesbian, gay, bisexual, transgender, and queer communities is so much greater than any nastiness or aggression you’ll ever send my way because of it. This is a battle you can’t win.

My communities are stronger than you, more resilient than you, and have more reasons than ever before to FIGHT for our country!

Elected in 2012, Sims has frequently used social media as a means to promote his views and on occasion call out bigoted internet trolls.