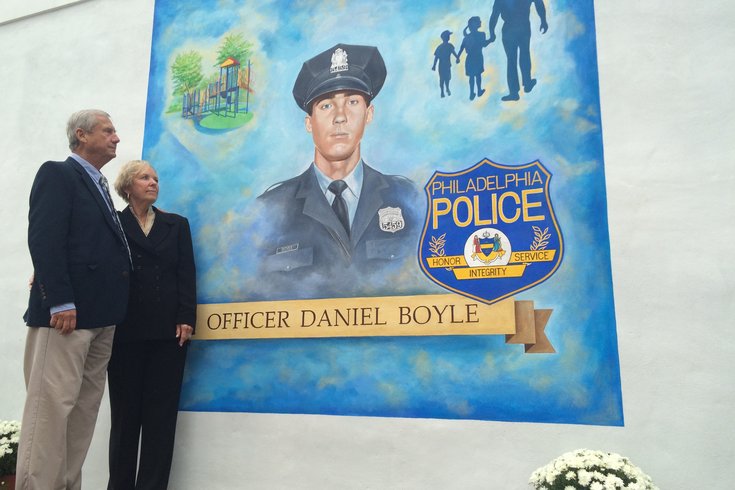 Patrick and Nancy Boyle, parents of fallen Philadelphia Police officer Daniel Boyle, pose with the mural to their son's memory. The new mural was unveiled on Wednesday.

Boyle died at the age of 21 in February 1991 when he was shot by a suspect who was driving a stolen car. Now, 24 years after his end of watch, the Northeast Philadelphia recreation center that bares his name displays a mural of the officer who died in the line of duty.

Painted by artist Greg Packer - along with help from area resident, Moira Regan, 30 – the mural is now in place on the side of the Daniel Boyle Memorial Recreation Center at 13024 Stevens Road in Somerton.

"I can come by here and see his face on that building and remember his service to the city of Philadelphia," said Patrick Boyle, the officer's father. "It's a wonderful tribute."

According to George Geiss, recreation leader for the Daniel Boyle Memorial Playground, the time had come for a new mural at the rec center. The old one, he said, was warped and worn and the staff wanted to have a mural that helped honor and remember the center's namesake.

"When we do something, it's for Danny Boyle," Geiss said. "We don't do anything without keeping him and his legacy in mind." 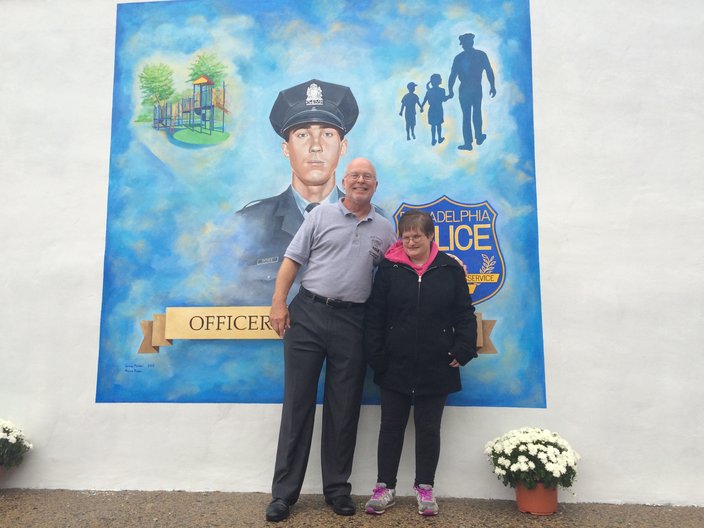 Weiss said he contacted his friend, Packer, who offered to do the mural on two conditions – the work would be done at no cost and Packer wanted to get help from a local resident. And, Marylou Regan said, her daughter, Moira, was happy to help out.

"We live across the street and she volunteered," said Marylou.

It took a little more than a month to paint the piece, said Packer, who sketched the design for the mural by hand before enlarging it to put it on the rec center's wall.

The artist said he hoped the community enjoys the piece and sees it as a tribute to Boyle and the life he gave to protect the city of Philadelphia.

"It means so much more than a normal work of art for me," said Packer, as he choked back a tear. "I applied pressure to myself for this, but it was good pressure ... I just hope people will get something good out of it."

At the unveiling, The Danny Boyle Scholarship Fund delivered $7,000 to St. Veronica Independence Mission School at 3521 6th St. in North Philadelphia. According to Patrick Boyle, the funds will be used to help offset the cost of tuition at the private school for incoming students in need of financial assistance.