Poll: New Jersey support for legal weed higher than ever

A recent poll from Farleigh Dickerson University shows that while New Jersey residents are nearly evenly split on the issue of legalized marijuana, support for recreational use of the drug has never been higher.

The poll, conducted between June 15-21, found that 48 percent of those surveyed supported legalizing small amounts of marijuana for personal use while 45 percent opposed it.

That's quite a shift from just a year and a half ago. In January 2014, 51 percent opposed it while 41 percent were in favor of legalization. 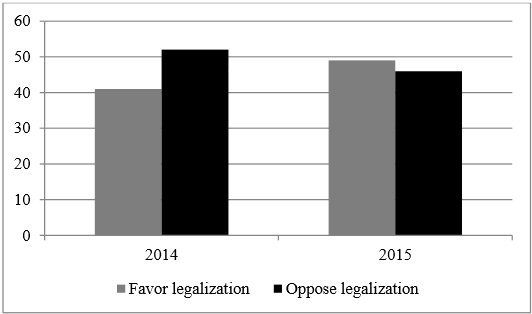 Those June numbers show a significant split in opinion when it comes to gender and race. Of those polled, 57 percent of men were in favor compared to just 39 percent of women. Also, a larger portion of white respondents (53 percent) favored legalization than non-white respondents (37 percent).

New Jersey is one of 23 states (plus Washington D.C.) where medical marijuana is legal. However that legal status, as well as these recent poll numbers, do not gel with recent comments from the state's governor.

Chris Christie, who is on the campaign trail seeking the Republican nomination for president in 2016, has denounced legalized pot during recent media appearances.

At a town hall event in Iowa Wednesday, he said he would enforce federal law on the drug as president, and had a warning for pot smokers in states where it was legal. From Wired:

“I believe it should still be illegal. If you’re getting high in Colorado today, enjoy it until January 2017, because I will enforce the federal laws against marijuana as President of the United States.”

According to Real Clear Politics' most recent poll aggregation, Christie sits in 10th place among Republican hopefuls with three percent, which would just qualify him for a coveted spot in the primetime Republican primary debate on Thursday, August 6 (a second, earlier debate has been scheduled by FOX for candidates outside the top 10).

.@GovChristie: “I’m POTUS, all the federal laws that are on the books are gonna be enforced." #OReillyFactor pic.twitter.com/xagnjKr5Zz

The Fairleigh Dickinson University PublicMind poll surveyed 792 self-identified registered voters and had a margin of error of 3.7 percentage points.