Most Philadelphians may think that the city is on the right track, but that doesn't mean there aren't concerns. A recent poll revealed that residents believe public safety is the biggest issue facing the city.

Pew Charitable Trusts released its latest findings Tuesday that showed the most common worry among city residents is crime and law enforcement.

In August, residents were asked to name the most important problem facing the city. Forty-four percent of respondents identified public safety as their top concern followed by education (20 percent) and jobs/economy (14).

That's a stark contrast to last year's results. However, that poll could have been skewed by the mayoral election. In 2015, residents were asked to name the most important issue facing the city and the new mayor. Nearly a third of respondents (32 percent) singled out education over public safety (23) and jobs/economy (22) in that poll. 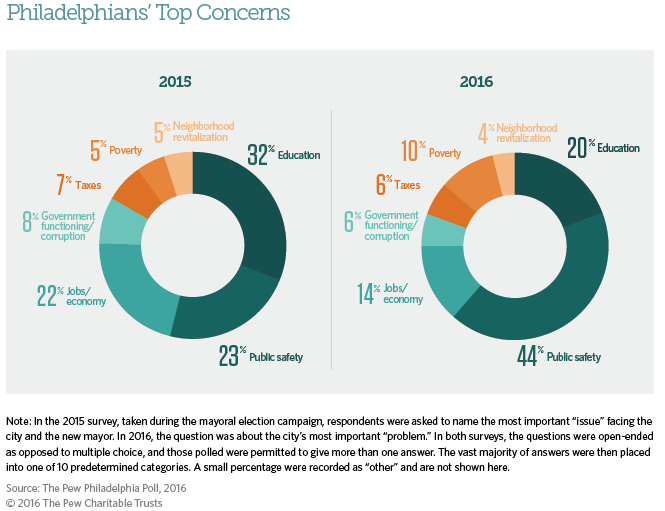 The survey also examined public opinion on Philly's "sanctuary city" status. The controversial policy has been the focus of not only local politicians but also the state legislature. On Monday, a bill that would punish Philly for refusing to cooperate with federal immigration officials passed in the Pennsylvania House of Representatives by a significant margin.

But what does public opinion say about the issue?

A majority of city residents oppose the bill, according to the poll. Fifty-eight percent of respondents want Philly to be a "sanctuary city" while 38 percent disagree.

Finally, residents were asked about their opinion of the local police. As a whole, Philadelphians have a positive outlook, 72 percent of respondents have a "great deal" or a "good amount" of respect for officers compared to 27 percent who have "just some" or "not much at all."

When the numbers are broken down by race, however, a disparity is revealed. Among white respondents, 86 percent said they respected police officers while 60 percent of both black and Hispanic respondents said the same.

The poll was conducted in August when 1,640 city residents who were at least 18 years old were contacted via telephone interviews. The sample was weighted to match the city's demographics from the American Community Survey of the U.S. Census Bureau, including gender, education, income, race and ethnicity.