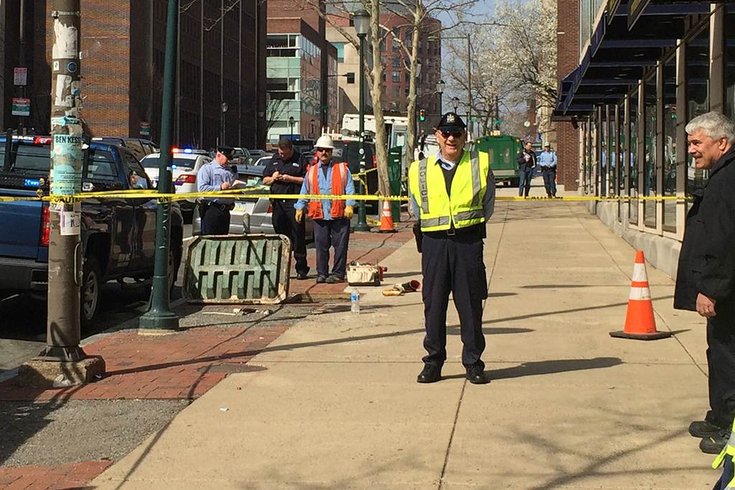 Police officers and a technician work at the scene of an underground transformer explosion at 34th and Walnut streets in University City.

An underground transformer exploded Thursday morning in the vicinity of 34th and Walnut streets in University City, police said.

According to Jeff Chrusch, a police spokesperson, at about 10:05 a.m., an underground electrical transformer exploded, causing a metal access panel on the sidewalk above to blow open.

The University of Pennsylvania sent out an alert warning of police activity in the area in the morning.

Ed Kiggins, an employee of nearby University of Pennsylvania, said he heard the panel blow open, but, when asked if the blast made him think of the recent tragedy in Brussels, Belgium, he said no, because it didn't sound like an explosion.

Instead, he said, it sounded "metallic," like a loud noise emitting from a construction site.

"It sounded like a metallic bang, like something fell off of a building at a construction site," said Kiggins. "I just thought it was construction related."

As of about 11 a.m., the intersection was open to vehicle traffic, however, the sidewalk closest to the open panel was closed to foot traffic.