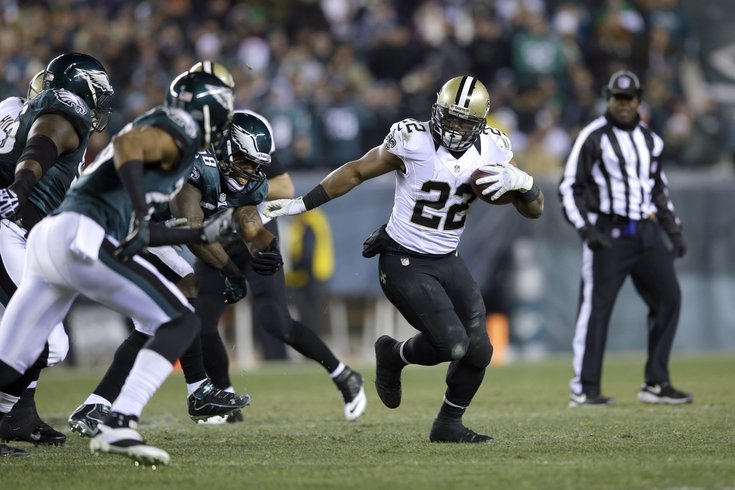 Remember when Mark Ingram and the Saints ran all over the Eagles in the playoffs?

After shipping LeSean McCoy off to Buffalo for ILB Kiko Alonso, the Eagles suddenly find themselves in need of bodies at running back. Darren Sproles is a weapon, but is not a three-down back that can carry the ball 15+ times per game, and Chris Polk can't be trusted to stay healthy.

As it turns out, the 2015 draft class is extremely strong at the running back position, as we pointed out when we profiled 15 of them during our NFL Combine previews. However, the Eagles probably can't wait until the draft to go after running backs to fill the void left by trading McCoy. Expect them to be shopping for runners in free agency. Here are a few players who make sense:

Marcus Mariota isn't the only Heisman Trophy winner the Eagles are linked to this offseason. A report surfaced Tuesday from Lyons Yellin of WWL-TV/Gannett Louisiana that the Eagles are interested in Mark Ingram.

I've heard rumblings about the Eagles being interested in Mark Ingram, with today's trade those now make a whole lot more sense.

As a side note, "Lyons Yellin" is an outstanding name, so kudos to you, sir.

The Saints would like to keep Ingram. Unfortunately for them, they're going to be helpless little lambs during this free agency period, as their cap situation is an utter mess. Here are the bottom five teams in the NFL in cap space, via overthecap.com. (Note: Teams in the red are over the cap):

After being drafted in the first round and starting slowly in his first three years in the NFL, Ingram had somewhat of a breakout season in 2014  His numbers:

He's a little bit like the Saints version of Brandon Graham, in that the Saints are unlikely to retain him after he finally began to show some promise.

Chip Kelly saw Ingram up close in the 2013 playoffs, when he ran for 97 yards and a TD on 18 carries (5.4 YPC). Here's a quick highlight reel of Ingram, with a handful of runs against the Eagles in that playoff game:

The Eagles reportedly tried to trade for Spiller last offseason, but the Bills weren't interested in letting him go, per Geoff Mosher of CSN Philly:

Before they traded for Darren Sproles, the Eagles first tried to add a younger, more dynamic weapon to their offense.

The Eagles contacted the Bills this offseason with hopes of trading for versatile Pro Bowl running back C.J. Spiller, according to two league sources familiar with the situation. The Bills weren’t interested in moving Spiller, both sources said, and talks never heightened into an offer

After the Bills traded for McCoy, they said "See ya!" to Spiller, who was actually at NFL Network's studios when he learned of the McCoy trade:

“[McGinest] walked in and said, ‘Did ya’ll hear that Kiko’s getting traded to the Eagles for Shady?’ ” Spiller said. “And to me, I thought he was joking, like just trying to play a joke on me, because he’s a Patriot, and I was a former Bill.

“But then, he put it on TV, and I seen it, and then probably about five minutes later, management called me and told me that they (were) going in that direction, and pretty much giving me a ‘Thank you for your services.’ ”

Spiller is a shifty, versatile back with return skills in the same mold as Sproles, but younger (he turns 28 in August) and bigger. On his appearance in his segment on NFL Network, Spiller said he'd be interested in playing for the Eagles:

"I've never been in that type of system before," referring to the Eagles' hyped offensive attack, "but I don't think I'd have any problem adjusting to it."

So... Spiller has interest, and the Eagles had interest. But would the Eagles still have interest with Sproles in place? My sense is that the Eagles would like to add a north-south hammer as opposed to doubling down another shifty guy, but we'll see. Here are highlights from the 2012-2013 seasons. Note his speed:

According to Tom Pelissero of USA Today, "all indications are he wouldn't consider a pay cut." Peterson would reportedly be open to restructuring his contract to facilitate a trade, and he noted five teams with whom he would be agreeable to do so. They are the Cowboys, Colts, Chargers, Cardinals, and the Buccaneers. Of course, Peterson made his list before the Eagles traded LeSean McCoy.

Peterson turns 30 in May and has some mileage on him, but he'll be fresh after missing 15 games in 2015 due to his legal troubles.

Obviously, the Eagles just traded an elite back because his cap figure was almost $12 million. Teams around the league could be wary of trading for Peterson for that exact same reason. But if he were to be released, imagine tired defenses trying to tackle this dude in Chip Kelly's up-tempo offense. (You can skip to the highlights at 2:30. Also, note the worst rap ever in the background).