Practice notes: Sixers working to drill offense with James Harden on board 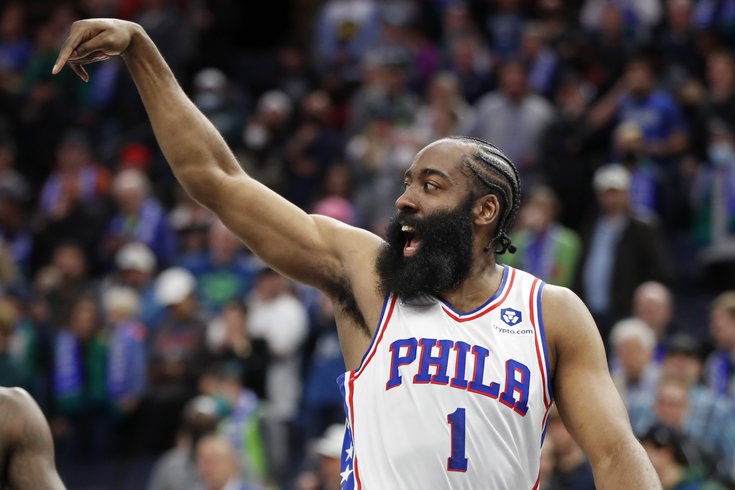 Philadelphia 76ers guard James Harden (1) celebrates a play by his team against the Minnesota Timberwolves at Target Center.

The Sixers' offense with James Harden on board has been nothing short of spectacular. Fit concerns with Joel Embiid have looked silly after just two games, and Harden's playmaking has been as dangerous as his scoring, with Harden embracing the point guard role and orchestrating from the point of attack.

Here's the scary part — the Sixers still believe they can get better, or more diverse at the very least. And Tuesday's practice session was a rare opportunity to get everybody together and get the new guys up to speed, preparing for a tough run down the stretch.

"We did a lot of skeleton work," Doc Rivers said Tuesday. "Boring, hard, monotonous. It's just a tough one, it's not usually what guys want to do all practice. But because we don't really know a lot of our stuff, defensively and offensively, we took full advantage today. One day isn't going to matter — well it is going to matter, but it's not going to change anything overnight."

The problem at the moment, Rivers says, is not that the offense isn't working, because anyone with eyes or access to a box score can see what's unfolding in front of their eyes. At the moment, the concern is what happens when their first option gets taken away, and how the Sixers can react from there.

Frankly, when you have two players who are as good in isolation as Harden and Joel Embiid are, those concerns dwindle quite a bit, because either player can bail you out of a tough possession when things collapse. But Rivers and the Sixers have the end game in mind, the part of the season where your route one offense won't always or often be good enough.

"We went all the way through each option of each play, explained everything we're looking for, where we're trying to get the ball," Rivers said Tuesday. "We put a ton of time on where to cut, where to space, where to be, and that's slow and boring, but it's stuff you have to do."

Two-game samples don't mean a lot in the grand scheme of things, but the numbers have been overwhelming for this group that Rivers believes still has work to do. Philadelphia outscored the Knicks and Timberwolves by 43.1 points per 100 possessions with Embiid and Harden on the floor at the same time. Even with healthy regression on both offense and defense, it's the sort of punch they need their top lineups to be capable of in order to hang with other contenders when it counts.

With the top lineups firing on all cylinders, a lot of the focus right now is directed toward lineups with Harden running things solo, Embiid parked on the bench for his mid-half rest. There's good reason for that — gifted as Harden might be on offense, he lacks the continuity with his teammates that Embiid has in spades.

Rivers is quite comfortable throwing Embiid out there with almost any assortment of bench players at this point in the year, with the MVP-favorite proving capable of carrying different types of units. His growth as a playmaker, his defensive presence at the rim, and his individual scoring ability allow him to push aside any concerns for a lineup even if they lack punch outside of the big man. These guys all know how to play off of him, which can't be said for Harden.

Harden isn't exactly struggling to bridge that gap quickly, of course. Some of his new teammates in Philadelphia are guys who have gone to battle with him over years and years, in both repeated regular-season meetings and even at the highest level in the playoffs. Georges Niang, who has some overlapping time with Harden in second-unit lineups, thinks there's much more to Harden's game than most people even see at first glance.

"He's just timing you up to use your strengths against you. It's amazing that I get to see it every day because when we were playing against him it was like hey, this is a pain in the ass."

Even as Harden and Embiid come back to Earth a little bit — assuming they do, anyway — there should be some hope in the fact that one of their entrenched starters has struggled mightily out of the gate. Tobias Harris has had a down year after making a run at an All-Star selection last season, and Harden has created a bevy of open jumpers for him through two games, makable shots Harris simply hasn't cashed in on. Those two will be an important pairing for the Sixers, as it appears Rivers' first instinct has been to line Harris with Harden and Embiid with second-year guard Tyrese Maxey in the rotation.

However you feel about Harris, his contract, and his play this year, he has the versatility to playoff off of Harden in interesting ways with the second unit. Using Harris in a 1-4 ballscreen has led to a lot of open catch-and-shoot opportunities for Harris, a byproduct of the attention Harden faces turning the corner. Harris believes the makes will come with time, and he has not/is not sweating his touches or efficiency, at least not publicly.

"I think my looks are good. Obviously, would like to make every single shot, but with time, I'll begin to see where these looks are coming from through the course of the game, and see where I can impose my will at times as well. But the ball is going to flow how it flows, and I got to just be ready for whatever opportunity comes my way and be okay with that. And I am, I'm fine with that.

"I'm not worried about offensive points and production. Everyone has this notion of you got to score this many points or that, I get it, but at the end of the day, I'm a winner and I incorporate to winning basketball. If that is me taking 15 shots, if that's me taking eight shots, it is what it is. As long as we're winning basketball games, that's what the name of the game is about...we have a lot of firepower, especially with James and Joel on the team."

Philadelphia will get its first chance to host the Harden and Embiid show on Wednesday night, in their second meeting of the week with the Knicks. It's the start of a tough run of games for the Sixers, who have the Cavs and Heat in a back-to-back this weekend followed by games against the Bulls and Brooklyn Nets, the last of which is expected to be a monumental event as a result of the Harden/Simmons trade.

Everyone on the roster sounds excited about the first opportunity for this new group to suit up in front of the home fans.

"It's great, the city's excited, we're excited, it'll be great for James and great for the team," Rivers said Tuesday. "But end of the day, it's a competition, and that's what we're going to show up for."