Protesters against U.S. airstrikes on Syria gather in Center City 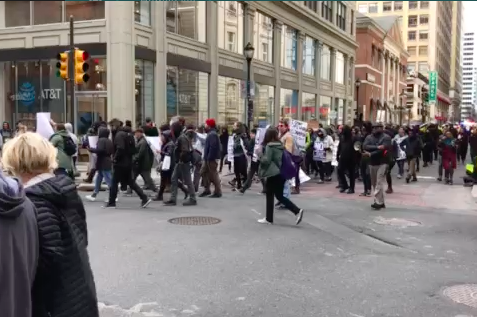 A group of protesters gathered in Center City on Friday evening to show opposition to the United States' overnight missile strikes on a Syrian air base.

CBS3 reported Friday that at least 20 protesters gathered at City Hall, but video from PhillyVoice taken shortly before 6 p.m. show more than 40 marching up 15th Street before turning onto Walnut Street.

The group shouted phrases like, "When Syria is under attack, what do we do? Stand up, fight back."

Protesters also held up signs that said "Stop Wars Against Black and Brown People," "Bombs Are Not the Answer," and "U.S. Out of the Middle East."

"It is the duty of those living in the belly of the beast, in the U.S., to unequivocally demand imperialist forces leave Syria," the group said on the Facebook event page. "We have to combat bourgeois propaganda until our vocal cords are worn. The same media that justify the police lynchings of Black children in the U.S. are using the deaths of Syrian children to justify war."

Protesters Gather In Philly In Opposition To US Airstrikes On Syriahttps://t.co/KOFZ0UgYle pic.twitter.com/7orhXhxaqW

The decision from the U.S. to launch the missiles came after a chemical attack in Syria killed 87 people, including 31 children this week.

Similar protests against the airstrikes have reportedly been planned across the country. Dr. Khaldoun Makhoul, a Syrian-born physician who immigrated to the U.S. more than 20 years ago, organized a large rally in Allentown Friday, the Associated Press reported.

The Philadelphia police did not respond to an immediate request for comment. CBS3 reported Friday that no protest permits were filed with the city Friday.

SEPTA tweeted around 6:30 p.m. that a moving demonstration at 16th and Market streets may impact bus routes.

BUS: A moving demonstration is taking place at 16th & Market streets in Center City and may impact routes in the area.

This article is developing. Check back for updates.