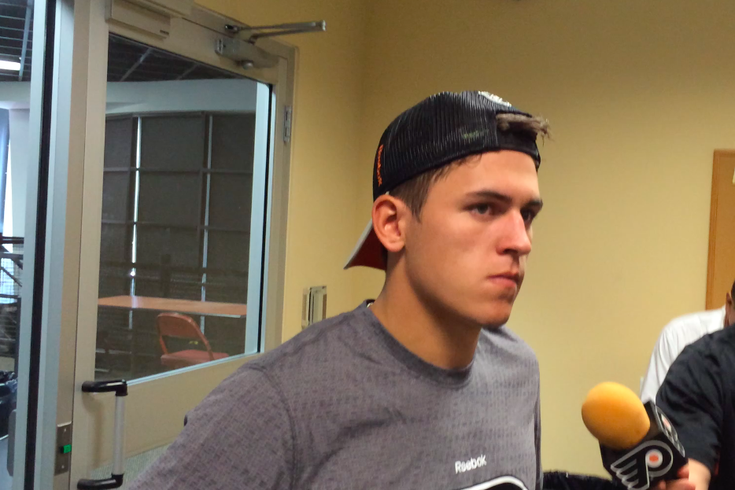 On the opening day of Flyers rookie camp, Dave Hakstol wouldn’t single out any individuals who had impressed him during the two-hour on-ice session. That’s not his nature, anyway.

And yet when the second-year Flyers coach was asked about the team’s top forward prospect, he couldn’t help but compliment him.

“I liked his practice today,” Hakstol said of Travis Konecny. “I thought he’s a guy that does things with pace, he’s got some pop to this game. That being said, it’s a matter of earning things day by day.”

“It doesn’t matter where you are. It doesn’t slow you down or make you do certain things or cheat on the ice. You can choose the way to want to play and I definitely play hard.”

Whether it’s Hakstol or general manager Ron Hextall talking, “earn” seems to be the operative word when it comes to a youngster potentially making the 23-man roster out of training camp. A tie will likely go to the veteran, so the burden is on the prospects to seize a roster spot with their play in camp and the preseason.

If the 19-year-old Konecny, recently ranked the No. 22 overall prospect in hockey by ESPN Insider, does end up breaking camp with the team next month, it could be because he feels more confident after going through the process last season.

“Last year was a lot of getting my feet wet and feeling out the speed of the pro guys, but this year I feel confident coming in here,” Konecny said. “It’s a different vibe for me. I’m looking to make the team and give it the best shot I can so I’m just trying to stay calm and do things to the best of my ability.”

If Konecny truly does have more confidence, Hextall and the front office might have a difficult decision to make in a few weeks. In a couple of 2015 preseason games, he turned more than a few heads with his skating and playmaking ability.

Konecny said that Hextall and the front office wanted to see him add weight to his small-ish frame (5’10”, 185 pounds) this summer. He was clear about focusing on sticking with the Flyers, but like Hextall made clear in the summer, there are things he can accomplish back in Sarnia and the Ontario Hockey League.

“It doesn’t matter where you are,” Konecny said. “It doesn’t slow you down or make you do certain things or cheat on the ice. You can choose the way to want to play and I definitely play hard.”

Looking at all of the veteran forwards that the Flyers have under contract, the conventional wisdom suggests that Ivan Provorov, the Flyers’ other top prospect, has a better chance of finding a spot on the blue line than Konecny up front.

Provorov went back to Russia to work out for six weeks after development camp in the summer and, like Konecny, he’s focused on staying in Philadelphia.

“Offseason is nice for a bit but then you want to get playing again,” Provorov said. “It’s the beginning of the season, I’m real excited. And hopefully I can do great and make the team.”

Making the Flyers would represent the end of an incredible journey for Provorov. As a Russian teenager, he came over to America and played for the Wilkes-Barre Knights in 2011-12. After two years in the Poconos, Provorov went to Cedar Rapids before heading to his current spot in Manitoba with the Brandon Wheat Kings. 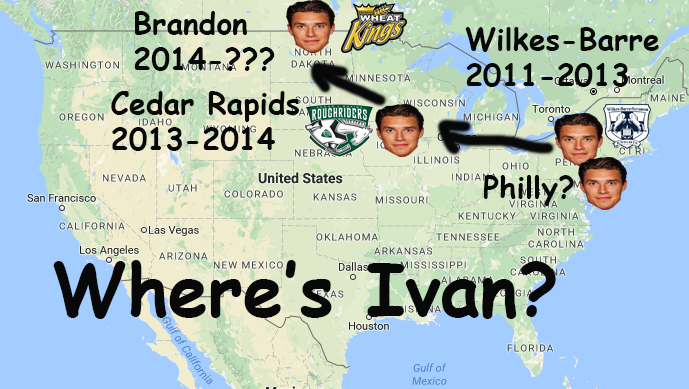 If he were able to make the team in the next month, Provorov would have the chance to settle down in one place for the first time since he left Russia.

“It’s been a long journey, but now I’m just taking it one day at a time,” Provorov said. “And hopefully I can make the team.”

Even if Provorov has a decent chance, he’ll still have to earn it.