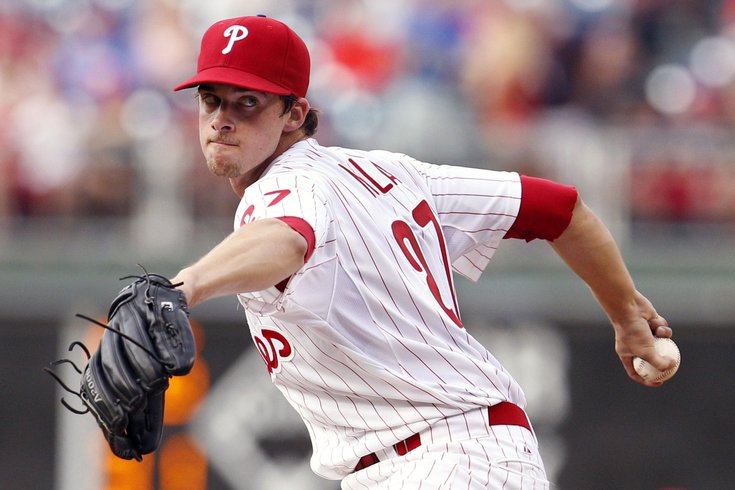 Aaron Nola will look to take the momentum the Phillies gained in New York this weekend – and that the starting pitching has had since Opening Day – into the Phillies home opener at Citizens Bank Park on Monday afternoon.

The Phillies rebuild is 16 months old now and the fruits of their labor of losing (higher draft picks, prospects acquired through trades) will be on display this spring.

A week from Wednesday, Jake Thompson, Vincent Velasquez, Mark Appel, Jimmy Cordero, Andrew Knapp and Jorge Alfaro will be among the pitchers and catchers reporting to Clearwater, Fla. None of those guys are locks to be on the roster on April 4 in Cincinnati, though.

Another product of the rebuild is a sure thing for the Opening Day roster: Aaron Nola.

The 2014 first-round pick made his big league debut in July and didn't skip a beat in jumping from the minors to the major leagues. Nola, 22, went 6-2 with a 3.59 ERA in 13 starts with the Phillies. He allowed one or zero runs in six of those 13 starts and allowed more than three runs in just three of those games.

Last month, PhillyVoice caught up with the rising Phillies righthander for the second edition of The Q&A.

What’s the one thing you think you need to improve on to take the next step to where you want to be as an established, big-league pitcher?

Aaron Nola: I feel like my other pitch, my changeup. I’ve been working on that a lot this offseason and I feel like if I continue working on it I can get it solidly into my repertoire.

Any personal goals or milestones for this year? Wins, ERA?

My biggest goal is just to stay healthy all year.

As many as I can - just try not to miss a start.

You have a goatee now and I have to admit you look exactly like your brother (Marlins infield prospect Austin Nola.)

Aw, man. [As if insulted]. Funny story - Kenny Giles this past year looked on the Jumbotron and that was my picture, from when I first took one at spring training, all shaved. He looked up at it and he said, “Don’t take that picture again, grow some facial hair.” [Laughs]

Your brother played at (Triple-A) New Orleans last year. Jealous of him being so close to home, with family and friends at games all the time?

Yes and no. But, I’m really happy for him. I’m hoping he makes the team out of spring training this year. But it was definitely a cool thing for my family, him being so close to home.

How would you attack an at-bat against your brother?

Is a hot dog a sandwich?

I don’t think it is a sandwich.

Isn’t it more like a taco, since the outside bread part folds over, and isn’t two separate pieces?

If you want it to be a sandwich I feel like just cut the dog up and put other sandwich stuff in there.

I have plenty of favorites foods. A lot of southern foods: gumbo, crawfish, crabs. I’m a sucker for ribeye steaks, too.

@Phillies @AaronNola10 how much crawfish you eat this offseason? #BackInTown

This placed called Palladino’s, an Italian restaurant. I got a ribeye steak from there last night.

What do you like best about Philly, anything particular stick out?

I haven’t really got a chance to explore the city too, too much. But the time I have, it’s unique. It’s an old city and I feel like I can see the history while walking around. And, obviously, we also know the fans are historic - and great. 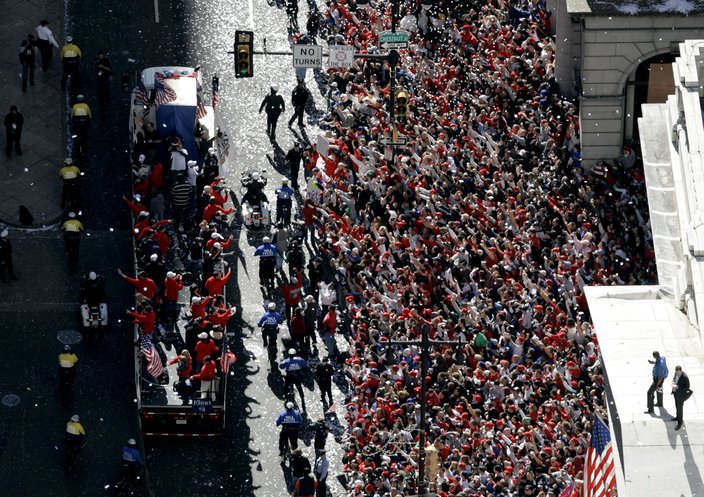 Hundreds of thousands of Phillies fans flooded into Center City to celebrate the World Series championship on Halloween afternoon in 2008. (AP Photo/Jacqueline Larma)

This team has really filled up on prospects in the last year or so. Anyone, in particular, you’re excited about seeing?

All of them. All of them. I know the guys that we traded for this past year that went to Reading (Nick Williams, Jake Thompson, Nick Pivetta) I followed them a little bit since I played with that team (earlier in the year) and I was close to them. And they looked good. That whole team looked good. And the guys we’ve traded for since look good, too. I think not just with the Phillies, but throughout our organization, we have a lot of great talent.

Do you have any history with Mark Appel, him at Stanford, you at LSU?

We don’t have any history. My brother played with him in the Arizona Fall League and I got to talk with him at the Futures Game a little bit. … We were in college at the same time but we never crossed paths.

Who was the best player in college football last year?

What happened to LSU (No.2 in the country the first week of November to a three-game losing streak in the same month)?

It happens, you know. It happens in football. Just like in baseball. You never know. But we’ll be back strong next year.

You're from Baton Rouge, obviously. How many games do you go to a year?

How far do you live from Death Valley?

Two minutes. I try to go to as many as I can.

Do you have any pets?

"Unbroken." It was great, incredible.

Remember the…. uh…. either Remember the Titans or that newer movie that came our last year or two years ago. I forget what it’s called.

If you could copy anyone’s career, who would it be?

I don’t know. I don’t think I would copy. I want to do my own thing and do the best I can.

Do you want to get the assignment to start on Opening Day in Cincinnati on April 4th?

Of course I do. But we have a lot of quality arms. I’m still young.