On his near-death anniversary, a writer shares queries he'd like to ask the living 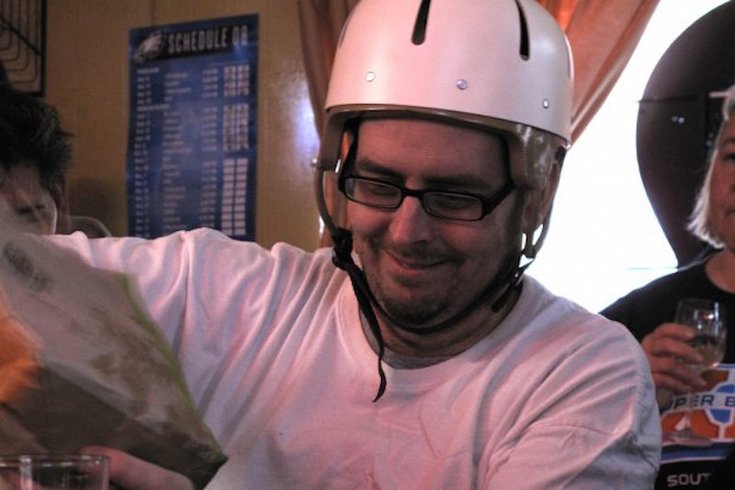 The author, shown here at a 2009 benefit, had to wear a helmet for six months after being struck by a car to protect his brain since portions of his skull had been removed to reduce swelling.

It’s Black Friday, or – as I like to call it – Day I Almost Died-iversary. Rather than revisiting those details – as I, and others, have on numerous occasions in the past – this year calls for a different approach.

Being alive, and being a writer, has enabled me to ask many questions of many people. But there are some questions I haven’t yet had the chance to ask some people. Therein lies the point of this post.

In pursuit of answers to some of Philly life’s greatest mysteries, what follows are the queries I’d like to pose to the living that have gone unanswered – or at least have remained under a veil of mystery/secrecy/uncertainty – for years.

It’s up to them whether they want to answer, though I’d totally appreciate it if they did.

Without further ado, here they are:

1. To Donovan McNabb: Though some teammates – i.e. Lito Sheppard – say you did, you deny puking during the fourth quarter of Super Bowl XXXIX. Tell the truth: You totally puked, right? Don’t be shy. That’s not why the team lost; the Patriots totally cheated you out of the title.

2. To the mysterious Toynbee Tiles installation artist: Who are you? What inspires your work? Yes, it seems like you’ve moved on, and the tiles are gradually eroding into yesteryear, yet your work still stokes wonderment in Philly. It is time for you to come forward!

3. To City Commissioner Anthony Clark: My man, I know you hear all the uproar about your non-show job. Seriously, what gives? What do you do all day when you’re supposed to be doing city commissioner-type things? Are you at all surprised that you keep getting elected? Is there anything you consider unethical, or nah?

4. To the Philadelphia Inquirer: What do journalistic ethics say about building up a contest-submission stack of stories about illegal leaks based on a whole lot of questionable leaks coming from a web that involves a sister paper, reporters who work in-house and sources who have much to gain from said coverage? And how, pray tell, does that deviate from your ethics about said scenario?

5. To the Daily News: How bad does it suck to have to justify paying Christine Flowers to write boilerplate #tcot-rally talking points while laying off quality writers and editors?

6. To retired NFL wide receiver Marvin Harrison: Did you kill Dwight Dixon or have anything to do with his death? What would you say to, oh, a lot of people who think the district attorney's investigation into this matter got sandbagged in a fashion that worked out to your benefit? 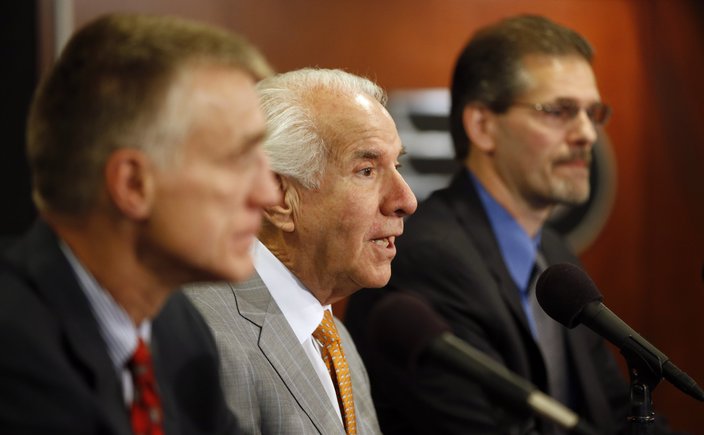 7. To Flyers boss Ed Snider: Why was Pelle Lindbergh allowed to drive away from a club at the team’s practice facility the night that he crashed his Porsche into a South Jersey wall and sustained the injuries that would take his life several days later? How has the team culture changed in the past 30 years to prevent this from happening to someone else?

8. To Tenika Watson: What really happened the night Teddy Pendergrass crashed his car on Lincoln Drive and was left paralyzed? Why should I believe the version you offered last year?

9. To WIP Operations Manager Andy Bloom: Why do you hate Philadelphia so much that you hired someone like Josh Innes to poison our airwaves with irrelevant chatter set to the background noise of Spike "Nepotism Prince of Philadelphia" Eskin’s Salacious Crumb impersonation? It’s not even a Stern-show knockoff; it’s a knockoff of a Stern-show knockoff. It’s bad, no matter what your lowest-common-denominator ratings numbers say, and you bring everybody else at the station down by allowing it to continue.

10. To W. Wilson Goode Sr.: Did you come to find out in later days, months or years that your predecessor Frank Rizzo was actually trying to reach you on May 13, 1985, to warn you that he thought late Commissioner Gregore Sambor might be wrong-minded enough to “let the fire burn”? 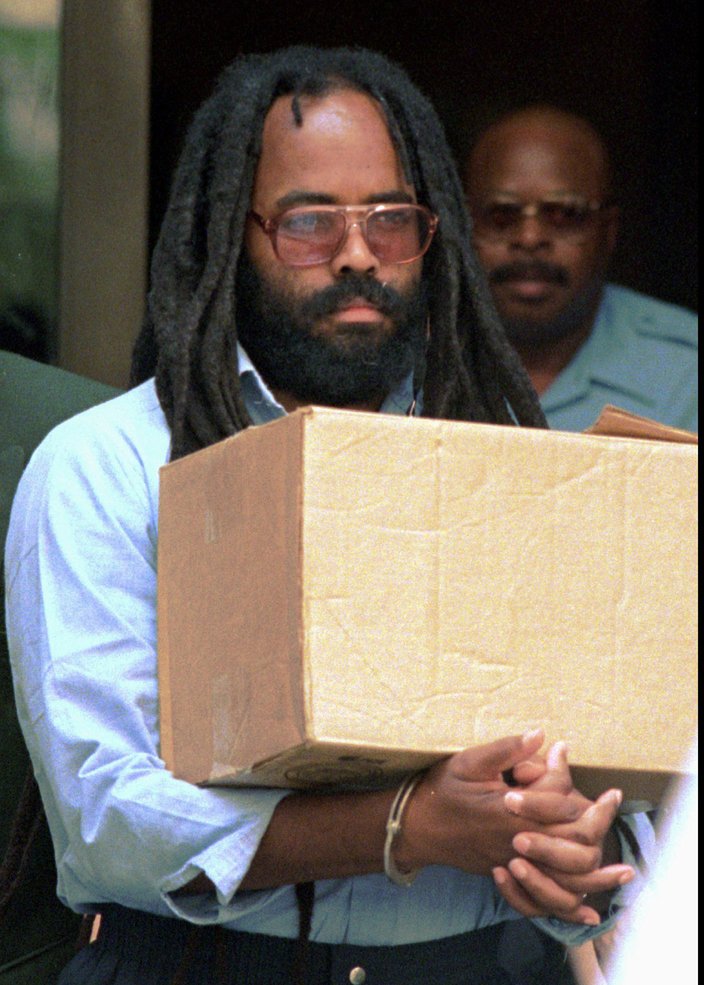 11. Grab-Bag Round! (Or, questions that people on Facebook and Twitter suggested be asked; special S/O to @longenhagen and @the700level for suggestions that already appeared): To the U.S. Navy or other top-secret insiders: Why don’t you just go ahead and tell us everything about the Philadelphia Experiment? To anybody who knows: What happened to Richard Petrone Jr. and Danielle Imbo? To radio host Howard Eskin: Were you really just being a nice guy when you sent those flowers? To Eric Lindros: Did you sleep with Rod Brind’Amour’s wife? To the SS United States: How did you con us into allowing you to berth here and rust out on the waterfront for the past couple decades? To the unknown tagger who leaves “God Lives” on every underpass: Who are you? To an unknown source of civic pride/embarrassment: Who threw the first snowball at Santa? To some bicyclists: Why do you ride ON Kelly Drive when there’s a perfectly fine bike lane available for your use? To the Philadelphia Parking Authority: What happened to your hearts? To outsiders like Ed Asner: Why do you think Mumia Abu-Jamal is innocent? To Abu-Jamal: Why did you kill Daniel Faulkner? To Emanuel Freeman: What happened to the millions and millions of dollars that the city gave to Germantown Settlement? To the FBI: When warned that then-Mayor John Street’s office was going to be swept for a bug, why did you leave it in there, and who made that decision? To District Attorney Seth Williams: Is the reason you won't fire those three Porngate-stained assistant district attorneys because you fear the ramifications on future elected positions?

12. To the savage(s) who slaughtered Willie “Pete” Kent in North Philly: More than any other crime I’ve covered in Philadelphia, this one haunts me. An excerpt from the story I wrote for Philadelphia Weekly in 2003 helps explain why:

“The first call Letrese Bryant got was from her mother, Earthadine Christy. Turn on the news. I think something happened to your father, her mother hurriedly said.

It was Friday, Feb. 28, three weeks since Bryant last saw Pete Kent, and television cameras were encamped in the alley behind 1520 N. Eighth St., a vacant shell on a North Philadelphia block that's often overrun with junkies and dealers once darkness falls.

A body had been found face down under an old chandelier, pieces of wood and other debris. The discovery wasn't startling. Shooting galleries often attract overdoses. But this one wasn't going to be so easily explained. When police turned the body over, every run-of-the-mill theory vanished.

The man had been cut from his neck to his stomach. His chest was ripped open "like a frog in biology class," as one investigator noted. The frozen victim's heart, liver and kidney were gone, and part of his esophagus was missing. His throat had been slashed and a rope had been tied around his neck.”

The case remains unsolved, and it seems as if it will perpetually be. I’ve remained in touch with the Kent family through the years, and it’s been a dozen years of tragedy after tragedy befalling them.

So, here’s the question: What kind of monster does that to a human being? And while I don’t suspect you’ll surrender, how about sending an anonymous letter to police or the family so they can better understand why this happened? At least that could spark some level of healing.

13. To the hit-and-run driver who left me for dead in the middle of the street seven years ago: You still hear that voice in the back of your head whistling “Farmer in the Dell” and saying “Karma comin,” don’t you? Good. And if it hasn’t gotten you or someone you love yet, it most certainly will.