Quiñones-Sánchez says there are alternatives to soda tax

Joined by Taubenberger and Blackwell, councilwoman plans to vote 'no' on Kenney's spending plan 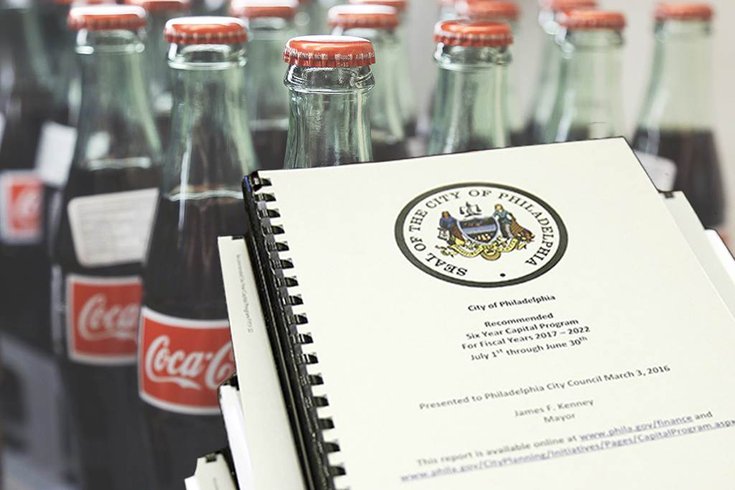 Many of the initiatives in Mayor Jim Kenney's spending plan hinge on revenue from a proposed three-cents-per-ounce tax on beverages with added sugar. With at least three councilmembers opposing the tax, the mayor will have to find nine votes of support on council to get the budget – and the tax – approved.

On Wednesday, in a vivid show of opposition to Mayor Jim Kenney's proposal to tax beverages with added sugar, Teamsters in 18-wheelers surrounded City Hall and blared their horns to let the legislators inside know how they felt.

And three city councilmembers joined them.

Attending the rally were Maria Quiñones-Sánchez (D-7th District), Jannie Blackwell (D-3rd District) and Al Taubenberger (At-large), all ready to publicly choose a side on the sugary drinks tax debate and firmly prepared to vote no.

The mayor has proposed the three-cents-per-ounce tax, expected to generate about $95 million in annual revenue, to pay for a number of ambitious initiatives, including a $300 million bond issue for improvements at parks, rec centers and libraries; $26 million for a new pre-K program; $6 million for a community schools; $550,000 for police body cameras; and $26 million into the city's pension fund.

Noting that she had 700 jobs to protect in her district at a Coca-Cola bottling plant on Erie Avenue in Juniata, Quinones-Sánchez said in an interview Thursday that the tax would hit the beverage industry too hard.

"If we are going to do a sugar tax, let's do all sugar. That way, it's less for everybody." – Councilwoman Maria Quiñones-Sánchez

A lesser tax aimed at a broader industry or product might be easier to swallow, said Quinones-Sánchez, suggesting that any product with added sugar – cookies, candy and chocolate, for example – be taxed at a lower rate across the board to raise the same, or more, revenue.

Quinones-Sánchez said she supports the move to improve civic spaces – and the rest of the mayor's proposals – without any tax at all, adding she believed there are other places in the city's $4.1 billion spending plan to find money for the proposals.

"I think first, that what all mayors do on their first budget, is articulate what their goals are," she said in an interview. "There are some things that will take longer than others."

But Rob Dubow, Philadelphia's director of finance, said last week that the city couldn't even afford the $300 million bond to rehabilitate parks, rec centers and libraries without the sugary drinks tax.

"We don’t have the resources elsewhere in our budget to pay for these initiatives," he told PhillyVoice.

In a separate interview on Thursday, Taubenberger said he, too, supported the mayor's goals, but offered no alternative ways to fund them.

"I'm not going to say anything at this point, not anything specific," he said. "But we are looking at everything."

Taubenberger said the tax is too onerous on the beverage industry, noting that a broader tax could raise similar funds without targeting one group.

"These are all, absolutely, noble causes. But the tax is not and that's a conundrum," he said.

PhillyVoice reached out to Blackwell on Wednesday for comment on her opposition to the soda tax, but she did not respond.

Quinones-Sánchez, however, maintained that new taxes aren't the only way to fund Kenney's initiatives.

"There are a lot of areas in the budget that could be looked at," she said, pointing to the high initial costs of some of the elements of the mayor's proposal.

"Does he really need $26 million in Year One [for pre-K]?" Quinones-Sánchez asked, saying the program will take time to grow and shouldn't require such a high price tag initially.

The councilwoman also said the city is "leaving money on the table" as far as real estate taxes are concerned. A recent report from the office of the City Controller Alan Butkovitz, she said, claims the city can raise $30 million in additional revenue through property reassessments.

However, on Friday, Mike Dunn, deputy communications director for the city of Philadelphia, said that $30 million is already allocated for school children - as 55-percent of all property taxes goes to the School District, he said - and the rest to existing city services.

"That [$30 million] is already budgeted for school children and existing city services," he wrote in an email. "Another revenue stream is needed for the expansion of pre-K, community schools, and improvements to rec. centers, libraries and parks."

But, the councilwoman believes that the city could tap into other revenue sources, as well.

With "$80 million in prevention dollars" earmarked for use in creating strategies to keep children off welfare, the city might be able to direct some of that funding to the mayor's pre-K initiative, she said.

"You would think that's one of the places where we can say 'that's part of our prevention strategy'," said Quinones-Sánchez. "That has not been done."

And the councilwoman noted that in 2014, through the expansion of the Affordable Care Act, Philadelphia was able to access $300 million in new federal funding.

"That's another place" where funding could be found, she said. "But, again, that hasn't been part of the conversation."

Minus any new funding sources, Quinones-Sánchez said the city could expand existing programs to do much of what Kenney hopes to achieve, at likely a fraction of the cost. For example, the councilwoman said she supported a bill passed to add a surcharge to parking tickets to raise funds for parks maintenance.

And while some may argue differently, Quinones-Sánchez said that measure has helped improve city parks.

"Maybe we could expand that," she said. "That has been effective."